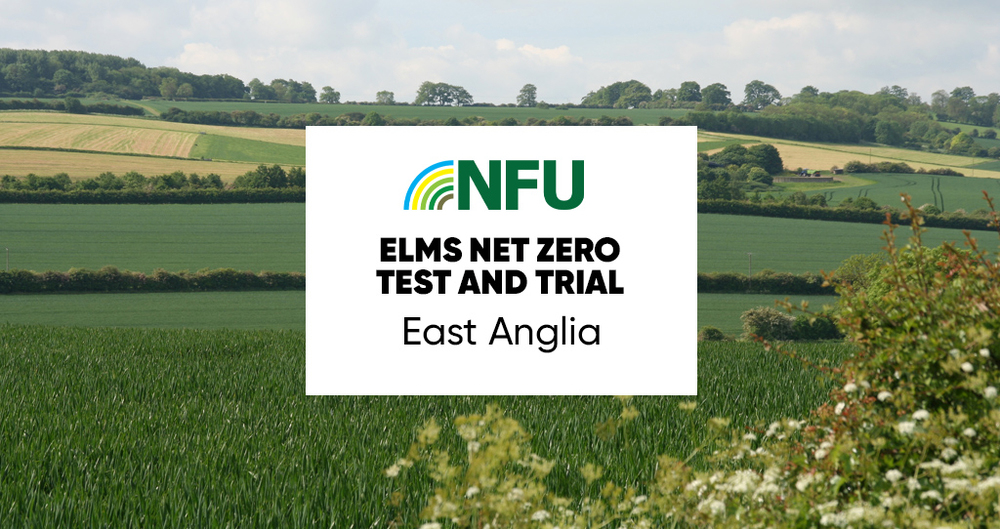 East Anglia hosted the NFU's final virtual workshop with the majority of members attending farming in the arable sector.

All 14 of the NFU's ELMs NET Zero Test and Trial workshops have now been completed along with 35 1:1 sessions.

The next phase of the Test and Trial is a telephone survey during May, when a random selection of 400 NFU members will be contacted.

The survey will gather more feedback on the barriers and issues identified through the workshops and 1:1 sessions to learn the perspectives of non-participating farmers and land managers.

You can read more about the NFU's ELMs Test and Trial here.

Discussions at this East Anglia workshop highlighted a clear demand for more options to be included in the action-based Land Management Plan (LMP) to enable farmers to take the next step.

Members were already doing many of the actions included for reasons beyond net zero as they made good business sense. However attendees felt it was important not to consider action for net zero in isolation. For example, applying manure in the spring to reduce leaching could have other unintended consequences for certain cropping systems, including damage to soil structure.

What was members' feedback?

Some members had concerns with the format of the Land Management Plan used.

"I didn’t find the Land Management Plan in its current form practical or easy to use and would have difficulty filling it in. It doesn’t offer a way to show or explain why some actions aren’t applicable or possible in certain farming systems and it’s also very difficult to consider any long-term decisions without knowing what the future funding situation will be like. I am concerned that farmers won’t make progress on net zero without funding being available. That funding is vital for businesses to cover high capital costs of things like machinery which is incredibly expensive."

The NFU continues to lobby for a simple ELMs scheme that farmers can access without the need for advice. If Defra requires Land Management Plans, this highlights the need for them to be simple enough to complete at the same time as needing to provide enough relevant information for the farm business. This is vital feedback which the NFU will be providing to Defra as a result of this Test & Trial.

The need for further support to complete a GHG calculation was also clear.

"I personally required extra help but I’m wary of money in ELMs going on advice rather than actions. On the GHG calculator I used, I was unable to find anywhere to record the area I have in stewardship. The only option was to allocate it under miscellaneous which covers roads, yards and buildings. This therefore ignores in the calculations the benefit that this land gives. We tailor fertiliser requirements to fields and there simply wasn’t enough product options in the calculator. Going forward, it would be really helpful if our farming software program would dovetail into the calculator."

High capital costs of actions and lack of support were highlighted as a restriction to taking some actions e.g. wanting to install more solar PV on farm but there just aren’t the grants available to make it an affordable option.

"The potential costs of any new actions have to be considered. Introducing new crops into a broader rotation, for example, may require the purchase of new machinery or a new storage facility. As a business we have to consider the economic feasibility of all these actions – for instance, we are unlikely to select the nitrogen fertiliser produced with the best carbon-efficient manufacturing process if it isn’t affordable in comparison to the commonly used fertilisers we are used to unless it can be justified by better nitrogen-use efficiency."

Glenn Buckingham, NFU Suffolk county chair, thought his 1:1 session provided a great introduction to net zero, particularly for those new to the topic. He found the action-based LMP a useful tool for gauging where you’re at.

"There’s a big challenge ahead but it’s vital we get people thinking about net zero; and net zero actions need to be included in any future ELMS scheme. It’s also important to make people aware of the available options for taking action and to provide guidance on how to get started in reducing emissions. This was a useful way to do that."