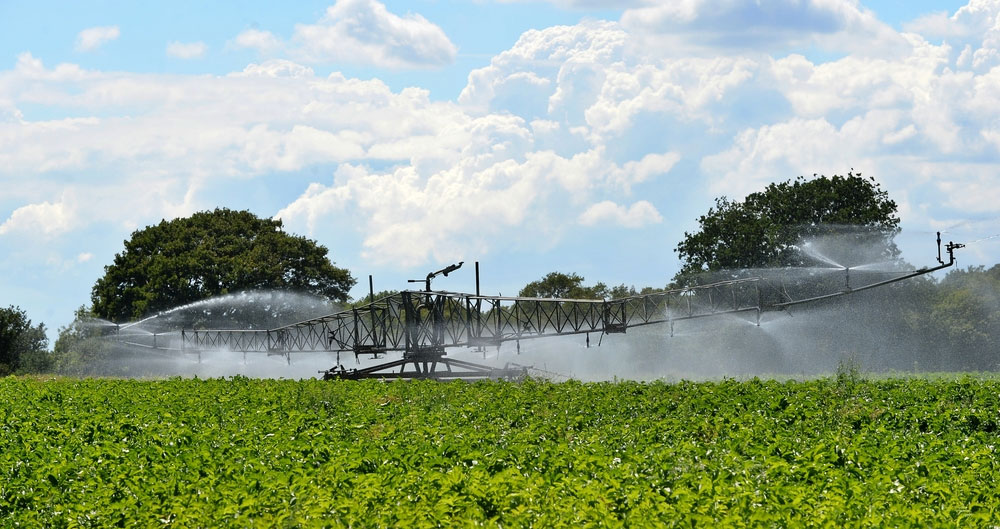 The NFU has met with the Environment Agency in East Anglia to discuss revised prospects for irrigation as the current spell of hot, dry weather continues.

The irrigated crop sector came under considerable pressure during May when crops were less mature, and there is some concern about impacts of further dry spells at the height of the growing season. We are awaiting an announcement from the Agency on its revised position for providing support to irrigators as the season unfolds.

Prolonged dry weather has led to the Agency’s announcement ‘developing drought’ status in the Cam & Ely Ouse river catchment – an operational status meaning that the Agency will increase its monitoring of the environment, reviewing its range of dry weather indicators, including groundwater levels, surface water flows and impacts on the environment. It will also escalate its communications with farmers and other abstractors.

Rainfall in the Cam & Ely Ouse catchment rainfall was just 5.5%-9.5% of the long-term average (LTA) during May. Surface water flows and some groundwater levels are ‘below normal’ and the soil moisture deficit (the ability to soak up water) is high.

Flows in the River Cam are of particular concern.

Statutory irrigation restrictions are still not anticipated for river or groundwater sources in the Cam and Ely Ouse, although the use of licence-backed low flow restrictions cannot be ruled out before the end of the season.

As groundwater levels fall, there is already some concern in the farming sector about irrigation prospects for 2021 without sustained periods of higher than average rainfall.

In Essex, Norfolk and Suffolk the extremely dry spring has seen a rapid decline in groundwater levels and early season river flows. Most rivers in these counties have shown a small sustained recovery from June rainfall and will benefit from this for the next few weeks. If summer rainfall continues at levels significantly below their average, there remains a low risk that the Agency may impose formal irrigation restrictions on some Suffolk and Essex rivers towards the end of the growing season.

The North West Norfolk catchment remains resilient, and the fenland level-based systems in Cambridgeshire are being closely managed with partners from the Internal Drainage Boards.

The Agency is closely monitoring the situation in the Upper and Bedford Ouse catchment, including the River Tove and other tributaries, where there is a higher risk of also moving into ‘developing drought’ status in the coming weeks.

Although farmers could face summer water shortages, the situation will not be severe enough to affect public water supply. Water supplies to homes and businesses are not at risk, although members of the public are being urged to save water to protect the environment.

Dry weather can cause severe environmental impacts such as fish kills.

The public is to look out for signs of fish in distress or other impacts on the environment and to report it by telephoning the Agency’s 24hr Incident Hotline on 0800 80 70 60.