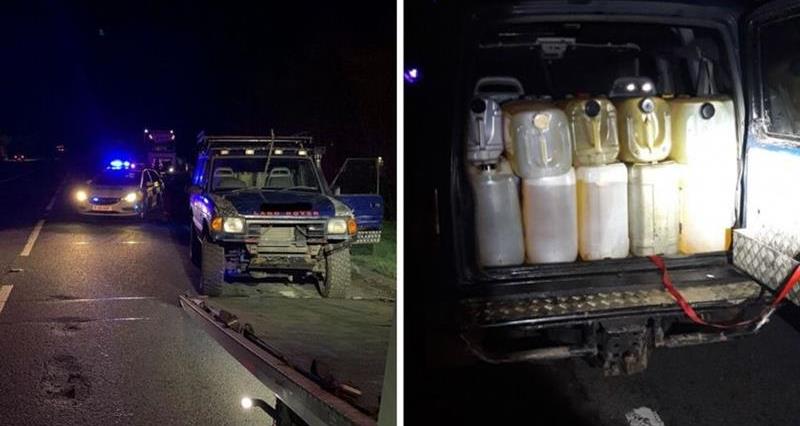 A man has been charged after police stopped a Land Rover Discovery which contained 750 litres of suspected stolen fuel.

Nottinghamshire Police say a lorry driver, who was parked in a lay-by on the A1 at Balderton, woke up to find his lorry's fuel light came on upon ignition.

He decided to report this to the force suspecting it had been stolen and officers located the Land Rover nearby, using a helicopter and drones.

Two people were arrested in connection with the incident and Daniel Joe Moore, 27, of Queen Elizabeth Crescent, Rhodesia, Worksop, has been charged with theft.

And the force has urged farmers around the area to keep reporting suspicious vehicles as thieves are using farmland and countryside paths to gain access to A1 lay-bys.

Inspector Heather Sutton, district commander for Newark and Sherwood, said: "We are appealing to farmers and landowners to continue to report anything suspicious to police as many offenders are targeting these vehicles by travelling undetected across open countryside and farmland, rather than using the main highway.

"These arrests demonstrate our ongoing commitment to tackling vehicle crime which has been identified as a local policing priority.

“The lorry driver sent us a text passing on his thanks to officers and saying he was very impressed with the response.

"As part of our efforts to tackle and reduce auto crime we have continued our work on Operation Magna, focused on tackling and reducing thefts from motor vehicles including fuel thefts.

"We have deployed multiple other covert tactics and plan to use them again in the coming months as well as sharing vehicle crime prevention advice with the public.

"As a result of our proactive activity we have seen a decline in offences but theft of diesel on the A1 remains a significant issue for us and our work with the Highways Agency and other partners will continue with further operations planned."

Insp Sutton added: "Taking a rest is absolutely essential for the safety of many drivers using this stretch of road, and thieves have been taking advantage of this to commit their crimes.

“We are asking all drivers to remain vigilant, to think about where they are parking and try to park in the well-lit rest areas which could be enough to deter would-be thieves.

"Please report any suspicious activity or information to Nottinghamshire Police on 101 or by calling Crimestoppers on 0800 555 111."

Moore has been bailed and is due to appear at Nottingham Magistrates’ Court on March 31.