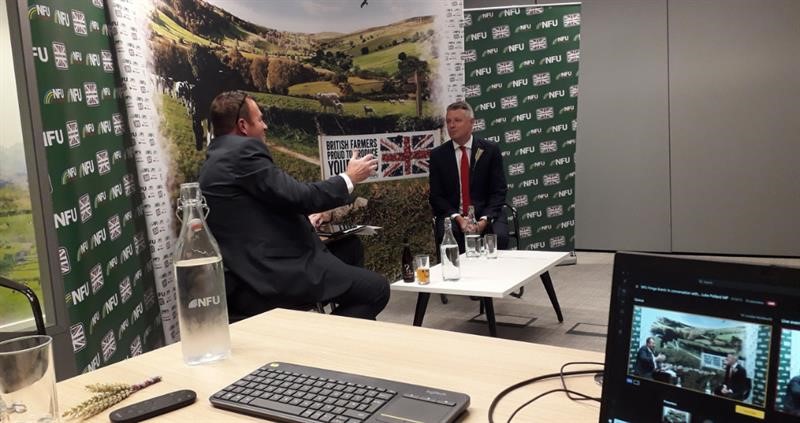 Party conference season began last weekend (19-22 September 2020) with Labour’s online conference replacement event, “Labour Connected”. Despite the virtual proceedings, the NFU had a strong presence at the conference, using the opportunity to take our key points to the heart of the party’s decision makers.

Shadow Defra Secretary Luke Pollard joined NFU Deputy President Stuart Roberts at the NFU’s Westminster office on Monday evening for a positive and engaging discussion centred around some of the pertinent issues facing Britain’s farmers that was available exclusively for NFU members.

"I don't think we've got a good enough appreciation of what's in season at any one time." @LukePollard wants the British public to #BackBritishFarming and buy seasonal fruit and veg.

What's in season at the moment? Check out our guide to find out ?????? https://t.co/7KZMMRCTso

He also talked about the success of the NFUs food standards campaign to date, highlighting that "the NFU's petition that got a million signatures was an incredible piece of lobbying."

“The farming community manages a huge amount of our natural water-cycle.” Mr Pollard recognised the role that farmers play in managing water as the original countryside stewards but stressed that farmers are absolutely essential to the future success of water policy in Britain.

During the discussion, Mr Pollard was keen to highlight one of the best ways that British farmers can get their  message across to MPs: “The most powerful bit of advocacy is getting MPs onto farm – invite them to don wellies and get involved with their rural community.” If you would like to invite your local MP onto your farm, make sure you contact the NFU’s external affairs team who can help you arrange a visit.

Thinking global, growing local – what are the COVID-19 lessons for food and farming?

Both Mr Roberts and Mr Zeichner took the opportunity to reflect on the importance of maintaining the high level of environmental and animal welfare standards that British farmers produce to. Mr Roberts stated that trade would have the biggest influence on agriculture and asserted that, if we do not reflect our values and the values of society, we will just export our conscience elsewhere. Mr Zeichner re-iterated that Defra should enshrine our food standards in law to protect British farmers.

The Q&A from audience participants generated some interesting discussion covering some of the key topics facing Britain’s farmers. Mr Zeichner noted the current confluence of difficult circumstances faced by farmers, including bad weather, a lack of certainty with Brexit, and the Agriculture Bill. He added that future policy should enable the production of more fruit and vegetables on British soil.

Join our virtual events at the Conservative and Liberal Democrats Conferences

The NFU will continue to ensure farming’s voice is heard prominently across the remaining party conferences and further into the future.

This year’s virtual conferences are a fantastic opportunity for members to be involved with discussions and ask questions to the key policy makers for our sector, which, unless you live near to the cities hosting conference or are indeed a card carrying member of the party, you wouldn’t normally get the chance to be involved in.

Find out how you can take part in NFU events at the Liberal Democrats and Conservative Party Conferences in the coming weeks here.