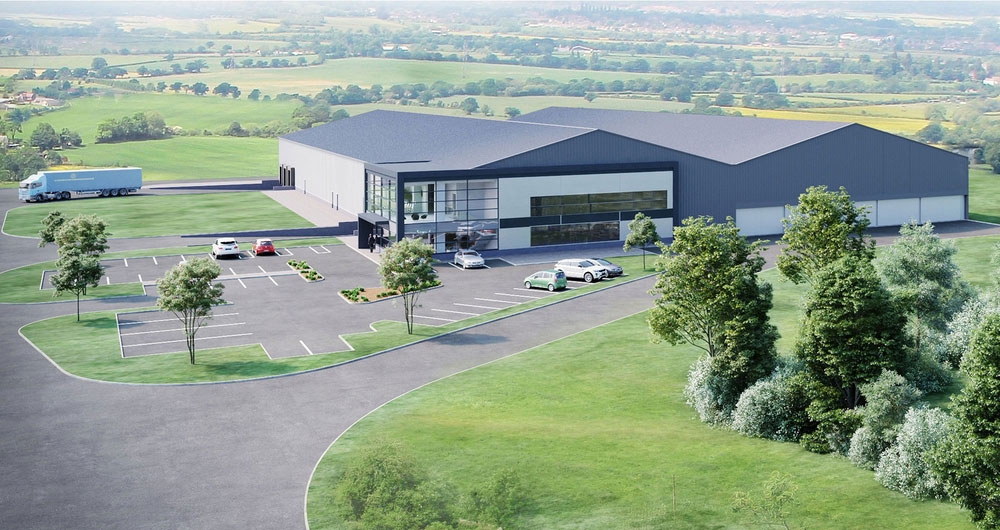 So jokes the team at Hughes Mushrooms - who make the analogy given the unstoppable pace of production and the crop's highly perishable properties.

Growing mushrooms has always been a challenging endeavour. The crop is particularly temperamental and susceptible to pests and diseases. And manipulating it to deliver optimum yields is something of a dark art that's easily undermined without skilled pickers not averse to hard work.

But this is something Hughes excels at – supplying the UK market for the past 56 years from its sizeable operation in Northern Ireland that produces both fresh and added value products.

But, with a domestic market valued at £427m a year and growing at 2% a year, plus plenty of scope to improve self-sufficiency, the opportunity arose to increase production and establish a mainland operation to improve the company's vertical integration with their retailer customers.

As with most horticultural fresh produce, margins on mushrooms are extremely tight, making it crucial to maximise the crop. So before investing heavily in a new production facility, more than two years of research was carried out – exploring how innovation could help tackle many of the problems inherent to mushrooms.

The Hughes team identified a suitable site at Holme on Spalding Moor in East Yorkshire, previously used for mushroom production and which had already been granted outline planning permission for a new large facility. Their research suggested that building a traditional mushroom farm would not be the right approach.

“We wanted to build a state-of-the-art, world-leading facility. Automated picking may still be some way off, but we believed we could use the latest technologies to deliver a great, competitive product while improving the working environment for the harvesting team,” said operations director, Ciaran Hughes - pictured below right with Technical Consultant Miles Middlebrook.

So when the company came across a unique new approach from Dutch firm – the Christiaens Group – that put the focus on improving conditions for pickers, Ciaran says it was immediately appealing.

“Skilled labour is essential when harvesting mushrooms as the decision to pick or not can make a huge difference to crop performance,” he added.

“But recruiting has traditionally been difficult as the work is not easy and on traditional mushroom farms, the picking environment can be challenging.”

More than that though, the new system also promised to improve biosecurity – another significant benefit as mushrooms are considered to be the most disease-susceptible crop in commercial production. The new system makes it much easier to control the growing and storage climates and streamline the process of moving mushrooms from growing bed to retail shelf.

Excited by the possibilities, work began on the new facility in February 2017 and just seven months later the first room was filled with mushrooms.

Although work is still ongoing to exploit the full potential of the new site, the number of unique features is impressive. 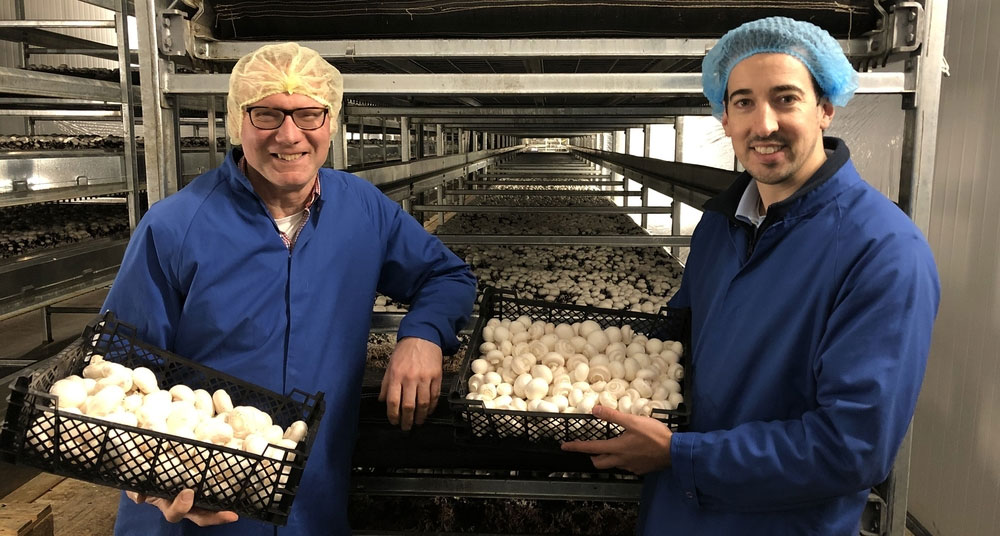 For a start the mushrooms are grown and harvested in separate ‘rooms’. This allows Hughes to treat the growing beds differently and allocate space accordingly for maximum efficiency.

An obvious benefit of the system in the growing room is that the shelving on which the growing beds sit rises up eight levels to 4.7m.

This is possible because no-one is required to pick at that height. It also means they can fit a 1,200sq metre growing area into a room measuring just 104 x 6.5m.

Overall, the room can accommodate 54 tonnes of substrate, which would be more like 40 tonnes in a room of the same size on a traditional farm.

Separating the growing and harvesting operations also helps with biosecurity. Air entering the facility is filtered to 95% of 4 microns, but the physical separation keeps the growing room clean and provides the perfect conditions to speed up the production cycle.

The growing beds also boast another unique feature – under-bed heating and cooling that allows Hughes to very accurately control the temperature of the substrate without the use of evaporative cooling that increases moisture loss.

The ability to quickly bring the substrate up to the ideal temperature, and cool it if the mycelium is over heating reduces the cycle time to deliver further efficiencies.

When the crop is ready to start harvesting the beds move into the much larger harvesting room where they constantly move round to be presented every few hours at the pickers’ station, situated at the centre.

This is a key benefit of the production system, with the mushrooms taken to the pickers rather than the other way round. The pickers’ station provides a comfortable working environment with plenty of light and room for staff. And with pickers at both sides of the conveyor belt, minimal stretching to reach the crop is required.

Equipped with scales and a supply of punnets, the pickers aim for the optimum weight of product before the mushrooms head off to the packhouse.

The moving beds allow the pickers to pick at the optimum time, with each bed being presented three or four times, a process known as graze picking.

Ciaran explains that the pickers take responsibility for the crop's performance.

“A team of pickers will pick all the mushrooms in each harvesting room and know that the better they pick over the course of the five days, the more they will be rewarded,” he said.

“With margins so tight, if you have mushrooms ready for picking they must be picked to avoid a commercial loss so the skill of the pickers is crucial.”

The mushrooms are then manually transported to the chillers, however following the next stage of investment in innovation, each punnet will travel directly to the chiller within minutes of being picked. This will further increase the product shelf-life.

Keeping the product at a steady temperature of 4 degrees is crucial to maintain shelf life and although the mushrooms leave the chiller to be weight-checked, packed and wrapped, this process takes just a minute. The final punnets of button and cup mushrooms are for sale in the shops within two days.

Ciaran says so far the many unique features of the new facility are taking the company's mushroom production to the next level.

“Our staff retention is very good, which bodes well for the future,” he added. “That said, like most businesses, Brexit is presenting us with some real uncertainties given that many of our 70 permanent full-time pickers come from Eastern Europe.”

To get going, the living organism – the mycelium – has to be 'fooled' into producing its fruiting bodies, turning from its vegetative to a reproductive state.

This is achieved by covering the growing substrate – a scientifically composted blend of wheat straw, horse and poultry muck – with a non-nutritious peat and lime 'casing' layer. The lack of food in this layer causes the mycelium to fruit in two 'flushes' over a period of just 15 days.

The crop is generally grown in the dark, but these days this is simply to conserve energy. Originally they were grown in the dark to thwart the Phorid midge laying its eggs in the emerging mushrooms.

After a two-week incubation, mushrooms start to appear and the entire crop then takes just 5-6 days to complete, with the individual mushrooms growing 4% every hour and doubling in size every day. This gives a window of just eight hours to pick the mushrooms at the optimum size.

Controlling the temperature of the substrate is essential as its possible for the mycelium to grow so fast it overheats. Water loss also needs controlling as the mycelium is only watered at the beginning and in between the first and second crops.

Manipulating the environment – temperature, humidity and CO2 levels – is at the heart of growing a successful crop. You want some of the emerging mushrooms to flourish initially and then be able to bring the others on. This allows you to achieve a staggered crop but there is a very fine line between too few and too many.

Despite their susceptibility to a range of pests and diseases, no chemicals are used in mushroom production. This is why biosecurity is so important in the growing rooms.

It's true that no-one fully understands the composting process that feeds the mycelium. Scientists have tried to replicate the exact ideal conditions and have failed. The mushroom remains something of an enigma.