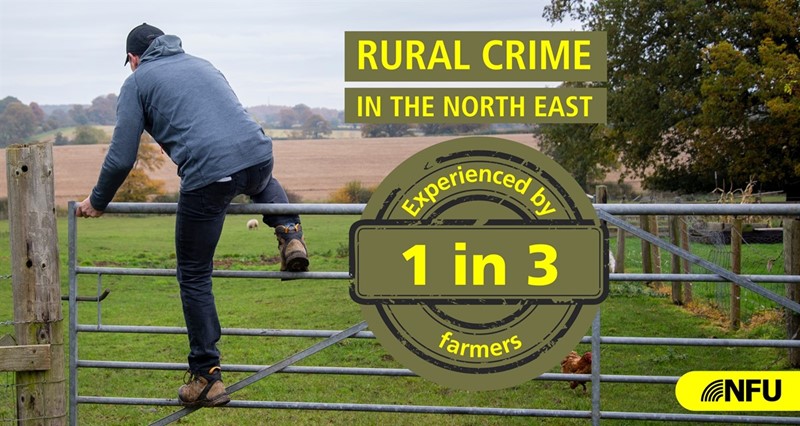 With new survey results showing that over the last 12 months one in three farmers has been a victim of crime, the NFU says it’s crucial that candidates in the forthcoming Police & Crime Commissioner elections commit to prioritise rural crime as a strategic objective.

The survey, carried out by the NFU with nearly 2,000 farmers across the country, highlighted the extent to which rural areas are being actively targeted by criminals. It also focused on the cost of crime to farm businesses, how often crimes are reported and how farmers feel about the police response as well as how much farmers are spending on crime prevention.

Nationally farmers reported facing average losses of £4,400 as a result of rural crime and nearly 60% of respondents said they believed crime levels were increasing.

Reporting levels were good, with 60% saying they reported the most recent incident to the police. But, of those that failed to do so, three out of five said it was because no police response was expected. While more than half of respondents felt that insufficient police resource was devoted to tackling rural crime, a slight majority (53%) felt that the police had taken sufficient action when they reported the most recent crime. 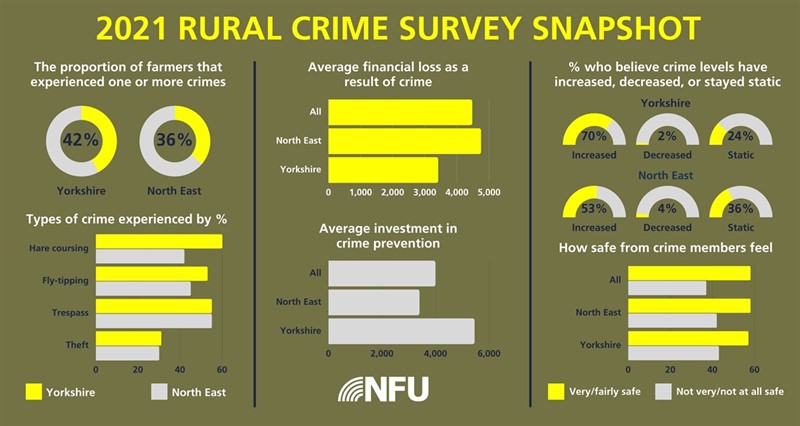 “The impact of crime on farms across our patch is the most common problem farmers raise with us time after time,” said NFU North East Regional Director, Adam Bedford.

“Many respondents said they are being targeted frequently with 13% of Yorkshire victims and 9% of North East victims being subjected to more than 10 incidents in the last year alone.

“While it’s true that the Police are beginning to recognise the impact of rural crime on individuals, families and small communities, more needs to be done to ensure adequate resourcing and joined-up local priorities – particularly in those large rural areas policed by primarily urban forces.

“We welcome the two dedicated rural task forces established in North and East Yorkshire, but desperately need better working relationships with the police in South and West Yorkshire.”

Wildlife crime, particularly hare coursing, was the crime most likely to be experienced, with 51% of victims in Yorkshire and the North East saying they were subjected to regular farm invasions. Other key crimes included fly-tipping, experienced by 49% of victims and farm theft experienced by 41%. 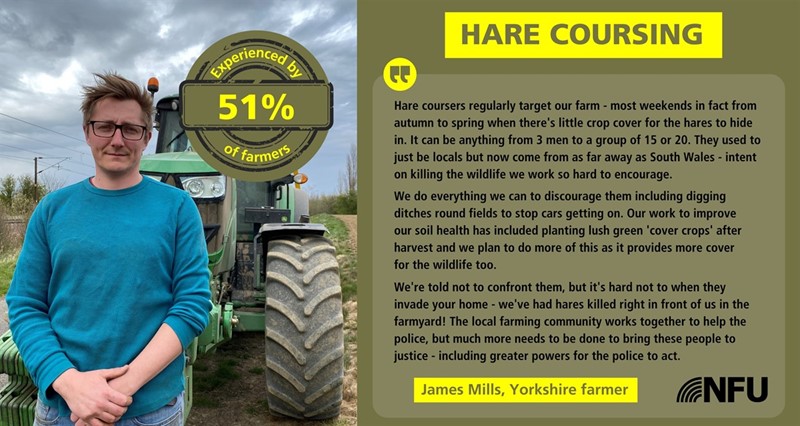 The amount being spent on crime prevention measures is significant, with Yorkshire farmers spending way more than the national five-year average of £3,994, clocking up an average spend of £5,453 compared with £3,396 spent on average by farmers in the North East.

“The NFU has been campaigning to highlight the significant impact of rural crime for the last five years and although this survey highlights that there is still a long way to go, it is encouraging to see more police resources being dedicated – in particular to proving links to serious organised crime. A new national hare coursing task force is being established and can’t come soon enough,” added Mr Bedford.

“However we also hope to ramp up our collaborative working with the seven police forces that cover our geographic area. The new Police & Crime Commissioners will have a key role in bridging the gap between the government, police and other stakeholders such as local authorities and we hope to meet regularly with them for an open discussion on the issues facing farming communities.”