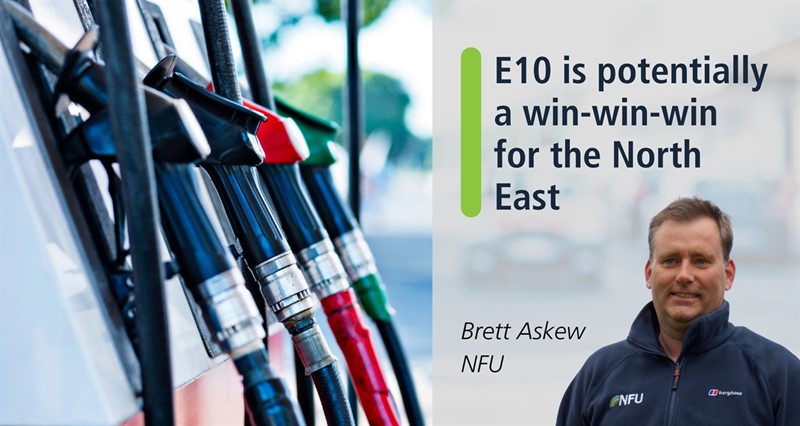 The news that from September forecourts across the country will be able to offer drivers access to fuel with a higher renewable content has been welcomed by the NFU in the North East.

The government’s green light for the roll-out of so-called E10 - a type of petrol that contains 10% renewable bioethanol – is particularly welcome in the North East, home to two bioethanol plants on Humberside and Teesside.

“This is potentially a win-win-win for the North East,” said chairman of the NFU North East Crops Board, Brett Askew.

“Operating at full capacity, our two local plants could not only provide an important domestic market for home-grown wheat that would otherwise go for export, but also a nutritious, protein-packed animal feed by-product that can displace imports of feedstuffs like soya and help deliver the government’s green agenda with a more renewable fuel for the nation.”

Alongside the NFU, the UK’s renewable fuel sector has long called for the rollout of E10 and has struggled with profitability in the interim – the Vivergo bioethanol plant on Humberside is currently mothballed.

“For the E10 rollout to deliver maximum benefit, we need to see Vivergo reopen and for both plants to use UK grown rather than imported feedstock as they ramp up production,” added Mr Askew.

“In this scenario, the two plants together have the potential to use 2 million tonnes of wheat a year and produce 800,000 tonnes of their DDGS or ‘distillers grains’ animal feed by-product, helping UK farmers move closer to achieving their goal of net zero greenhouse gas emissions by 2040.

“We will have to see how this plays out, but it is a great example of the key role UK farming has in delivering solutions for the nation as we strive to respond positively and creatively to climate change.”

National crops board chairman Matt Culley also commented, saying: “The NFU has long been calling for the government to authorise E10 fuel and it is great to hear that it will start to be available at UK forecourts from September.

“Not only will this mandate provide a boost for UK farmers, it will play an important and immediate role in delivering the government’s green agenda, especially as it may be some years before we are able to make a countrywide shift to fully electric vehicles.