Cross political party recognition that a comprehensive plan is needed to protect Cumbria’s fragile agricultural industry was achieved after a delegation of NFU representatives laid bare the extent of challenges facing the county’s farmers when visiting Westminster on Tuesday 19 July.

Cumbria is in the enviable position of having Members of Parliament from all three main political parties looking after constituencies within the county – with the National Farmers’ Union (NFU) enjoying a good working relationship with all. 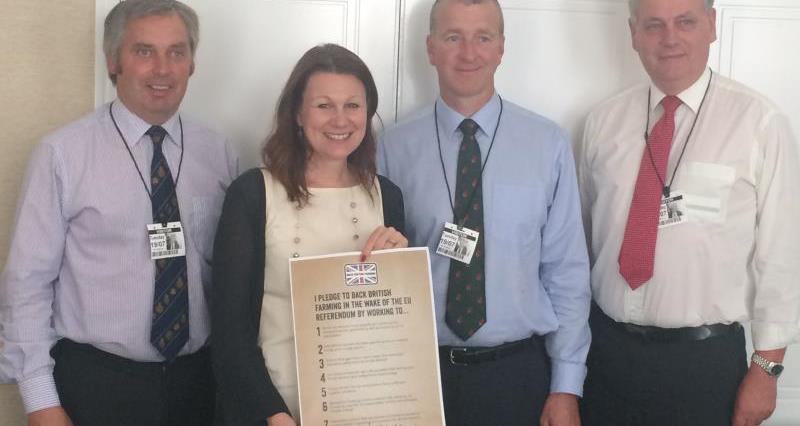 Sue Hayman, the Labour MP for Workington, helped bring all Cumbrian MPs together to join forces so that they speak with one voice in fighting Cumbria’s corner in Parliament. Her group wished to hear about the specific challenges facing Cumbria’s dairy farmers directly from the NFU after they all received a letter from the NFU Cumbria County Chairman David Raine about the impact on the county’s economy of the down turn in milk price and the number of farmers leaving the industry.

Dairy was the focus of the discussion, but given the impact Brexit will have on Cumbria, the NFU delegation also broadened discussion out to the following key areas:-

Following the meeting, Sue Hayman MP asked the following question at Business Questions in the House of Commons.

“The EU Referendum Act 2016, which we debated in the last session, doesn’t contain any requirements for the Government to implement the result of the referendum, nor to set a time limit by when we should trigger Article 50. I’ve had a lot of constituents come to see me who are concerned about the implications of this, and I’ve had a meeting this week with local farmers who are particularly concerned about the EU funding streams, and are asking for assurance on that. Can the Leader of the House clarify if we will have an opportunity to debate these very important matters as soon as possible after our return from the summer recess?”

The Leader of the House replied: “Because of the principle of parliamentary sovereignty, it is ultimately for parliament to determine our membership of the European Union, but the Government has consistently said and acted on the basis that the referendum outcome would be decisive, and that the Government would honour the result, whatever that result turned out to be, and that is the approach that the Government intends to take. I think the country would expect no less.

“On the serious point she makes about agriculture, this is a matter that is very much at the top of the priority list for the new DEFRA Secretary. She is going to be considering along with the Secretary of State for Exiting the European Union how we address this question of the next few years of farm funding while we are still in the EU, particularly for those programmes that might carry over beyond the actual date of exit. I’m sure that there will be opportunities for parliament to this and other matters early on after recess, and of course the Secretary of State for Exiting the European Union will have a dedicated question time where the honourable lady and other members will be able to press him on these matters.”

Alistair Mackintosh added: “Sue Hayman MP was particularly interested in the failings of the RPA and keen to hold the Minister to account on this. The meeting gave us the opportunity to champion food and farming in Cumbria and encourage the MPs to raise it up the political agenda. There was a commitment from all parties to put forward the topic of Cumbrian agriculture for a Westminster Hall debate and also that all parties would write to the new Secretary of State highlighting Cumbria specific issues.”