Every year the Royal College of Defence Studies visit Lancashire farms as part of a North West tour - and 2021 has been no different despite Covid-19.

The Royal College of Defence Studies (RCDS) is the senior college of the Defence Academy of the United Kingdom.

It provides strategic education for those officers of the Armed Forces, and equivalent civil servants, who have the potential to reach the highest ranks and who must therefore understand and be comfortable working at a strategic level in a cross-government and international environment. 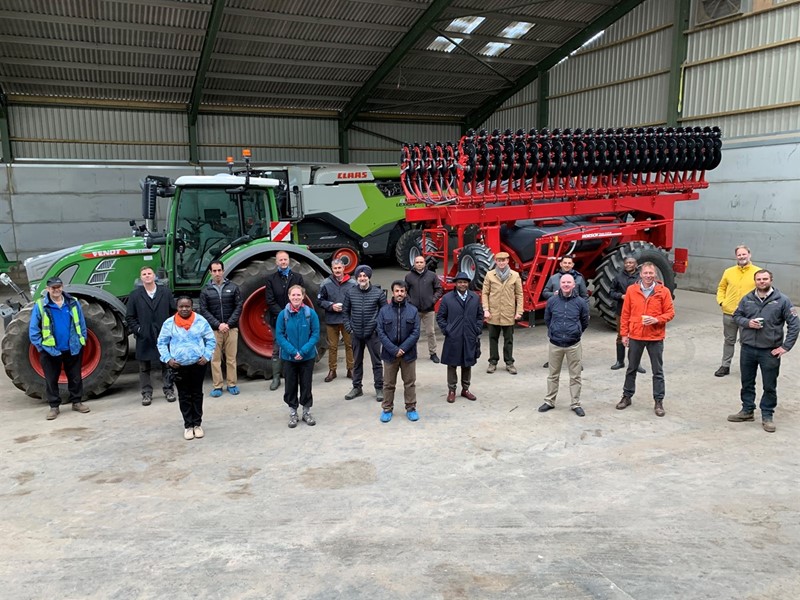 Since 2012, the RCDS has worked in conjunction with the NFU, organising an annual visit to Graham Young’s dairy farm in Samlesbury, Lancashire as part of the 12-month course, based in Belgravia Square in London.

This year’s international students, from 50 different countries, have sadly been unable to witness aspects of life outside of the capital due to the pandemic.

However, after NFU North West Combinable Crops Board Chairman Olly Harrison, dairy farmer Graham Young and NFU Lancashire County Adviser Liz Berry presented via Zoom in 2020, the students decided a trip to the two farms was a necessity and planned with the NFU for in-person visits to take place.

On Tuesday 25 May, a delegation of 32 students, split into separate teams, visited arable farmer Olly Harrison’s Water Lane Farm in Tarbock, Merseyside before heading up the M6 to Graham Young’s Greenhurst Farm in Samlesbury, Blackburn. Another 34 students had also visited Graham’s farm the previous week.

Kerry Benstead, course design delivery officer for the RCDS, said: “We have an ongoing relationship with the NFU in the North West and view these visits as an essential opportunity to learn about the rural economy.

“Practical people, the group wanted to see how the arable and dairy farms worked so we’re really appreciative of Olly and Tom Harrison, Bill Webb, Lisa Edwards, Jonathan Jackson and Graham Young for freely giving their time and allowing these visits to take place in a Covid-19 secure manner.”

This year also marks the first visit of the RCDS to Olly Harrison’s arable farm. Recycling arboreal tree waste into biomass is a huge part of his diversified business and the delegation asked many questions about his 600hp woodchipper which turns the waste into useful biomass for heating the farm and sends electricity into the grid.

Olly explained how he direct drills all of his corn into the residue of the last crop and tries to sell as much of his crop forward as possible.

Subsidy was a common theme coming from the questions the group fired at Olly, so he informed them that he only receives payments on 20% of the land he farms.

Olly said: “This is why I have so many diversifications. We have office space to hire out which provides a constant income as well as solar panels and the wood chip burner.

“During lockdown I also purchased three motorhomes which I’ll hire out during the summer months as holidaying in the UK becomes more popular. I’m always looking for different revenue streams. I grow sunflowers and now have a maze. In it’s first year I halved the profits with charity and still made a £40,000 profit.

“My main problem will continue to be the weather. That’s what sets the yield for us all.”