With a spanner in hand, qualified electrical engineer Stephen Fawcett’s next goal in life is to restore to glory a tractor bought new in 1966 by his grandfather. With skill and patience, he’ll undoubtedly make the David Brown 880 Selectamatic model relevant, exciting, and desirable for a modern audience – something he’s done successfully with the NFU brand in Lancashire for the last 35 years.

Now sixty years old, Stephen decided to retire from his position as senior group secretary in Chorley at the beginning of April.

His career began with the NFU back in July 1986 when he was appointed as an assistant group secretary at the now defunct Padiham group. He was no stranger to the industry, coming from a farming family and having spent his youth as an active member of Samlesbury YFC. 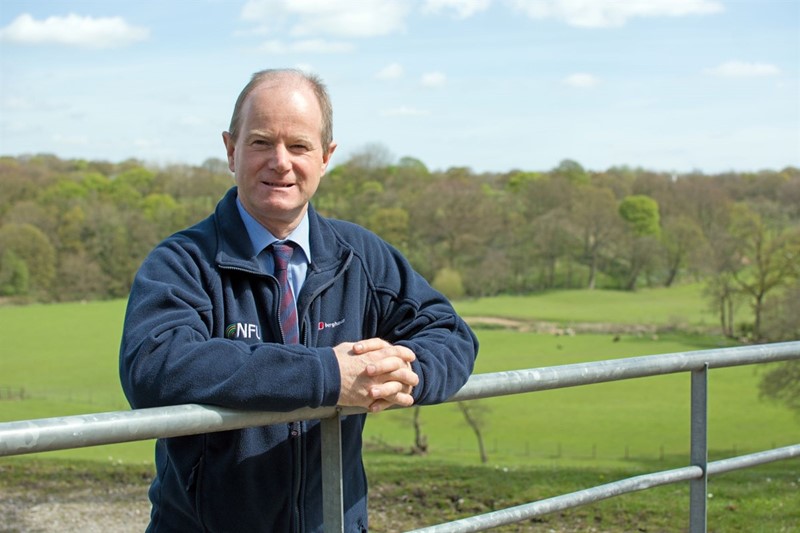 “I was working as an electrical engineer designing circuitry for a company in Blackburn when reading the Farmers Guardian one Friday night, I noticed the advert for the assistant group secretary position at Padiham,” reminisced Stephen.

“The Padiham building was pretty bleak. It had an outdoor toilet and I remember using NFU campaign posters to hide damp and mould patches on the walls. We shared one dog and bone telephone, one typewriter and had no computers. Insurance accounts were done manually by writing up in ledgers before issuing invoices from the typewriter.

“I very much doubt anyone in the future will witness the scope and pace of change in working practices that I have experienced throughout my 35 years with the NFU. Technology has completely changed the job role and with increased regulation, legislation and compliance, the role has changed out of all recognition to when I started.”

Stephen was the assistant to Ken Duxbury and together in 1990 they relocated the office to Clitheroe Auction Mart. A year later Stephen became the senior agent and recruited business partner Colin Metcalfe and the pair renamed the business NFU Clitheroe and began building up an enviable client base and trusted reputation.

In 2004 Stephen and Colin moved into the current NFU Clitheroe office on Church Brow. The building used to be occupied by Cook and Smith Insurance Brokers. They’d been strong competition because they had previously been the NFU secretaries before setting up as an independent brokerage and had naturally retained a lot of business from local farmers who remained loyal to them.

“Taking over their office in 2004 was quite ironic and certainly beneficial for the agency.” said Stephen whose hobbies and interests are all things motor sport, together with actively being involved in stock car racing with his sons.

Seeking a fresh challenge, Stephen decided to make his final NFU switch in June 2007 when he teamed up with Jackie Doran at NFU Chorley. In 14 years, they have grown the business considerably from the office on the Ackhurst Business Park.

Stephen has many memories, good and bad, from being chased by a pair of Rottweilers and having to clear a five barred gate to escape, to a staff team building event at Chorley when it was decided to go to Go Ape. Not a good idea when you have a poor head for heights.

Unfortunately, the main event as a memory was 20 years ago in 2001 with the foot and mouth crisis, something Stephen hopes we never have to experience again.