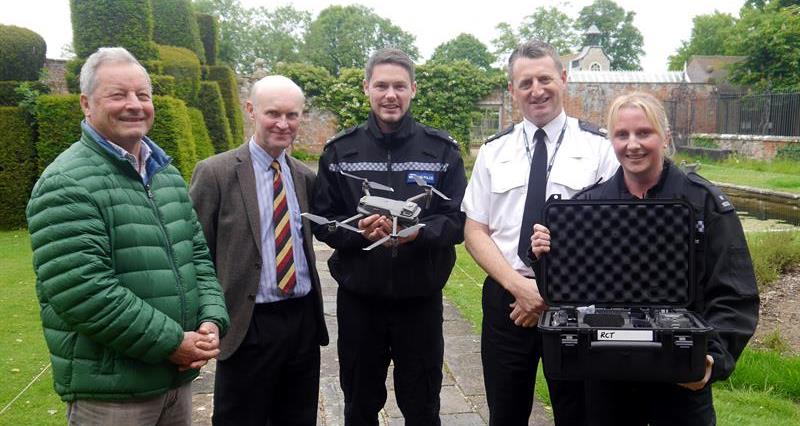 Wiltshire Police have a new eye in the sky thanks to the NFU, which has bought a drone that officers will be able to use in the fight against rural crime.

The Mavic 2 drone will be used to help find criminals on farm land, gather evidence of crime, provide evidence for use in prosecutions and capture the full extent of criminal damage.

Wiltshire is a target for many types of rural crime and the drone will be particularly useful when it comes to one of the most troublesome: hare coursing, which causes significant damage and stress for farmers.

Hare coursers will smash gates and fences, cut open locks, and land and crops are often damaged.  If confronted, coursers become threatening and aggressive, and can resort to violence. As 80 per cent of the county’s land area is farmed, and much of it is away from main roads and access, finding them can be very difficult.

Figures from leading insurer NFU Mutual show that the cost of rural crime in Wiltshire is around £800,000 a year and this figure is steadily rising. Wiltshire Police receive about 400 reports of poaching (including hare coursing) every year.

Now rural crime officers have access to their own drone, they will be able to launch it very quickly when an incident is reported instead of having to wait for support from officers in other parts of the county, which can take some time to arrive.

NFU regional director Melanie Squires said: “Wiltshire Police approached us to see if we could help fund additional equipment to aid their work, and support our farmers and rural businesses. Given the significant level of hare coursing in this county, we were happy to help, in return for the use of the drone being focussed on our farming and rural communities.

“For me this is an example of true partnership working between farmers, NFU members and staff, and the police. We will be closely monitoring and reviewing this pilot project to assess its value and impact, and to learn any lessons for future work.”

NFU Wiltshire chairman Mark Jeffery said: “This sophisticated equipment that the NFU has given to the rural crime team in Wiltshire will allow the police to react quickly to incidents in the countryside and gather better, more useful evidence to help bring criminals to justice.”

Wiltshire Police operations superintendent Phil Staynings, who oversees the rural crime team said: “The Force is always looking for new ways to embrace technology to support operational policing and we are really grateful for this support and funding from our partners.

“Whereas the wider force already has drone capability, this new drone will be another excellent tool for tackling criminality that specifically affects our isolated rural communities. Being able to cover large areas of land quickly means there will be nowhere for criminals hide. It can gather aerial footage of the damage caused to farm land which can be used as evidence to support prosecutions.

“The drone is going to really help our officers disrupt the criminals that plague our farms and rural businesses, such as hare coursers. The message is clear – rural crime will not be tolerated in Wiltshire.”