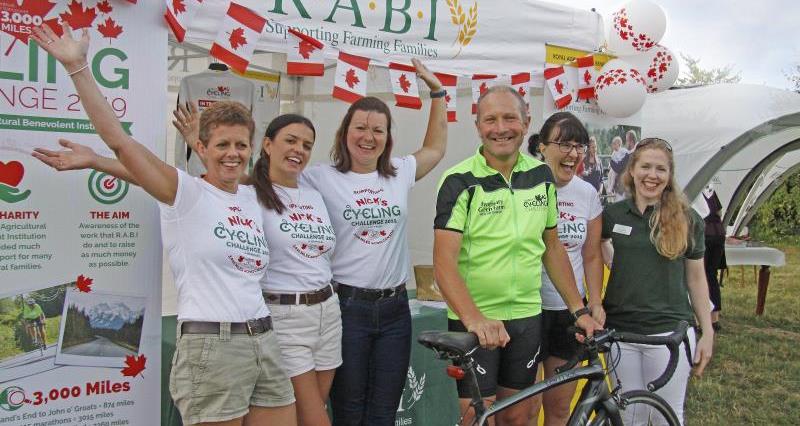 The challenge starts in Montreal on 21 June 2019 and will see Nick and his trusty bike travel across six states and through the mountainous terrain of the Rockies, before finishing the ride at Inukshuk, an iconic stone sculpture on the Vancouver waterfront.

Nick and his wife Claire own and run Frogmary Green Farm, an arable and poultry operation in South Petherton, and have been supporting RABI for many years through events hosted on the farm, including the Great British Beef Week Supper.

Last year Nick undertook a ‘trio of triathlons’ which raised over £1,600 for the charity. The support he received during his triathlon challenge and the money raised for RABI was all the motivation he needed to devise the Canadian cycling challenge.

“I realised my body, at 50 plus, was still fit enough to be challenged. So, on the dark evenings of November, I slowly came up with this challenge. What’s not to like about Canada? English speaking, beautiful farming countryside to cycle through and generally flat apart from the Rocky Mountains! You never can tell what’s around the corner, so to raise money for a charity that supports others less fortunate than myself gives me great pleasure,” said Nick, who has ramped up his triathlon training regime and embarked on a year-long physical fitness plan in readiness for the challenge.

“Cycling across Canada sounds daunting but it’s a challenge I know Nick will rise to. The very fact that he is undertaking such a gruelling physical and mental personal test in R.A.B.I’s name is extremely humbling,” said RABI’s chief executive Paul Burrows.

“As well as raising funds for RABI Nick is also great at raising awareness. Now, through his efforts, even people in the Rockies will get to learn a little about what we do!”

• For more information on Nick’s Cycling Challenge and to donate, visit uk.virginmoneygiving.com and search NICK BRAGG or go to www.frogmarygreenfarm.co.uk.