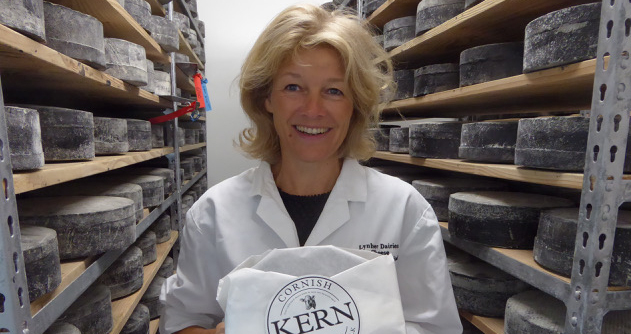 Cornish Kern cheese produced by Lynher Dairies has been crowned Taste of the West’s Supreme Champion Product of 2020.

It was selected from a group of 25 champion products from the Taste of the West Awards, and judges were blown away by its “sweet aroma, solid bite and a healthy dose of rich dairy flavours.”

Owned by Catherine Mead (pictured above) and based near Falmouth, Lynher Dairies is the sole producer of both Cornish Kern and the iconic nettle-wrapped Cornish Yarg.

Both Kern and Yarg are made by hand in open vats by a small team of dedicated cheesemakers using milk from Lynher’s herd of Ayrshires.

“The top two products are fantastic representatives and ambassadors for our wonderful dairy sector here in the South West.”

The Supreme Champion award is just the latest accolade for Cornish Kern, which has also been named Supreme Champion at the World Cheese Awards in 2017, and won Taste of the West’s Champion Cheese award in 2020. It has even been served to first class passengers of British Airways.

The Reserve Supreme Champion Product award went to the Salted Caramel Gelato made by Baboo Gelato near Bridport in Dorset. Judges described it as “the perfect ice-cream; smooth as silk and richly creamy with a good balance of caramel and salt.”

John Sheaves, chief executive of Taste of the West, said: “At a time when we are all being significantly challenged, this is a superb result. Not least because the top two products are fantastic representatives and ambassadors for our wonderful dairy sector here in the South West.

“At a time when this important sector is being asked some serious questions about sustainability, it is heartening to see two brilliant products being produced locally with minimal impact on the environment, and being rightly recognised for their quality, integrity and provenance”.

The Taste of the West Awards is the largest regional food and drink awards programme in the UK and has been running for over 25 years.

The annual programme rewards the very best food and drink made by South West producers.