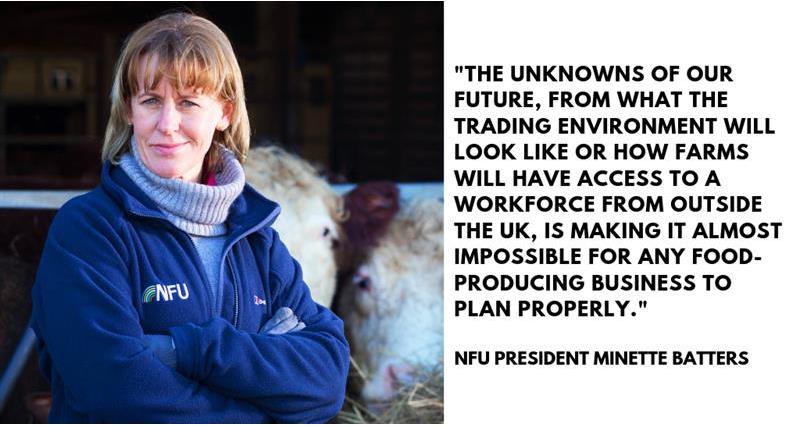 The latest member survey from the NFU of 732 farmers and growers across the country shows that:

NFU President Minette Batters said: “These results paint a very stark picture of the true extent Brexit uncertainty is having on farming businesses. The unknowns of our future, from what the trading environment will look like or how farms will have access to a workforce from outside the UK, is making it almost impossible for any food-producing business to plan properly.

“Productive, profitable and progressive farms are central to our ability to produce safe, traceable and affordable food for the nation, all while protecting and enhancing our cherished countryside.

“Confidence to invest is crucial if we are to continue to serve the country in this way because farming is a long-term business. There will be British farmers out there lambing now with no guarantee about what market they will be selling into in three months’ time, let alone a year or two down the line.

“With 70% of agricultural exports sent to the EU, this market is so important for our industry, which is why the NFU continues to call for free and frictionless trade in any Brexit agreement.

“The NFU has been very clear that the UK must avoid a no-deal Brexit, with its effects so clear to us all. An effective trade embargo for exports of animal and animal products, and the very real potential of the government unilaterally lowering import tariffs that could see imports of food produced to lower standards than our own, are just two reasons why I have been clear that a no-deal Brexit would be catastrophic for our nation’s farmers. Once you turn off the food production tap it’s incredibly difficult to turn it back on again, if at all.

“Farming is one of the most affected industries by Brexit and we must all remember the strategic importance of food and farming to the nation. This simply must be recognised in any Brexit outcome, as well as in the Agriculture Bill making its way through parliament.

“I continue to urge the government to take all the necessary steps to achieve a deal with the EU, that meet the NFU’s six principles agreed at an Extraordinary meeting of its Council in December.

The six principles agreed by the NFU’s Extraordinary Council are: