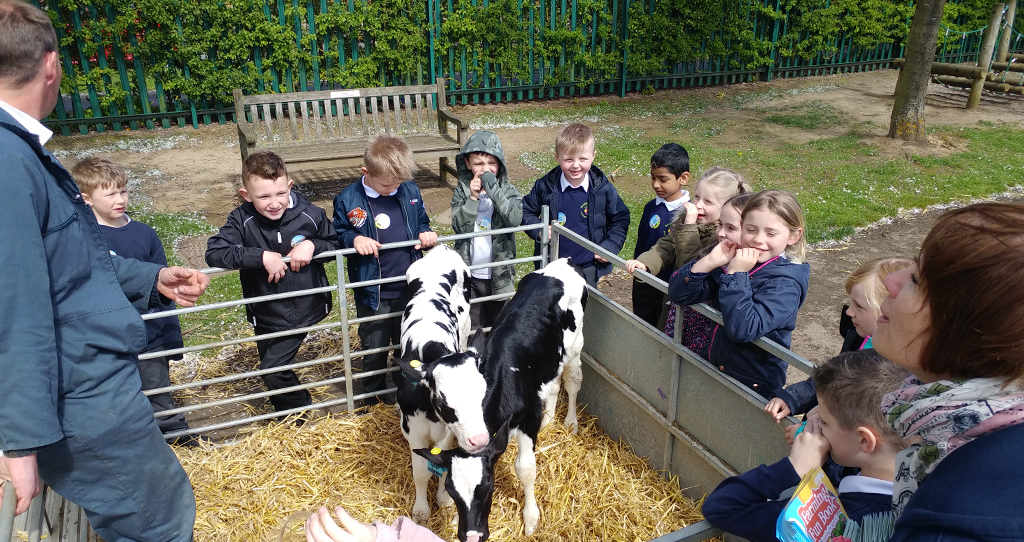 The NFU's Discovery Barn, a tractor and two dairy calves got the next generation thinking about British food and farming on a great day for pupils at Brambleside School, Kettering.

"I want to be a farmer because of the tractors!”, said one youngster as he gazed in awe at the Claas tractor parked in the playground. It, along with two farmers and the NFU’s Discovery Barn had travelled to the urban setting of Brambleside Primary School, Kettering to help them with their curriculum work on food and science.

The NFU first visited the school in 2011 with the Let’s Talk Farming roadshow, complete with host Johnny Ball, some lambs and a tractor. Market Harborough group secretary Tom Shepherd’s friend, Evelyn Clawson, had asked if the NFU could come to the school where she worked to talk to children about food and farming as part of a whole-school project.

This year’s visit found Market Harborough branch members Fay Smith and Andrew Rees in the less familiar environment of a school playground. Fay drove the farm’s tractor to the school and the children were allowed to sit in it while they learnt about how useful a tractor is on the farm, about field cultivations, how tractors are guided by satellites and how a PTO works. And, of course, they found out where the horn was!

Tom also came along to lend a hand. He said:

“It’s a really rewarding day out of the office. For some years we’ve been able to help Evelyn to teach the Brambleside pupils more about where their food comes from and to connect them with our industry. My children attended this school, so it has been a great way to stay in touch and to see more generations of youngsters enjoying our farm-comes-to-school day.”

Andrew brought two dairy calves in his trailer and set up a pen so that the children could stroke the two-week-old Holstein calves. The children were encouraged to talk about where milk comes from and how important it is as part of our daily diet - and with science in mind, the life cycle of a cow.

They were enthusiastic in their questioning of Andrew, wanting to find out what the calves ate, how old they were, their names and why they had big yellow 'earrings' in their ears. Andrew was somewhat foxed by one question, though: “Do cows wear hair accessories when they grow up?” Um... 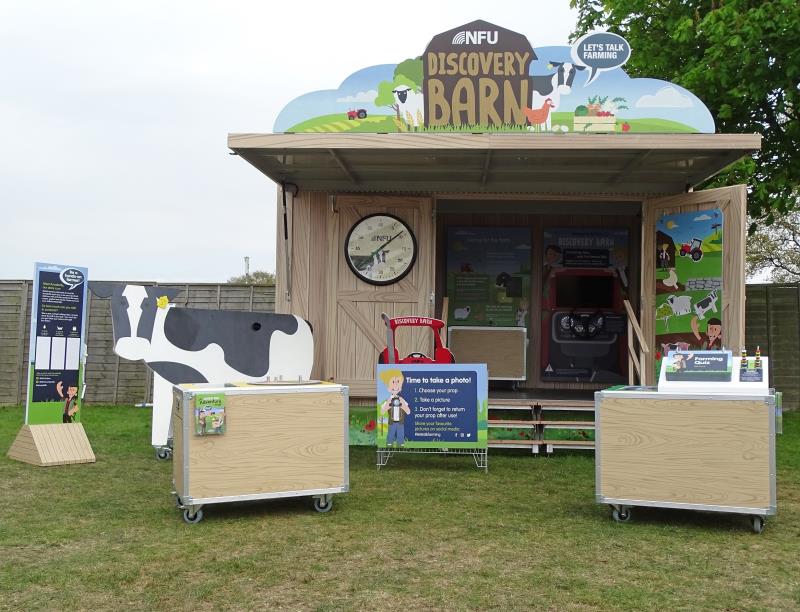 Over the course of the day, the whole school of nearly 400 pupils were able to use the resources in the Discovery Barn. Pupils milked a model cow (Annabelle), found out about the farming year using a magnetic maze, 'drove' a tractor on the farm tour tractor experience, learnt facts about sugar and farmers’ environmental work by answering quiz questions and expended lots of energy throwing bean bags at the 'farming champion' game.

The NFU's education manager, Joshua Payne, has been working with Evelyn to develop the NFU’s new science curriculum resource packs.

Aimed at key stage one (five to seven years old), the Science Farm resources include lesson plans, ideas and activity sheets that explain in a fun and engaging way what happens to favourite ingredients from farm to fork. The resources are downloadable and easily accessible for teachers who want to incorporate farming into their lessons.

“Farming is such a natural context for so many areas of the key stage one science curriculum – children will get to learn about life processes and their own bodies all while discovering about the countryside environment.

“It was great that we were able to have such a fun and productive day at Brambleside. Children benefit so much more from practical, hands-on learning. Experiences from real life are so much more memorable and mean more to them than reading words."

Two new key stage one resources featuring Lifecycles (cows, sheep, chickens and humans) and Hedgerow Habitats have just been added to the suite of curriculum packs. Each features a video, with pupils from St Barnabas School in Yorkshire and Wombridge Primary School in the West Midlands helping to explain the projects featured in the packs. The practical projects help cement pupils’ scientific learning.

If you'd like to take part in an NFU farm visit, you can find out more here.

You can also visit nfuonline.com/schools to find our education resources for teachers in primary schools.