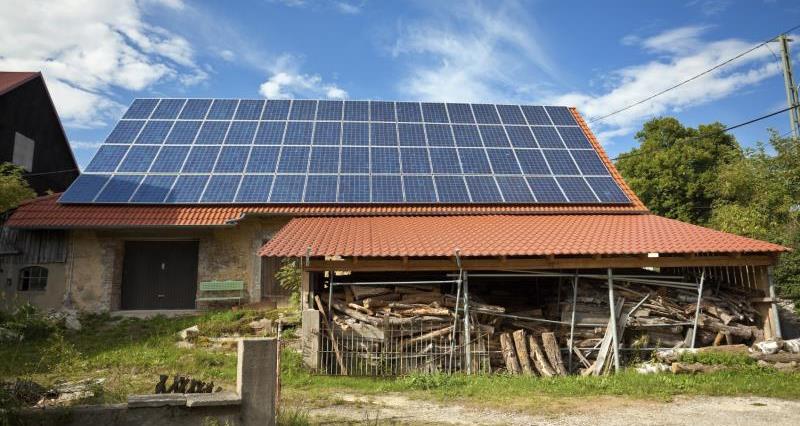 Many farmers have diversified into renewable energy

The environment and climate change may not have been top of the bill in the run-up to the General Election; and President Trump may have turned his back on the worldwide transition to clean low-carbon energy.  Nevertheless, on two occasions so far this June, renewable energy technologies have accounted for around half or more of Britain's electricity needs. At the same time, grid carbon emissions have fallen below 100g per kilowatt-hour, meeting the target set by the Committee on Climate Change for 2030.

Around lunchtime on Wednesday 7 June, Britain's electricity grid was running at a steady and best-ever level of about 55% renewable power.  Solar, wind and hydro power, plus large-scale biomass generation at Drax power station added up to 19.3 gigawatts (GW) of output, even leaving out the smaller distribution-connected bioenergy like AD plants.

Similar peaks in wind and solar output on Sunday 11 June saw grid carbon emissions below 100g per kilowatt-hour almost continuously for 11 hours from 0845 to 1945. The independent Committee on Climate Change has set this as an average target level of low-carbon electricity production for the year 2030, but it looks likely to be routinely exceeded for short periods this summer.

This marks a record level of "decarbonisation" of our national electricity supply.  According to the Drax Electric Insights online 'dashboard', estimated grid carbon emissions intensity fell below 100g/kWh (grammes of CO2 per kilowatt-hour) from about 2.20am to 5.30am early on 7 June, and then throughout the middle of the day from about 10.45am to 3.15pm. And it happened again on Sunday 11 June!

Such a level of UK electricity supply decarbonisation is what the independent Committee on Climate Change has recommended should be achieved (on average) by the year 2030.

Getting there some 13 years early, even if only for a few hours at a time, shows that this low-carbon electricity goal is certainly an attainable one.