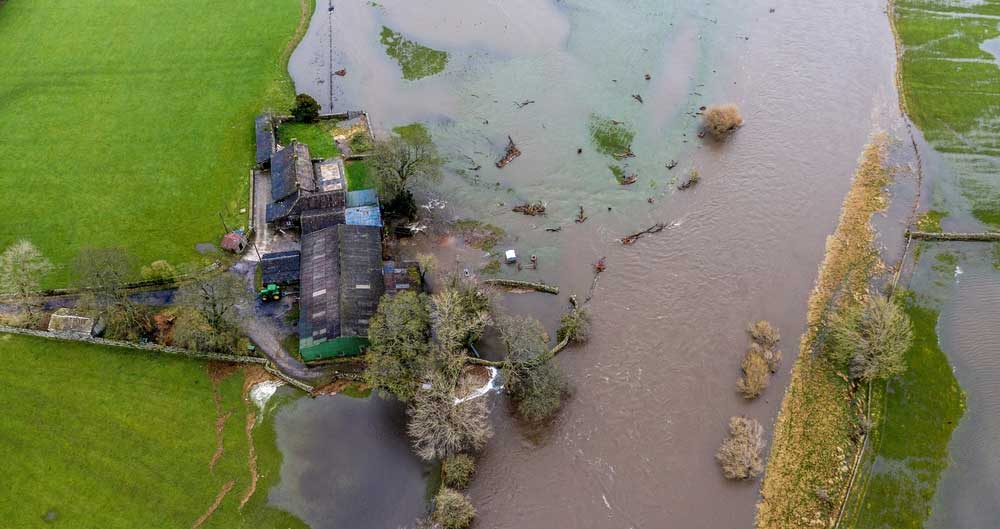 Pictured above: A flooded farm in West Yorkshire during Storm Dennis, February 2020

Intense NFU campaigning has resulted in the government increasing its Farm Recovery Fund pot by £6m, taking the total funding available to £10m, to help farmers affected by torrential rain in February.

This third phase of the Farming Recovery Fund will cover farmers who are located in parts of Herefordshire, Shropshire, Staffordshire, East and North Yorkshire, and further extension in Nottinghamshire, Worcestershire and Gloucestershire.

These specific areas were announced on 6 April and have been narrowed down from the earlier release made by Defra on 20 March. The NFU continues to make the case for other areas it believes should be included in Phase 3 of the Farming Recovery Fund to ensure those severley hit by Storm Dennis are included.

The news came on the same day that the government confirmed it intends to relax the crop diversification requirements known as the 'three crop rule' for farmers for 2020, as farmers in flooded areas will have difficulty complying with the rule this year. Click here to read NFU President Minette Batters' response to that announcement.

“This welcome increase in funding being made available, which the NFU has been calling for as a matter of urgency, will be a huge relief to those farmers affected by Storms Ciara and Dennis. We know of some farmers facing bills of hundreds of thousands of pounds from uninsurable losses, including high value horticulture crops rotting in the ground. And it’s been impossible to get new crops planted due to five months of incessant rainfall.

“With these types of extreme and volatile weather events becoming ever more frequent, the NFU will continue to work with government to ensure it takes all the steps necessary to protect productive farmland, so farmers can continue to produce a supply of safe, traceable and affordable food for the nation and protect and enhance our iconic British landscape.”

Click here to visit the Gov.uk website for all the latest advice for farmers and land managers who have been affected by flooding.

More about the Farming Recovery Fund

The Farming Recovery Fund was opened to support the recovery from the June and July 2019 floods in North Yorkshire and Lincolnshire, and then was extended to cover the further flooding in parts of South Yorkshire, Gloucestershire and the Midlands in November 2019. The announcement on 20 March 2020 brings the total funding that the government has made available for farmers to recover from exceptional flooding, during 2019 and the first two months of 2020, up to £10 million.

Under the Farming Recovery Fund, affected farmers in eligible areas can claim for grants between £500 and £25,000 to cover a number of uninsurable repair costs, such as the re-cultivation of farmland, including re-seeding, replanting cover crops and alleviating soil compaction.

More information on the application dates for the extended Farming Recovery Fund will be released in due course, which will include details on how to apply and guidance on eligibility within affected counties. Click here to visit the Gov.uk website for the latest information, and the Farming Recovery Fund handbook, which has more detail for those eligible under previous funding rounds.

If you have been affected by recent flooding and have already repaired damage caused, you should keep records of all relevant evidence, including receipts and before and after photos, in order to help the RPA process eligible applications promptly.