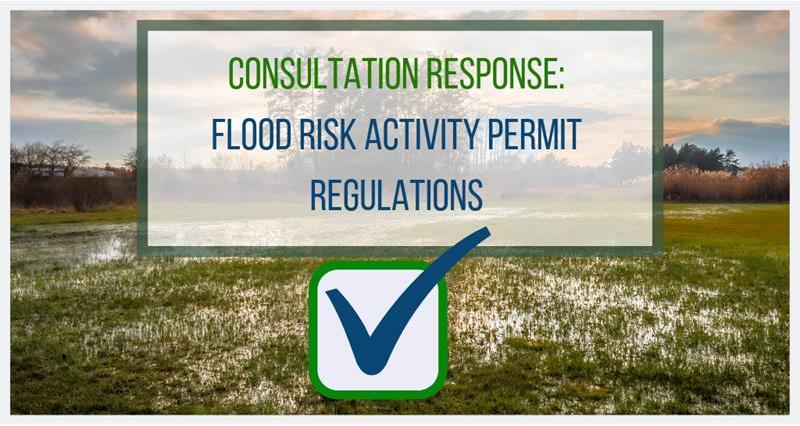 The NFU has recently submitted a consultation response to the Environment Agency’s (EA) amendments to the Flood Risk Activity Standard Rules, part of the EA’s Environmental Permitting Regulations (EPRs).

The EA published the current EPR standard rules for flood risk activities in April 2016. The NFU has provided a response to the first consultation on updating the plans which closed on the 11th January 2019.

The consultation covered the proposed amendments that are intended to simplify the flood risk activity EPR applications. The NFU has been working with the EA to ensure that more permits can be awarded via the standard rules permit route rather than the more costly and lengthy bespoke permit licence.

The NFU’s response on behalf of our members primarily aimed to ensure that the flood risk activity EPR process is more straightforward, transparent and cost-effective.

We have provided detailed comments in our response on each of the amendments. Furthermore, we have included additional comments on potential new standard rules that we believe would be necessary to ensure the wider uptake of the standard rules route.

Within the consultation response we mentioned your main concerns, including:

If the EA agrees to make the amendments to the standard rules and adds the three new Standard Rules to the Flood Risk Activity permit options this will be a major win for the NFU. The amendments include a reduction in the distance that flood risk activities can take place from SSSIs and other protected sites from e.g. from 500 m to 100 m. The proposal of three new Standard Rules cover the use of water gates, mooring piles and the installation of steps, ramps and other similar structures excavated into the existing bank profile, all of which previously required the landowner/manager/farmer to obtain a bespoke permit.

The NFU supports the majority of the changes proposed. However, we do feel that in order to achieve the Environment Agency’s aim of an increased uptake of standard rule permits, further amendments will need to be considered.

Next steps: The EA will make consider the consultation response submitted and make a decision as to which amendments and proposed new Standard Rules they will accept. This is expected to take a few months. The NFU will publish an update on this as soon as the EA has made there decision.

If you have any issues with Flood Risk Activity permits then please get in touch with your local Environment Agency office or call NFU CallFirst on 0370 845 8458.