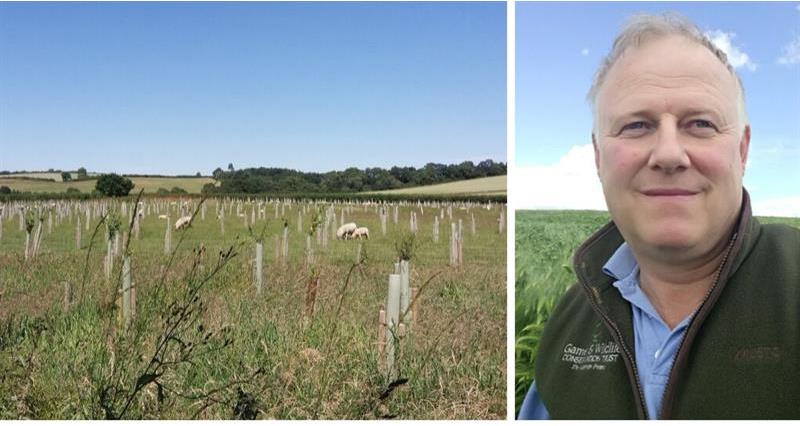 Phil Jarvis is the farm manager at Loddington Estate in Leicestershire, home to the Game and Wildlife Conservation Trust’s Allerton Research and Educational Trust, established in 1992.

The estate is a mixed farm containing 313ha owned and part of a 1,000ha joint venture operation with a neighbour. The owned land is made up of 253ha of arable, 30ha of pasture and 18ha of mature woodland. The arable rotation is wheat, barley, grass, oats, wheat, oilseed rape and beans with the grass leys that are rotationally grazed by sheep to eliminate blackgrass numbers.

The Allerton Project aims to research the effects of variable farming systems on environment and wildlife, educating the public and contributing to more than 250 peer-reviewed papers since 1992. On site there is also an eco-built visitors centre which welcomes 4,000 visitors a year. As the Allerton Project is a working farm, all the research is done at field scale, collaborating with a variety of organisations such as AHDB, Syngenta and Kellogg’s. The farm is Red Tractor assured and participates in the Big Farmland Bird Count and Open Farm Sunday. 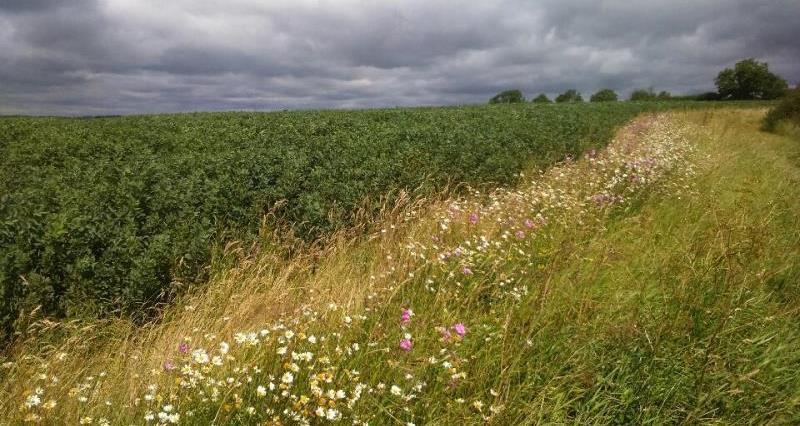 The farm was in a Countryside Stewardship agreement from 2003, before moving into ELS and HLS. A wildflower mix has been planted in several field margins and is a haven for butterflies and bees. The wild bird seed mixture is planted in strips containing kale, quinoa, gold of pleasure, forage radish, barley, triticale and millet. These strips are attractive to finches, reed bunting, yellowhammers and linnets.

Field corners and grass margins are used for nesting cover sites for farmland birds and small mammals. There are permissive footpaths with information boards created to increase public knowledge about the environmental habitats. As a LEAF Innovation farm, integrated farm management (IFM) plays a central role in many farm operations. The inclusion of beetle banks in the centre of some fields, sown with coarse grasses, create a habitat in which crop pest predators such as beetles, spiders and parasitic wasps can thrive. The beetle bank provides a good food source for bird predators such as kestrels and barn owls who hunt small mammals such as harvest mice and voles that live in the banks and grass margins. The beetle banks are good nest sites for the 13 species of bumblebees which are found on farm. 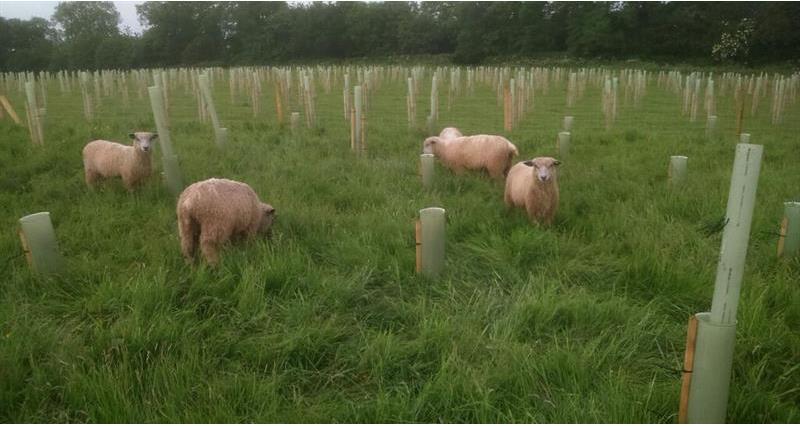 In 2016, the Woodland Trust supplied trees for an agroforestry scheme, to measure the effect of the trees on grass production and soil structure. The field is planted at densities ranging from 50 to 1,100 trees/ha.

The farm’s original woodlands have expanded since the 1990s with the farm planting several hectares of trees which are now over 10 metres tall. They are a mix of native broadleaves and conifer species such as spruce and larch; cherry, silver birch, hazel and oak are planted to help with issues of ash dieback tree disease. The tree plantations are used commercially, for stakes and binders used in hedgelaying and biofuel which heats the headquarters and the eco-built visitors centre. Some wood is stacked up creating a habitat for fungi and insects, including solitary bees. To encourage pollinators there is a heritage apple orchard, the farm encourages dog rose in hedges and pollen and nectar mixtures rich in leguminous species.

The wide rotation is supportive of birds, especially yellowhammers, who move through oilseed rape, then barley, then wheat. Twenty five skylark plots in the fields encourage nesting. The wheat grown on the farm supplies Kellogg's breakfast cereals. Many of the crops are established using reduced cultivations, to lower establishment costs and encourage soil biology to reduce compaction leading to better financial crop margins. Cover crops, temporary grass and herbal leys help with the farm’s blackgrass issues.

The farm is part of the Water Friendly Farming experiment helping to meet targets to improve water quality, aquatic biodiversity and reduce flood risk downstream. Measures include streamside fencing, different livestock watering sites, set aside areas and buffer strips on the sides of  watercourses. Small wetland habitats with areas of exposed mud have also been created in field corners by damming ditches. Large ponds have greater capacity for beneficial aquatic organisms and improve water quality by allowing silts and nutrients to settle in ponds. These strategies have resulting in reducing flood risk in the Eye Brook catchment and increasing the spawning success of brown trout. 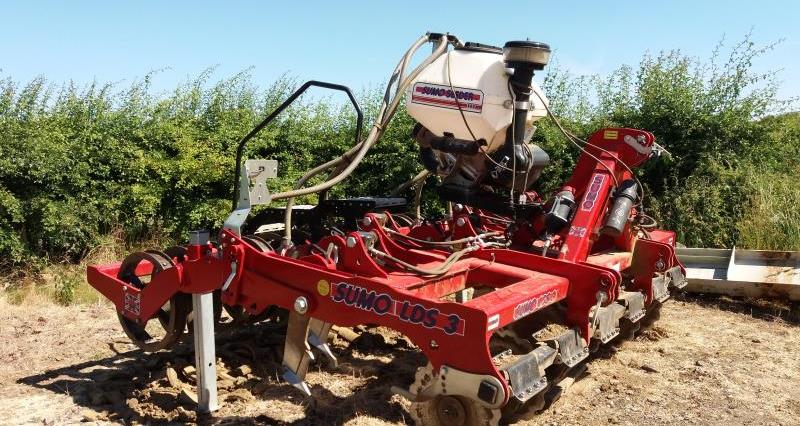 Changes over the past 20 years

A long-term aim of the Allerton Project is returning much of the intensive farmed arable land into a sustainable mixed farming system that maximises financial margins. The previous arable rotation used a limited number of crops, including wheat, OSR and beans. Today the rotation has expanded to include oats, barley and grass to improve on soil health with an agroecological approach. Field margins have also been introduced, initially at a width of 2m and now expanded to 6m. This has allowed the hedge base to become a breeding habitat for whitethroats, partridges and yellowhammers. The trees, hedges and agri-environment habitats have created many wildlife corridors.

Since 1992, the Allerton Project has monitored the game bird management on the estate so as to understand the effects of different farming and management practices on wildlife. The first year was monitored as a baseline year and new management strategies were introduced in 1993. These included enhancing the shrub layer, providing winter bird food, predator control and formation of new habitats.

This resulted in a four-fold increase of wild pheasants (with five shoots a year), doubling songbird abundance, and increased nesting and breeding in Biodiversity Action Plan (BAP) species to 2001. From 2001 to 2010 predator control was removed and in 2006 feeders were removed, resulting in an 80% decrease of autumn wild pheasant numbers, and a 50% decrease in songbirds, as well as impacting hares and BAP species.

In 2011 they re-introduced the previous practices and released raised pheasants, which saw an increase in autumn wild pheasant numbers and a 100% increase in songbird numbers. Today small scale, cocks only, shoots take place, with a focus on grey partridge conservation. 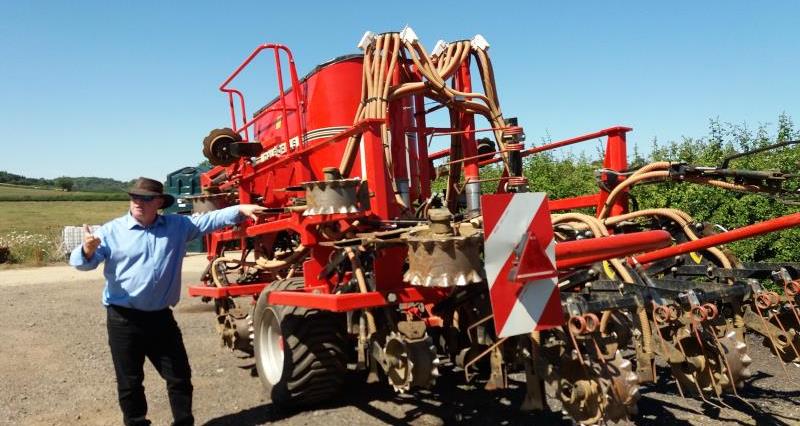 Recent difficult weather conditions have highlighted the challenges farmers face, particularly in soil management; as Phil recalls ‘we had flooding and a heatwave within weeks of each other’. Phil is focused on rejuvenating his soils, aiming to make them more resilient by direct drilling cover crops, improving crop establishment, improving soil structure, earthworms and invertebrates. Ploughing is still used as comparison areas in the research project but the direction of travel is towards less cultivations, wider rotation and more soil cover throughout the year.

In the future Phil hopes to reduce crop inputs, reduce fixed costs associated with machinery and put in place farming systems that reduce CO2 and other greenhouse gas emissions. With the introduction of grass and herbal leys this will move the farm from conservation agriculture to a regenerative approach. He would like to see future environmental schemes ‘streamlined’ for easier entry and reduce bureaucracy for farmers and government agencies. This will help meet the government's aspirations in its 25 Year Environment Plan. Growers will have support with future landscapes which may be their biggest opportunity as, unlike food, you can’t import the natural environment.