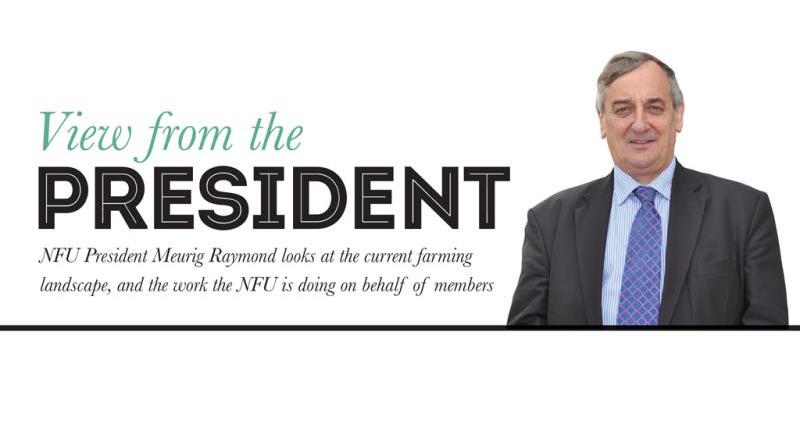 NFU President Meurig Raymond looks at the current farming landscape, and the work the NFU is doing on behalf of members.

the EU. Theresa May’s Government is appealing to the Supreme Court and the Prime Minister insists that Article 50 will be invoked by the end of March.

There is no doubt that the political wheels are turning with a ferocious intensity. But we must not lose sight of our clear goal for British farming – a competitive, profitable and progressive sector that delivers for the nation and beyond on food, jobs, the environment, as well as energy, plant and animal health.

The NFU’s position on essential access to labour, to the single market and future trading relationships beyond the EU, were formalised last month by NFU Council after our 55,000 members were consulted.

Our commodity boards are now working with the NFU’s policy board to define the detail that will form the basis for our negotiations with Defra on the new domestic agricultural policy.

A prosperous countryside for all, one based on farming with food production at its core, must be the ambition as the UK looks to exit the EU. We will be focusing on a strong trade deal for UK farming, horticulture and food sectors, one that does not disadvantage us from our EU competitors, and one that will enable the government of the day to play its part in sustaining a competitive farming industry within the UK.

We have held numerous meetings with the UK farming unions along with other farm organisations, food processors and retailers, seeking to build alliances which will enable us all to deliver a single, strong message on trade and labour.

And we are looking to build meaningful coalitions with partners who share these common goals. Our focus will be fierce as we strive to get the best deal for our members. A prosperous countryside for all, one based on farming with food production at its core, must be the ambition as the UK looks to exit the EU. You can visit our Brexit news pages on NFUonline here.

“A prosperous countryside for all, one based on farming with food production at its core, must be the ambition as the UK looks to exit the EU”

Working with you, the message from NFU members is clear.

Our work must reflect and run in tandem to the machinations of government. That is why we have built a new directorate to shadow the Government’s Brexit department and I am delighted to welcome back to the NFU as director of this department Nick Von Westenholz. We are also making further investment to strengthen our London office to ensure that our lobbying in Westminster reaches the right people with the right power and at the right time. These further measures will enhance the capability of the NFU to better argue the case for a profitable and innovative farming sector for the future.

Beyond Brexit, there is much on my mind, as I am sure there is for many of you. In December it is imperative that farmers receive their farm payments to ease the considerable cash flow pressures that are on the industry at this time. We will continue to hold the RPA to account if it does not deliver on its promise of 90% of farmers to be paid by the end of December.

I must thank and congratulate everyone who has been involved in a highly successful badger cull in the ten areas over the previous few months. Your success acts as a clear example to others in areas where TB remains persistent and high to organise and apply for licences for next year. I remain absolutely convinced that this policy, as part of the Government’s wider TB strategy, is the only way that we are going to eradicate this terrible disease which threatens to destroy so many of our members’ livelihoods.

And with the re-registration for glyphosate only 14 months away, the NFU is developing an economic and environmental impact assessment to make the case for re-licensing. We will be looking to our membership to lobby MPs and MEPs and repeat what you did so brilliantly during the last debate on this issue. Farming without glyphosate has been likened to farming without tractors. We must continue to make our voices heard.

I am delighted to see so many members playing their part in shaping our industry and also promoting the best of British farming to the general public. The NFU again took to the streets of London with a group of young farmers for the Lord Mayor’s Show. In the past two years the NFU has featured live on the BBC’s coverage, putting our industry in a positive spotlight in front of millions of viewers.

Our young farmers did us proud again this year, ensuring those watching heard our calls as to why and how they can back British farming.