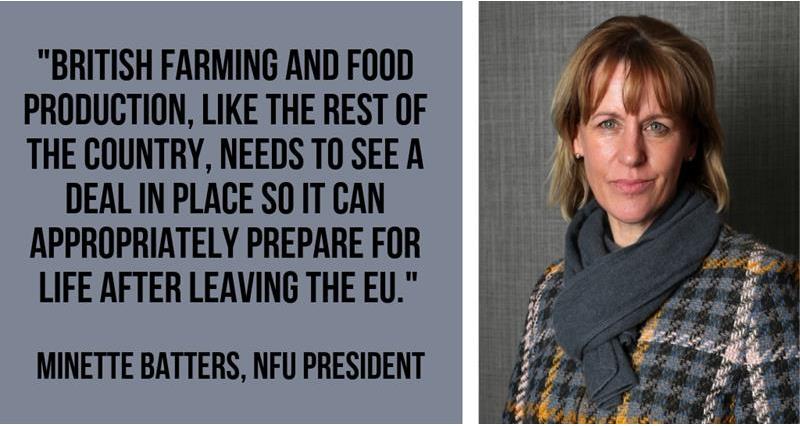 Responding to the votes on various amendments in the House of Commons last night, NFU President Minette Batters said:

“Last night’s vote has done little to provide much-needed certainty for the future of food and farming in Britain, and time is running out.

“With less than two months to go until we leave the EU, we are hugely concerned that a no-deal Brexit is becoming increasingly likely. The NFU has been absolutely clear that this would be catastrophic for food production in Britain.

“Leaving the EU without a deal could well mean a trade embargo is imposed on animals and animal products going to the EU which, along with punitive tariffs on all goods going into the EU, would severely restrict livestock farmers’ export markets.

"Meanwhile, the potential for government to unilaterally lower import tariffs on food could lead to British farmers being undercut by food coming into the country which may have been produced to lower standards than is legally required of UK farmers.

“Although it is encouraging that the majority of MPs opposed a no-deal scenario in the votes last night, no-deal cannot simply be wished away. An agreement negotiated between the EU and UK, and accepted by Parliament, must be reached urgently to protect the country’s ability to produce its own food and feed its people.

“The NFU will be assessing any deal against our six key principles agreed at an extraordinary meeting of the NFU’s Council in December, which includes avoiding a no-deal and ensuring free and frictionless trade with our biggest trading partner.

“We are getting to crunch point now. British farming and food production, like the rest of the country, needs to see a deal in place so it can appropriately prepare for life after leaving the EU.”

'A no deal would be absolutely savage for us, I cannot imagine how bad it will look' - National Farmers' Union president @Minette_Batters says she has had no written assurances from the government over their plans post-Brexit.
#Ridge
For more, head here: https://t.co/y0ZoN9dk4C pic.twitter.com/VoLFOT5zQw

Above: NFU President Minette Batters appeared live on the Sky News Sophy Ridge on Sunday programme yesterday talking about how a no-deal Brexit would impact farming. Minette said it would be catastrophic for the industry and that she has had no written assurances from the government over their plans post-Brexit.