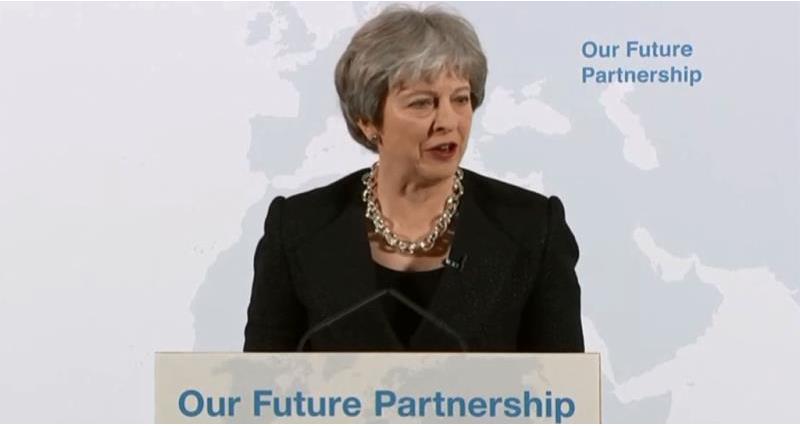 Following her Lancaster House and Florence speeches, the Prime Minister has just added an extra piece to the jigsaw of the UK government stance on Brexit. This time it is primarily focused on the future economic partnership between the UK and the EU.

First of all, the PM introduced the concept of “five tests” for the negotiated deal to be acceptable:

The PM reassured that the negotiators are making real progress and are close to an agreement on the implementation period.

She then moved on to the economic partnership between the UK and the EU, recognising that there are challenges for the border in Ireland but reiterated that the UK government does not want to go back to a hard border with checks. However, she insisted that the recent EU proposal of keeping Northern Ireland in the Customs Union is not acceptable and damages the integrity of our Union.

She also confirmed that none of the existing trade models (e.g. CETA, European Economic Area) satisfy the above mentioned five tests: the UK will leave the Single Market and the ECJ jurisdiction but wants to establish a relationship with the EU broader and deeper than any existing free trade agreements. As she put it: “this is a negotiation, nobody gets exactly what they want”.

The foundations of a new relationship

With regards to the trade relationship between the UK and the EU, the PM outlined five foundations:

1.    Reciprocal binding commitments to ensure fair competition across the border
2.    An independent arbitration mechanism
3.    On-going dialogue and consultation amongst regulators to ensure stability
4.    Special arrangements for data protection
5.    Maintain links amongst our people, stressing that the free movement of people will end as we leave the EU

In response to some of the criticism from the continent, the PM stressed that the UK’s attitude is not about cherry-picking since every trade agreement grants different levels of market access.

Probably for the first time, she then outlined the UK’s plan as to how to achieve its vision. In terms of trade in goods, the PM reiterated that the UK wants to ensure trade as frictionless as possible, without tariffs or quotas, with a comprehensive system of mutual recognition that guarantees that UK and EU standards will remain at the same level, despite the fact that the UK rules might not be identical to the EU rules but reach the same outcome.

The PM explained that she would like the UK to remain member of some EU agencies (i.e. on medicines, chemicals and aviation) to ensure that only one series of approvals in one country is needed.

As to customs, she referred to the two options that the government previously put forward in its Customs White Paper as possible solutions to keep the EU-UK border frictionless, whilst the UK will leave the EU’s Customs Union and commercial policy. She recognised that the proposed ideas will depend on technology developments but stressed that the options are “serious”.

Special mention for the agri-food and drinks sector

The agri-food sector was specifically mentioned as an area where the government wants to secure flexibility to make the most of the opportunities arising from Brexit. She touched upon the government’s ambition to further protect the environment and reform the agricultural policy as we move away from the CAP.