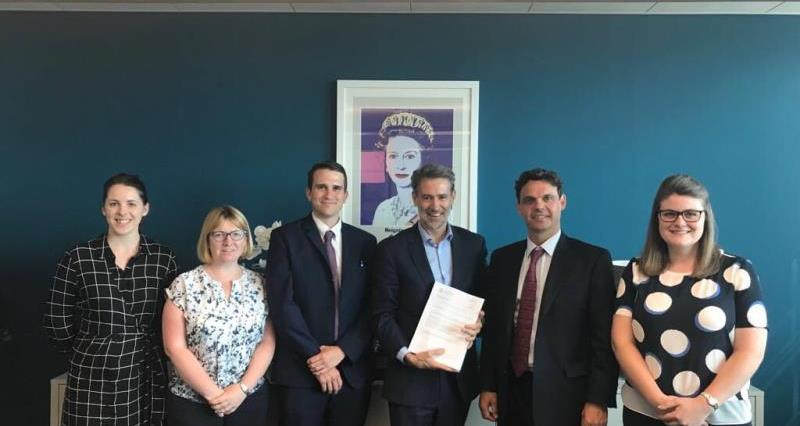 Members of the NFU’s Brexit and BAB teams were in Geneva earlier this week to discuss progress towards the UK re-establishing itself as an independent member of the WTO. Whilst the UK is in fact presently one of the WTO’s 164 members, it does not operate independently of the EU. Once we leave the EU, we will once again take up our own seat at the WTO table. This week’s visit to Geneva was highly relevant to the NFU and its members and was very timely as the UK took a big step forward in the re-establishment process.

The NFU team met with a number of key players whilst in Geneva, including representatives of the WTO secretariat, as well as attachés of the US, Japanese, Australian, New Zealand and Irish governments and political commentators based in Geneva. The NFU team was also able to discuss first-hand Her Majesty’s Government’s priorities with the UK Ambassador to the WTO, Julian Braithwaite and his expert team.

Preparing for independent membership of the WTO

A huge part of the UK preparing to take up its seat at the WTO is the establishment of the UK’s schedules of concession. This sets out the baseline for which the UK will operate its multi-lateral trade policy post Brexit and is the starting point for the many bilateral trade deals the UK government is considering for the future, including the free trade deal which it hopes to secure with the EU. The UK has this week circulated its draft schedule of concessions for trade in goods. Given the NFU were right there at the heart of the action, it was especially useful to be able to discuss the details of this significant development with the UK Ambassador.

What is a schedule of concessions?

Every member of the WTO has a schedule of concessions for trade in goods. A schedule typically runs to hundreds of pages and covers every form of goods that are traded. You name it -  mobile phones, precious metals, clothes, sports equipment, textiles. If it’s available on the market it will have a 6 or 8 digit customs code to identify it and a “bound rate of duty” which sets the maximum rate of duty that can be applied at the border to imports of that specific good. Of the 719 pages that the UK’s draft schedule runs to, the NFU is most interested in the first 142 pages that sets out the way in which the UK will treat imported agricultural products.  Typically a country’s schedule sets out a number of elements directly relevant to farmers. These are;

What’s significant about a schedule of concessions?

The only way the UK can deviate from applying the maximum duties set out in its WTO schedule or offer any other concessions than those set out at the WTO, is if the UK is part of a customs union, or if there is a Regional Trade Agreement in place. This matters because if the UK fails to negotiate a future relationship with the EU that comprises one or other of those approaches, the UK would be prohibited from offering the EU any special treatment that wasn’t also offered to every member of the WTO. This is an approach known as the “Most Favoured Nation” (MFN) rule. It’s important to bear in mind that the WTO schedule of concessions relates to trade out-with a bilateral trade deal. The UK is also seeking to continue to operate the concessions granted and benefits arising from the 40 bilateral trade agreements that the EU has negotiated with around 55 countries around the world.

What’s in the UK’s schedule?

In establishing its own schedule, the UK has sought to “replicate” as far as possible the EU’s schedule. In short it has cut and pasted the vast majority of the EU’s schedule including the bound tariff levels and the products that can benefit from Special Safeguards, as well as the methodology for implementing those safeguards.   The UK has made no political decisions or policy changes on whether the EU’s approach to trade policy is too liberal or too protectionist. Nor has it sought to change the currency of the tariffs it charges from euros to sterling. It has simply sought to replicate what the EU does in an attempt to minimise any trade disruption as a result of Brexit.  There are two aspects where it has not been possible to simply cut and paste the EU schedule into the UK’s. These are with respect the TRQs and the AMS.  This is because the UK currently has a share of the EU28’s concessions and when it leaves the EU, the UK and the EU27 will have to carve out respective ceilings and volumes for their own markets. Once again the UK has sought to make no political decision on whether the EU’s concessions are correct, but has simply taken a mathematical approach to determining where the split should be and hence what the UK’s schedule will be.

How are the EU and UK planning to split the TRQs?

The TRQs are typically lower or zero duty for a fixed amount of product. So for example the EU offers New Zealand access to its market for over 220,000t of sheepmeat at zero duty. Above that quantity, New Zealand exporters would have to pay the Most Favoured Nation (MFN) duty which varies depending on the cut of meat, but is around 12.8% of the value plus a fixed amount of €171/100kg of product. In determining how much quota the UK would make available in the future, the EU and UK have agreed a joint methodology. In short, they have looked at how much product came into the EU28 during the years 2013,14 and 15 and how much of that amount came to the UK. This is expressed as a percentage of use and that same percentage is then applied against the total volume available from the EU. For example, if during 2013,2014 and 2015 the UK imported around half of the total amount of lamb exported to the EU by New Zealand under the quota, then the UK is taking half of the total quota available previously and ensuring that New Zealand continues to have that market access in the future.

How to split the AMS ceiling?

The UK and EU have again sought a mathematical solution to the issue of splitting the EU’s ceiling for limiting “trade distorting” subsidies. This is a good example of where the UK has sought to make no political pre-judgements on the future approach it will take. No-one expects the UK to start to make “trade distorting” subsidies in the future when it leaves the auspices of the Common Agricultural Policy (CAP), but when the EU and UK do “divorce” the UK will simply take back what it contributed to the EU’s AMS allowance when this was established back in 1986-1988. Back then, UK farmers were able to benefit from price support aids that amounted to around €5.9billion. The EU’s ceiling of €72billion will therefore be reduced by that amount and the UK would have a theoretical ceiling of €5.9billion.

In addition to the commitments on AMS, the United Kingdom is also undertaking to take its share of an agreement reached between the EU and the US known as the “1992 Blairhouse Agreement”  thereby limiting the amount of aid that could in theory be paid to support UK production of oilseeds. The maximum oilseed base area for the United Kingdom would therefore be 385,000 hectares. Given successive CAP reforms and the introduction of decoupled support, this limitation is no longer relevant under the current EU support regime. Indeed the current area planted for oilseeds in UK in 2017 was 590,000ha.

The UK’s draft schedule has now been circulated to all the members of the WTO. The legal approach the UK is taking to establishing its schedule is known as the “technical rectification” procedure. Other members of the WTO now have 3 months in which to make objections to the UK’s approach. It is highly likely that objections will be made, and countries including Argentina, Brazil, Canada, New Zealand, Uruguay, Thailand and USA have already written a letter to the UK’s Ambassador, Julian Braithwaite, expressing concerns about the proposed approach. Now that the formal process has started, it’s likely those countries and potentially many more will lodge objections against the UK’s schedule in the next 3 months.

What happens if countries object?

It will be for the objecting country to demonstrate damage to their trade as a result of the approach taken by the UK. If this can be shown, it is possible that the UK will have to undertake what is known as an Article 28 modification negotiation. Under this procedure the UK would be required to consult with a small number of countries that are considered to have “initial negotiating rights” (INRs) and with members having “principal supplying interest” (PSI). INRs and PSI Members together with the Member seeking to renegotiate a concession enter into consultation with any other Member having a “substantial interest” on the concession. In some cases the consultations would lead to a situation where the UK had to compensate those countries that can demonstrate damage. Compensation could take the form of further market access concessions for that product or any other good set out in the schedule.

The UK’s AMS allocation has to date generated less controversy, but it is likely that some of the members who have little or no scope to make “trade distorting” subsidies will object to the UK being allocated this concession. The issue of allocating AMS cannot be dealt with through an Article 28 negotiation and therefore if there are objections, the UK may need to find a way of appeasing any concerns expressed. The UK is confident that it will conclude the process of certifying its schedules by 31st December 2020.

What happens if there is no agreement?

It is worth noting that many countries have continued to trade using uncertified schedules for many years whilst negotiations at the WTO continue. Whilst it would be politically unattractive for the UK to find itself in this position at the end of the planned EU / UK implementation period at the end of 2020, if the UK’s schedule remains uncertified by the WTO this in itself will not create any “cliff edges” for the UK or its traders – it will simply trade on the terms of its draft schedule.

The NFU has built strong relationships and understanding of the issues facing the UK as it seeks to re-establish itself at the WTO. We will maintain close contact with the government representatives in Geneva and in London in the months and years ahead to ensure that any further concessions that may potentially be offered don’t damage UK domestic producers.