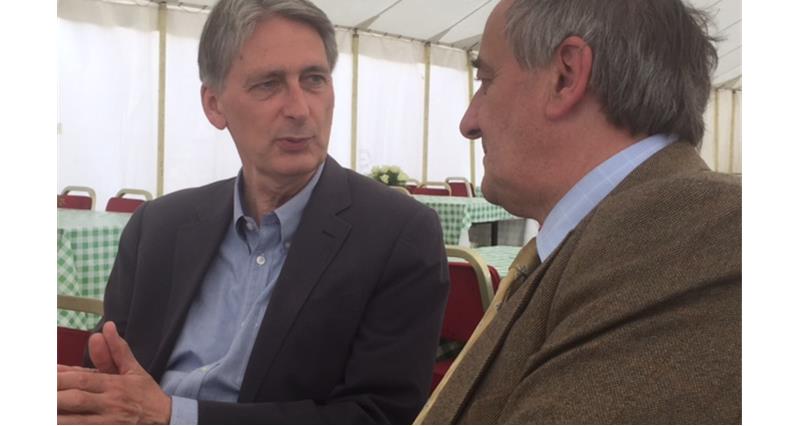 Pictured left to right: The Chancellor of the Exchequer, Philip Hammond MP, met with NFU President, Meurig Raymond, at a meeting hosted by the President of the Chertsey Agricultural Show at the weekend.

The NFU says farmers have been given much-needed certainty in the short term after the Treasury’s decision to guarantee agricultural spending though to 2020.

This should mean that farmers can count on receiving the Basic Payment Scheme through to 2020 and that agri-environment schemes already in place are guaranteed through to their conclusion. The NFU is working with Defra to understand the position of those farmers applying for Countryside Stewardship this September. The NFU said it’s good to hear that other rural development grants such as Leader offered before the Autumn Statement will also be honoured.

NFU President Meurig Raymond said he is extremely pleased to hear the news officially after the NFU’s discussions with Secretary of State Andrea Leadsom, her department and the Treasury in the past three weeks. Mr Raymond said this certainty in the short term now allows time for the industry and Defra to formulate a domestic agricultural policy that is fit for purpose.

Mr Raymond said: “The Treasury’s announcement today is positive for farmers.  I hope that this short-term certainty will help to deliver longer-term confidence and this is exactly what farm businesses need now.

“We’ve been emphasising to the Government at all levels that the success of the UK’s largest manufacturing sector - food and drink–worth £108 billion to the UK economy, is underpinned by the farming sector. With the agricultural budget now retained and agri-environment agreements and BPS payments now honoured, I am delighted that the Prime Minister and Defra have understood the importance of farming and food production.”