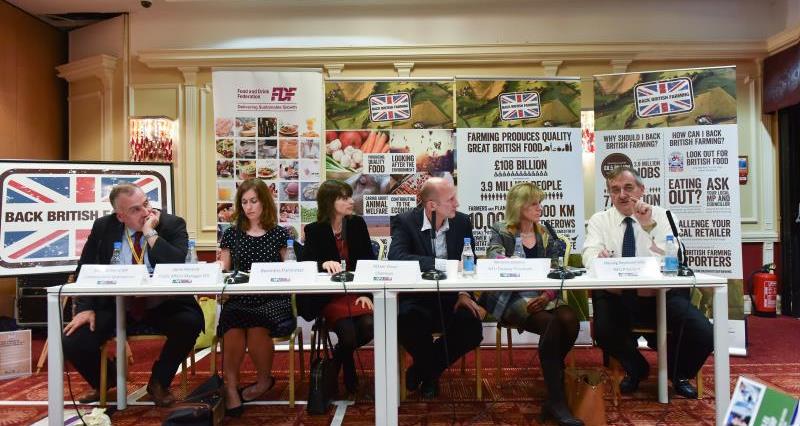 The importance of food and farming was impressed upon key Liberal Democrats in the first of the NFU’s fringe events in Brighton last night.

In his opening remarks, NFU President Meurig Raymond thanked Liberal Democrat leader Tim Farron for standing up against the idea the country can just import cheap food with lower standards. Mr Raymond said that, if anything, the UK vote to leave the European Union was a vote to support Britain.

Over 115 people attended the event, held at the Hilton Metropole, where the NFU and its farmer and grower members were able to quiz Baroness Parminter, Food and Rural Affairs spokesperson for the party, and Mark Williams MP, Commons Defra spokesperson, and promote the importance of British food and farming. Farmers and growers will also have the chance to quiz MPs at NFU fringe events at the Labour (26 Sept) and Conservative (3 Oct) party conferences.

“We’ve made it clear that food and drink, the largest manufacturing industry in the UK and worth £108 billion to the nation, is one that no political party can take for granted and it was good to hear that the Lib Dems recognise the importance of the rural economy,” said Mr Raymond. “Farming, which is at the heart of that sector’s supply chain, needs a dynamic, profitable and productive future to enable British food and farming to thrive.

“We have a growing number of mouths to feed - 77 million by 2050 – and this is a big challenge for the people who produce food. We need to ensure that our Government can support this fantastic industry with the right policies to ensure we’re able to feed the nation and play a part in feeding the world.

“The decision to leave the EU will impact on every UK citizen. But for farmers, the decision will inevitably mean changes to our businesses – some of them potentially quite substantial as we look at where and how we trade.

“We now have the opportunity to take learnings from the Common Agricultural Policy to produce a tailor-made domestic farming policy, one built on a cross-party consensus to support a new, invigorated domestic agricultural policy which can match the scale of vision not seen since the post-war years.

“Baroness Parminter, Mark Williams and their party leader Tim Farron, have taken time to pledge their support to Back British Farming since the vote for the UK to leave the EU. I’m confident that, with this political attitude, home-grown food in this country has a positive future.”

Mr Raymond also urged Government to support the good work farmers do in delivering for the environment: “When farming is profitable farmers will invest into infrastructure and in improving their environmental standards. Every farmer wants to leave the countryside with a better environmental footprint for the next generation.”

This fringe event comes just days after over 100 MPs signed a pledge on Back British Farming Day in Westminster. Read the pledge and see photos from the day here.