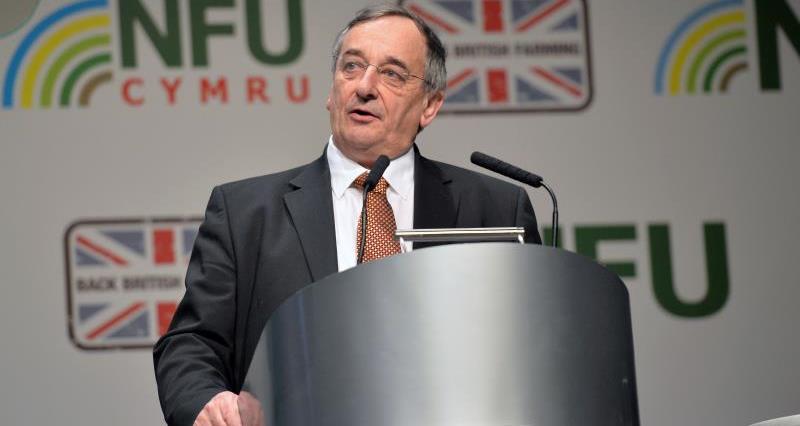 The NFU President has called on Secretary of State Andrea Leadsom to clarify government commitments to  one of the most affected sectors post-Brexit – farming.

In his opening speech at NFU Conference, Meurig Raymond highlighted three areas government needs to take action on if Brexit is to be successful for the country’s food and farming industry: the right trade deals, access to a competent and reliable workforce and a domestic agricultural policy that works for the country.

British farmers produce the raw ingredients for the UK’s largest manufacturing sector, food and drink, worth £108 billion. Farming provides jobs for 3.9 million people, and has the potential to deliver much more for the country.  The NFU says the industry now needs certainty and firm commitments from government if the country is to feel the benefits of a thriving food and farming industry.

Mr Raymond said: “Over the next two years negotiations will take place which will have a massive impact on farming and Britain’s ability to have a thriving food production system. Brexit needs to be successful when we leave the EU.

“We need government to now build on the strong foundations laid down in July so that it is clear how and why the industry will be better off. NFU members want to deliver on a vision shared with government for an increasingly profitable, competitive and sustainable food and farming sector. Britain has a right to expect improved food security and enduring economic growth. Put simply farming contributes to the health and wealth of the British people.

“We have been clear on what we think are the main ingredients for success.  It is a fairly simple recipe, with three main ingredients. Firstly unrestricted access to the European market, secondly continued access to a competent and reliable workforce both pre and post farm-gate and thirdly a new agricultural policy which assists in the development of an increasingly productive, progressive and above all profitable farming sector.

“We will need the government’s support in all of these areas. Starting with keeping important trade routes open to ensure a smooth transition to new trading relationships with Europe post-Brexit with the best possible access to markets all over the world.

“Farming is reliant on being able to recruit both a permanent and seasonal workforce and we have a very serious challenge right now. The horticulture and poultry sectors – which are reliant on seasonal temporary workers - are already struggling to recruit up to 95,000 needed by 2021. We urge the cabinet to work with us to sort this out as a matter of urgency. British food production depends it.  In fact, the whole food chain depends on it.”