Defra Secretary of State Michael Gove, announced a ‘thorough and comprehensive ‘review into the barrage of inspections, which he said were a burden on agriculture without producing any environmental benefit.

Mr Gove told the 2018 conference that the Government wanted to see where inspections could be simplified, reduced or eliminated, whilst offering consumers guarantees about animal welfare and plant health standards.

The ‘long overdue’ review will be led by former Animal Health chief executive, Dame Glenys Stacey, and more details will emerge when the Government publishes its Command Paper shortly.

Mr Raymond told the Defra Secretary that the nation needs a good Brexit - one which means British farming and food production builds on the £112 billion it already contributes to the economy and supporting jobs for almost 4 million people, has access to a competent and reliable workforce to harvest our fresh produce and sees Britain’s self-sufficiency in food increase rather than decrease. 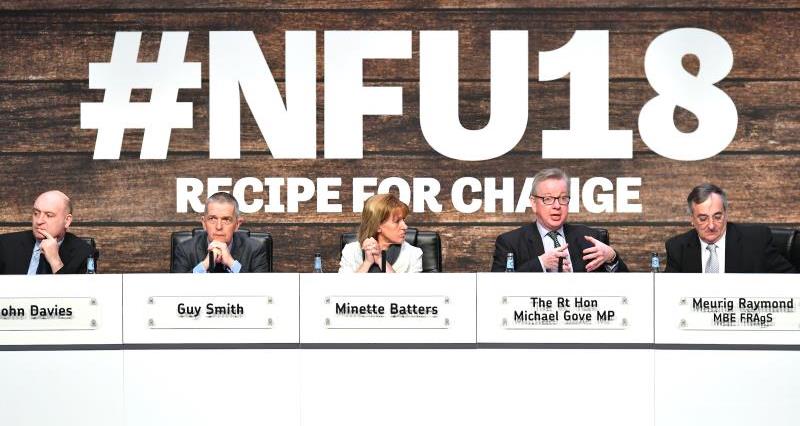 Mr Gove told the 1,500 delegates that the hopes, concerns and duties of the agricultural community are more relevant to Government now than they have been for 50 years.

He explained that, in the past, Defra had been low on the Whitehall pecking order because so many agricultural policies were decided by Europe. Now Brexit gives it the opportunity to shape these policies domestically, and he attributed the growth of the food and drink industry to the opportunities leaving the EU offered in the form of exports.

“So we can now have, for the very first time in Government, a strategy that is designed to integrate the concerns of all those involved in food and drink production - from farm to fork - to develop the right policies for the future,” said Mr Gove.”

“Indeed strengthening the food and drink sector is integral to the broader economic policy direction the Prime Minister has outlined for the whole Government.”

He assured farmers that the UK would not be signing trade deals that meant that UK producers were undercut on environmental or animal welfare standards.

Commenting on the amount of public money spent on infrastructure projects such as HS2 compared to rural high speed broadband, Mr Gove said it was ridiculous you can get better broadband in Kenya rather than Kent in the country that pioneered the World Wide Web.

Mr Gove also pledged to improve Government procurement to increase the amount of British produce used by the state, in order to support British food producers. “Changing how Government procures food can help drive the change we all want to see - we can use public money to reward those farmers and food producers who grow healthy food in a sustainable fashion, we can invest in local food economies and we can support higher environmental standards overall,” Mr Gove said.

Mr Gove acknowledged the industry’s dependence upon highly skilled labour, but said that recovering domestic economies meant that fewer people were seeking jobs in the UK, so farmers and growers would have to be more creative to attract staff. Delegates were keen to hear news on a possible future seasonal workers scheme, but Mr Gove said this was under the remit of the Home Office. 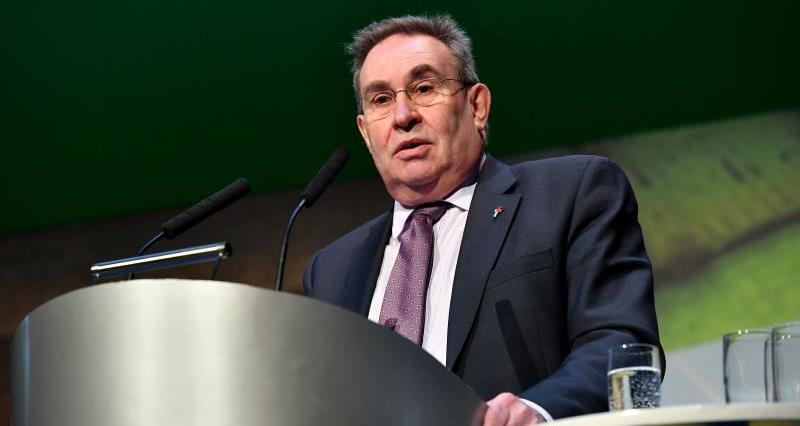 He highlighted the challenge of reorganising British agriculture to ensure that it was 'not an afterthought but central to Brexit negotiations.'

Mr Drew said: "Farming is a key component of the British economy, providing 475,000 jobs and driving growth in rural communities across the country. It also provides 61% of our food, while farmers act as custodians for our environment, managing more than 70% of the UK landscape.

"40% of the EU’s entire budget is related to agriculture and rural development. About 80% of our agricultural exports go to the European Union and 94% of farming imports and 97% of exports are with countries with which the EU has negotiated a free-trade agreement.

"We need trade agreements that work for British farming, while protecting the high standards of food safety and animal welfare that consumers expect – frictionless, tariff-free trade and new markets that exploit this proud record of production standards.

"Food and farming should be a strategic priority for Government, a cornerstone in a broad industrial strategy. There remains a clear need for a food and farming plan to grow more, buy more and sell more British food. Our food chain must be made more resilient.

"Labour is developing a strategy that not only includes food but its importance to the rural economy and its relationship to health, welfare and fitness. We will not allow the Treasury to make a dramatic cut in Farm Support Payments and will see off any attempt to do so.

"We will also look at public procurement with the intention that British food will be expected to be served in all public-sector establishments – hospitals and schools, for example.

"We will oppose any trade deal which does not keep the same animal welfare standards."