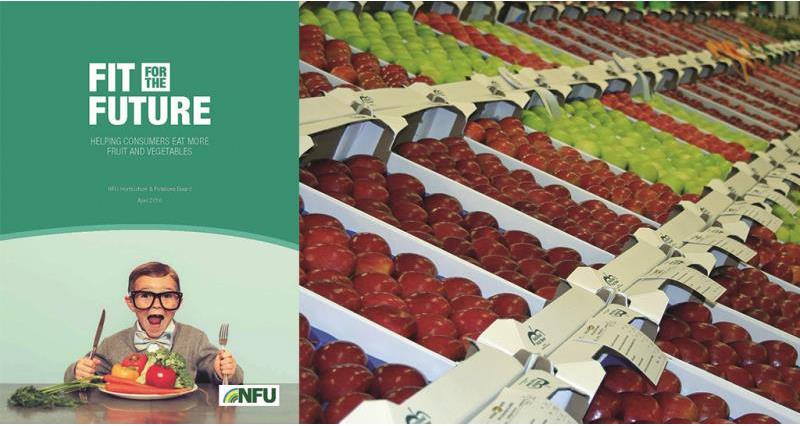 Tesco’s ‘Free Fruit for Kids’ scheme shows the benefits of promoting fruit and vegetables in supermarkets, a position laid out in the NFU’s Fit for the Future report.

The scheme, launched last summer, has given out over 20 million pieces of free fruit to children across the country, including over six and a half million apples.

The NFU’s Fit for the Future report urged retailers to make fruit and veg an intrinsic part of the modern supermarket by putting fresh produce in front of the public in multiple areas of the store, helping make fruit and vegetables an important part of their regular shop.

NFU horticulture and potatoes board chair Ali Capper said: “Anything we can do to increase the consumption of fruit and veg in today’s society, particularly amongst children, is welcome and Tesco’s scheme of giving out free fruit to children is a good example.

“The NFU’s Fit for the Future report encourages supermarkets to increase the proportion of fruit and veg snacks available, as well as increasing the number of areas in store where produce is available to pick up. With many parents saying their children eat more fruit as a result of this scheme, offering free fruit at the front of the store really does show that these suggestions can work.

“The NFU would now like to see Tesco include vegetable snacks in their scheme and to include as much British produce as possible. There is plenty of fresh, delicious British fruit available all year round that can be used to promote the values of domestic produce and the benefits of eating seasonally.”

Sainsbury’s has also increased its use of fruit by doubling its range of frozen fruit with the launch of fruit and vegetable smoothie mixes and five new frozen fruit packs, including whole strawberries and blackberries.

The NFU Potato Forum has reappointed its Chairman and Vice-Chairman. Find out more here.

What as the NFU horticulture and potatoes team been getting up to? Find out in their activity update.