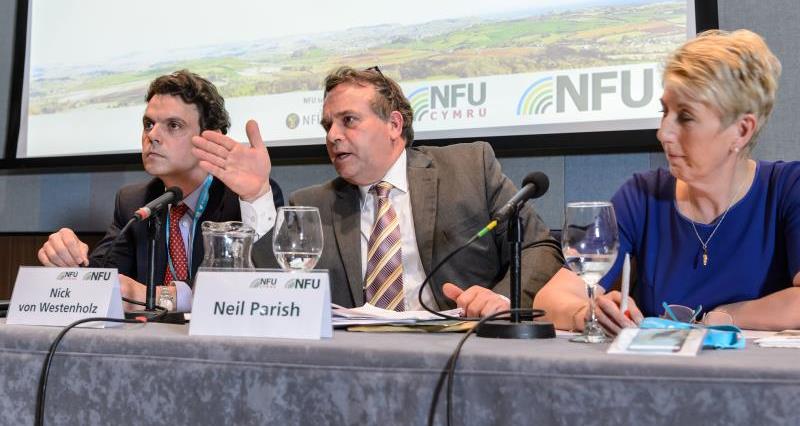 The NFU has welcomed many of the recommendations and findings of the EFRA Committee’s latest inquiry Brexit: Trade in Food.

The report, launched on 18 February, accurately identifies the scale of the unprecedented challenges Britain’s food supply chain and consumers could face from a poor Brexit outcome.

EFRA Committee chairman Neil Parish, MP, will discuss the report in detail during a dedicated session at NFU Conference 2018 on Tuesday afternoon (20 February).

NFU chief EU exit and international affairs adviser Gail Soutar said: “The EU is the UK’s most significant trading partner and is likely to remain so for many years to come. Yet the Committee has rightly recognised that the government cannot guarantee a free trade deal will be reached with the EU. The government must stop entering into these negotiations focused on “red lines” and instead engage in constructive talks that aim to conclude the best possible outcome for British jobs and growth.

“The NFU fully endorses the Committee’s findings that there would be significant impact on Britain’s farmers and domestic food supply chain if the UK Government pursued an approach of unilaterally reducing tariffs. The Committee is clear that the effect would 'put many UK farmers out of business and render the UK dependent on imported food' and that 'liberalisation of barriers could possibly lead to cheaper imports, produced to lower welfare standards, and damage British producers'. Such an outcome would be bad news for British farmers and for British consumers.

“The NFU looks forward to hearing the response from the government and in seeing the detail of the forthcoming Command Paper which will shape the Agriculture Bill. It is essential that government action is underpinned by a strong evidence base and therefore the Committee’s calls for a sector by sector impact assessment is much welcomed.”

Mr Parish called for the government to analyse each farm sector's needs and consider funding to enable farmers to adapt to changing trading conditions.

He said: “60% of the UK’s agricultural exports and 70% of its imports are from the EU. In order to safeguard the livelihoods of UK farmers and guarantee domestic food security post-Brexit, it is vital that the government articulates its vision for protecting both. The first step in this process is creating an analysis of each farming sector before bringing the Agriculture Bill before Parliament.

“UK agriculture will need to adapt to the changed trading circumstances following Brexit, so the Government should consider putting funding in place to enable farmers to do so.

“It is crucial that the Government takes positive political action towards new trading relationships as a matter of priority.

“We should under no circumstances compromise on our world-renowned animal welfare, environmental, and food standards. Brexit should be an opportunity to improve, not undermine, our global reputation for quality.”