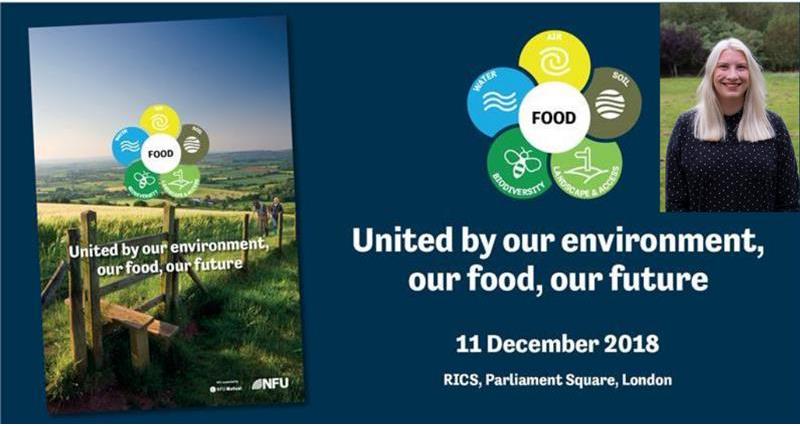 NFU graduate trainee Hannah Binns reflects on the key messages from the NFU's recent conference launching its 'United by our environment, our food, our future’ report.

On Tuesday 11 December our inaugural ‘United by our environment, our food, our future’ conference brought together NGOs, retailers, government officials and water companies to discuss the key areas of progress made and the future challenges facing the farmed environment.

More than 130 delegates attended the event, including Defra Minister George Eustice, and it was great to see such stimulating discussions about the vital role farmers play in protecting and enhancing the environment while producing safe, affordable food for the nation.

Read more about the conference and the report

Key messages from the morning

After an opening address from NFU President Minette Batters launching the NFU's United by our environment, our food, our future report, there was a lively panel discussion with industry stakeholders.

The first panellist,NFU Environment Forum member Richard Bramley, began by discussing how agriculture can provide solutions when it comes to climate change and other environmental challenges.

Judith Batchelar, director of brand at Sainsbury’s, noted the importance of examining the nutritional qualities of the calories we consume, calling for a better dialogue around what we eat, and highlighted the complexity of explaining environmental parameters to consumers.

Shaun Spiers, chair of Greener UK, explored the environmental importance of not undermining standards in future trade deals before echoing Mr Davies' sentiments for a collaborative partnership between environmentalists and farmers to shape future agriculture policy.

Finally, Teresa Dent, GWCT chief executive, illustrated the work of GWCT in providing evidence and guidance for farmers to improve nature on their productive farms, through the farmer cluster concept.

The diverse roles of the speakers meant both the questions and answers were varied but the morning session emphasised the need for a united approach between farmers and environmentalists to shape future agriculture policy.

Following the session, Defra Minister George Eustice welcomed the NFU’s timely report on the environment, before highlighting the need for environmental payments to be ‘more generous’ and reward sustainable farming practices, as well as a move towards a more environmentally sustainable, less pesticide dependent future. 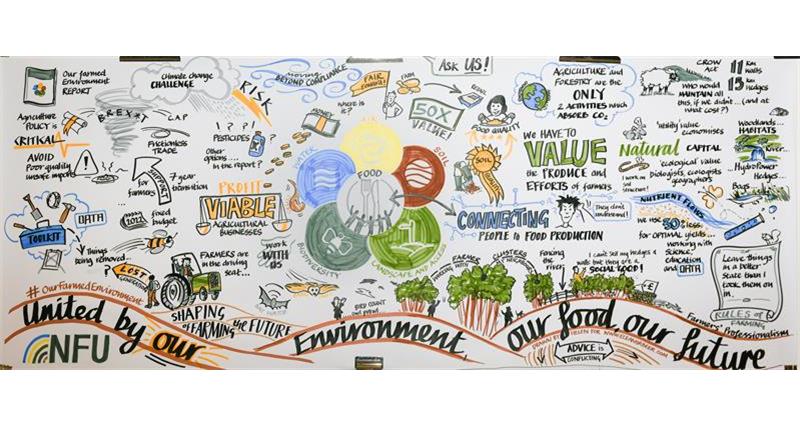 Key messages from the afternoon

After lunch, NFU Environment Forum chairman Mark Pope chaired the farmer case study session, which gave farmers an opportunity to showcase how they are maintaining and enhancing their environment.

Landscape and access case study, Thomas Binns, a livestock farmer from the North West, spoke about his upkeep of 11km of stone walls, 15km of hedgerows and 11km of open access footpaths for the one million people within 30 minutes of his farm over the years, while producing British lamb and breeding stock for British consumers and businesses. He highlighted the importance of balancing the production of food alongside environmental maintenance and reinforced the unwritten rule among farmers to leave the countryside in a better condition for future generations to farm and enjoy. See the video case study from Thomas here.

Biodiversity case study, Alex Higgs, a livestock farmer from Wales, discussed the various measures she has taken over the years to improve the biodiversity on her farm, such as planting small woods, fencing off water courses and only allowing cattle to graze the upland bog in the summer months to keep the bog moist. She also noted how out of touch consumers are with the provenance of their food and the need for education in schools to bridge this disconnect. See the video case study from Alex here.

Poul Hoveson, an arable farm manager from East Anglia, focused on the importance of managing soil through crop rotation and cultivations to produce healthy food. He talked about the importance of education and his close work with universities, before highlighting the importance of using science to enlighten farming practices. See the video case study from Poul here.

Speaking on behalf of the Clun Valley farmers, Carol Griffiths, a mixed farmer from the West Midlands, explored their continued efforts to improve the water quality and subsequently encourage the freshwater pearl mussel to breed, despite receiving varied advice for various organisations. She also emphasised the important dual role British farmers play in delivering high quality environment alongside having viable agricultural businesses. See the video case study from the Clun Valley farmers here.

NFU President Minette Batters summarised the discussion, stating that this is the start of a new and positive conversation about the farmed environment, one which acknowledges the challenges ahead but recognises that farmers are part of the solution.