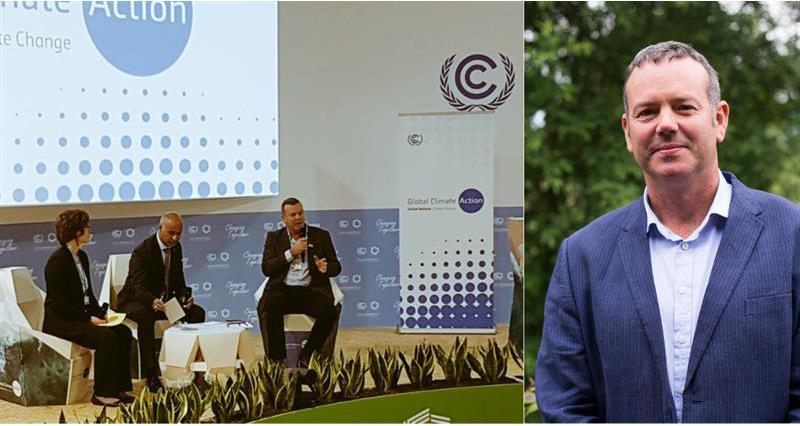 Above: NFU Environment Forum member Richard Bramley takes part in a debate on stage at COP24 in Poland

There were many times during my visit to COP24 in Poland when I’ve been the only one to put my hand up in answer to the question: ‘are there any farmers in the room?’.

Lots of people talking about agriculture, what farmers should/could be doing, about changing consumption patterns (because the calls to eat less meat and dairy are as loud here as at home) and yet so few farmers. So it was good to have the opportunity to offer a real perspective from the farm to these proceedings, to help people understand the practicalities of farming, explaining how my own farm has been affected by severe weather like this year’s drought and what farmers really need.

I got the opportunity to speak to government representatives negotiating the Koronivia Joint Work on Agriculture, and I stressed the need for financial mechanisms like the Green Climate Fund to better support agriculture.

If governments want things to work, then they have to speak to farmers right from the start.  I took part in a debate about our food system in the ‘Climate Action Hub’.

It was heartening to see that farmers organisations worldwide have organised themselves as a ‘Farmers' Constituency’, giving farmers their own voice at these international negotiations.

And it was reassuring, especially in the domestic political climate we find ourselves in, that the NFU is at the centre of all the Farmers' Constituency work.

Has it ever been as important for us to start establishing a British voice at such events, especially as I wasn’t aware of anyone from the UK government involved in the agricultural negotiations?

Brexit is a huge challenge for us, but the sector most affected by climate change is farming (it’s happening right now). If we lose a support payment or a market, at least something still remains of the farm business. But if we lose our crops or our livestock, there’s nothing left. This is not yet a reality in the UK on a large scale, but it’s already happening to farmers elsewhere in the world.

Despite the importance of our food and farming to tackling climate change, it hasn’t featured much in the process until the last two years, so time is short and a farming voice is essential.

I came across so many misconceptions and such a lack of knowledge it was frightening!  Agriculture needs to adapt to extreme weather events and a gradual warming trend, but it can also mitigate climate change by reducing its emissions (through productivity improvements and new technologies) as well as storing or offsetting carbon.

:: COP24 is the annual United Nations climate change conference (or Conference Of Parties), this year is the 24th.

You can read more from COP24 on NFUonline here.