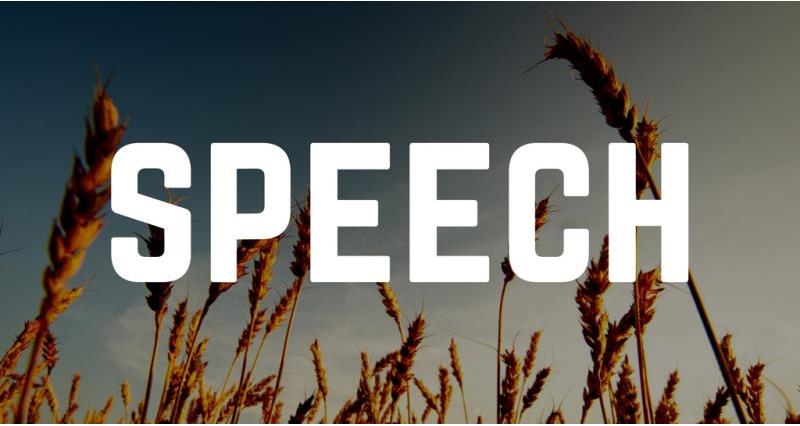 Good morning Conference and welcome to the ICC.

I am proud to stand here as a farmer.

And as I look around at this full conference we have around one and a half thousand people who I know are all proud to be farmers too.

Proud to produce food for Britain

Proud of our systems which ensure everyone knows exactly how their food is produced and where it comes from.

Britain is rightly proud of its farmers too.  For feeding Britain, for looking after over 70% of the British land mass, for employing half a million people.

And we are proud to be the bedrock for the UK’s largest manufacturing sector – food and drink.

Secretary of State, welcome to conference.  I know that you are also proud of Britain’s farming heritage but also crucially understand the importance of the industry to our country and the potential that farming has to be a solution to many of the problems facing Britain in this very volatile world.

The theme of this year’s conference is success.  Sometimes as an industry we can beat ourselves up by things that haven’t gone well.  Sometimes we can argue amongst ourselves and talk down our own industry.  Sometimes the day job of running complex businesses can be so absorbing we don’t get the chance to stand back and celebrate what is good.

But we do need to be vocal about our successes – now more than ever.

Because in a matter of weeks, Article 50 will be triggered.  Over the next two years negotiations will take place which will have a massive impact on farming and Britain’s ability to have a thriving food production system.  Brexit needs to be successful for farming.

The NFU will be there all the way.  And the NFU is a force to be reckoned with.  And when I say the NFU, I mean us – every single person in this room and our members across the country.

We are all farming, we are all the NFU.

We – the NFU – have already achieved more than most could ever have imagined.  On TB – 10 areas took part in the cull last year. Many said we would never do it five years ago… but look where we are now.  And Secretary of State – thank you for your support but please do not let down farmers in  other areas  this year who are desperate to tackle the scourge of TB in wildlife – you must roll out this policy further.

Look at what we – the NFU achieved on glyphosate.  The banning of this herbicide would have been devastating to Britain’s ability to grow crops.  We now need to ensure that this temporary reprieve becomes permanent – that science prevails and glyphosate is available as a vital tool on British farms.

Look what we – the NFU - achieved on BPS. The NFU has been relentless in pushing both Defra and the RPA to sort out the mess of 2015 and also ensure prompt payment this year. That we achieved a better result in 2016 is in no small part due to NFU members, Group Secretaries and County Advisers the length and breadth of the country lobbying MPs and bringing this to the attention of the media. But it’s also down to the professional work of our HQ staff and our Vice President Guy Smith; another great example of one NFU working together for the benefit of its members.

Look what we – the NFU - achieved on our Back British Farming Day in September.  Our Deputy President Minette led the event where well over one hundred MPs and Peers gathered outside the Houses of Parliament from all parties to show support for British farming and pledged to back the industry in the future.

Their support will be vital.

Thank you to my Deputy President and Vice President, to our staff and to all our members who have stood up and been counted.

So back to our theme for conference: success.  For the next two days we will consider what the ingredients of success are for farming in the post-Brexit world.

As the largest trade association in Britain you would expect us to take a lead on this.  And we have.

We carried out the biggest industry consultation in living memory to hear from our members on this issue which will impact farming for generations.  Every single NFU member was contacted.  Thousands came to meetings up and down the country and thousands more sent back consultation responses.

And we took those views from the grass roots membership of the NFU to establish our framework policy on trade, labour and domestic agricultural policy.

Secretary of State, I know you were keen to hear from farmers and I know that you will be paying close attention to what they say. But we mustn’t forget the public here. Yougov asked the British public whether they believed it was important for Britain to have a resilient farming industry: 85% said yes. When Yougov asked if we should increase our own self-sufficiency in British food, 83% said yes.  Secretary of State, when you commit to backing British farming you are committing to creating a healthier and wealthier Britain.

And it goes without saying, it’s important government also ensures there is  a better regulatory framework, a business environment encouraging  food companies  to invest in the UK, rather than overseas, and that farmers have access to new technologies.

But first of all we need to get the basics right

Secretary of State, I know that you share many of our ambitions for this most important of industries and that you are an enthusiastic champion for farming around the cabinet table. However, the industry still has many unanswered questions…

It is time for clarity, Secretary of State.

And a successful trade deal is the first of our vital ingredients for farming’s success. In the long term we should have an ambition to open up new global markets… but when we export about three times more food to Belgium than we do to Brazil, Russia, India and China combined how do we keep these important trade routes open and ensure a smooth transition to our new trading relationship?

We commend the ambition to open up trade with new partners. But how in reality, Secretary of State, will you keep out food produced to a lower standard than our own out? Would the British public want us to start importing beef produced using growth promoting hormones?  Or chickens dipped in chlorine?

British farmers produce food to world leading standards. We would expect all imported food to meet those same high standards. Four years ago we met here in the shadow of horsegate… I shall say no more about that but, Secretary of State let me be clear, no one will thank a Government for doing bad deals with new partners quickly, at the expense of keeping longstanding, good deals alive.

On to our second vital ingredient: People.  People are central to any business.  Farm businesses are no different.  Farming is reliant on being able to recruit both a permanent and seasonal workforce.  We have a very serious challenge right now.  The horticulture and poultry sectors – which are reliant on seasonal temporary workers - are already struggling to recruit enough people to work in our fields and packhouses.  And let’s be clear, this is about employing willing, able and productive people in large numbers, up to 95,000 by 2021, on a seasonal basis.  Secretary of State, we have offered you a solution and given you the evidence, will now you urge your cabinet colleagues to work with us to sort this out as a matter of urgency? Put simply, British food production depends it.  In fact, the entire food chain depends on it.

This isn’t just a problem on farm and it’s not just an issue with seasonal workers.  In December we joined forces with 74 other food processors and retailers with a combined turnover of 92 billion pounds to state, quite simply that without a workforce – permanent and seasonal, it wouldn’t matter what a new trade deal looks like, the lights would go out in our biggest manufacturing sector,  food will rot in the fields…  and Britain will lose the ability to produce and process its own food.

That is NOT what a successful Brexit looks like.

Our third ingredient – an agricultural policy anchored by three interlocking cornerstones. A policy that enhances the productivity and competitiveness of farm businesses. A policy that recognises and rewards the environmental goods that farmers deliver. A policy that mitigates against the effects of volatility.

Secretary of State, we can move towards an ambitious new system and a new policy where public investment is focused on farms becoming more profitable, more productive and more progressive and we are up for that challenge.  But - and this is important:

If we get a bad deal for farming, then measures to manage volatility - such as direct payments - will be an even more crucial element in helping farm businesses remain viable in an uncertain world.

Secretary of State, NFU members will also have been reassured by comments made by several of your colleagues, including your own farm minister last year that “The UK Government will continue to give farmers as much support – or perhaps even more – as they get now.”

This investment with the right trade and labour conditions, could deliver an even greater return to the country.

Secretary of State, when we first met in the summer of last year, within weeks of the referendum I asked you for two things – certainty in the short-term and confidence for the long term. Believe me you have our heartfelt, grateful thanks for providing certainty on payments until 2020. But now the real work begins.

We need you and your ministerial team to now build on the strong foundations that you laid down in July so that it’s clear how and why the industry will be better off.

NFU members want to deliver on a vision shared with Government for an increasingly profitable, competitive and sustainable food and farming sector.  Britain has a right to expect improved food security and enduring economic growth. Put simply farming contributes to the health and wealth of the British people.

Secretary of State I’ll conclude by repeating the offer I made to you on behalf of British farmers that same month.

We will work with you to achieve the best possible access to markets both in Europe and the rest of the world.  We will help you shape and deliver a new domestic agricultural policy, adapted to the needs of British farming and food production.  We will support your work enabling farming to be more competitive – and to have access to the labour it needs.   In return we will all feel the benefits of a thriving, productive and innovative food and farming industry.