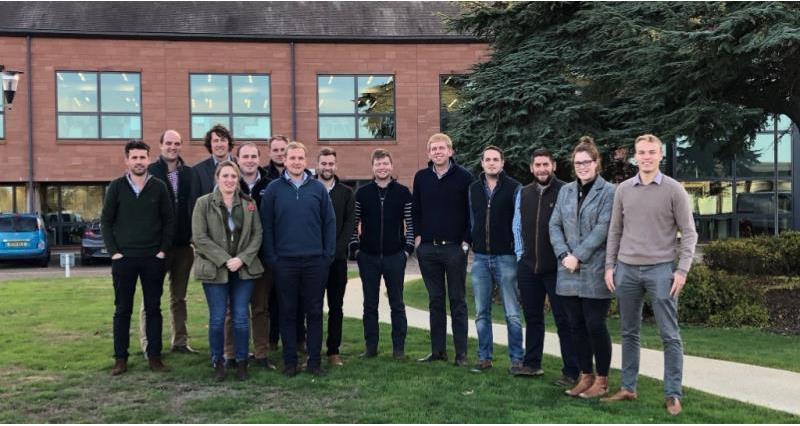 James Ashworth from Nottinghamshire reports on the NFU HQ visit with this year's Cereals Development Programme.

The second leg of the cereals development programme quickly came round, with candidates assembling at the NFU Head Office in Stoneleigh park and it was clear that we were keen to get cracking after a couple of weeks break.

The day was kicked off by Jack Watts and Chloe Lockhart, who make up the Combinable Crops team at NFU HQ. Between them they gave us a general overview of the work that is carried out on a day to day basis by the crops team, as well as how the National crops board is structured and the way in which information is fed back from or to the regional boards.

Tori Morgan of the NFU EU Exit and International Trade team was then given chance to the try and clear the murky waters that are Britain’s exit from the European Union. Even for the less politically educated amongst us she managed to do this and assured us that every effort was being made by the NFU to ensure agriculture’s voice is heard in amongst the negotiations. As if by prior planning the draft divorce bill was announced only hours after our briefing, I for one felt much more educated to try and make sense of what had been laid out!

Following on from this Emma Hamer was introduced, with the shortened time available to her after much Brexit discussion and debate, she managed to fill us in on what she and her team who work in Crop Protection and Plant Health are involved in and currently working on. The most pressing issue that comes to light is trying to feed the ever growing population of the world, with the ever reducing toolbox of chemistry as the next raft of active ingredient bans are announced.

Following a welcome lunch break, and chance to digest the information being fired at us throughout the morning, Charlotte Wardle was introduced. Charlotte is part of a small team that work for Red Tractor assurance, which is made up of 48,000 members across all agricultural sectors. Their primary aim is to protect the reputation of British agriculture, and highlight the standards that need to be achieved to provide greater marketing opportunities.

After a quick look around the offices at HQ to give us a feel of where the work is done, we were back to a talk from the AHDB. We learnt that the AHDB is now the combined levy board for all agricultural sectors and is primarily based on research with this accounting for 38% of its spend. This is followed by knowledge exchange, especially through their network of monitor farms across the UK. We also had a quick update from their grain marketing analysts, who monitor the markets and try and predict the trends, with both daily and weekly reports available to the public.

The focus of the day then shifted away from cereals and commodities full stop, as we were introduced to the NFU press team and how important this team is within the NFU, as well as briefly going over what is expected of members and delegates should we be called upon for an interview. With plenty to mull over, we were introduced to the dos and don’ts of interviews as well as how to stay on message and get key points across. We were also shown some good and bad examples, which gave us plenty of food for thought as we were told we had live interviews to give the following day.

With this daunting task fresh in our minds we moved to our overnight stay at the resplendent Ardencote Manor, where we were graced with the presence of Guy Smith, deputy president of the NFU. Following another excellent meal, Guy gave us his take on the current agricultural climate, and impressed on us the need to stay involved with the NFU, as the work it does is possibly more important now than it has ever been.

Wednesday morning was a different experience for most of us I think it would be fair to say, we were introduced to Tessa Morton, who was bought in to help with presentation skills and managing nerves. For those of us amongst the group thinking we could sink into our seats after a full-on day previously, Tessa certainly made sure this didn’t happen. Using various interactive techniques that she had amassed during a career on stage and as a presentation coach, she visibly made confidence within the group grow. This was done by taking us out of our comfort zone and by proven techniques to manage nerves before public speaking or crowd performance.

This was all good grounding for the afternoon, which saw Sam Ette and Mike Thomas from the media team return. This time they gave us a brief outline of how to approach radio interviews, should we ever be called up to provide one. We were then split into two groups and briefed on a subject, with one group including myself, reacting to the court case in the USA that has seen glyphosate come under fire and the second group trying to raise the profile of NFU’s #Your Harvest campaign. After individual interviews, we then had to critique each interview, with some real radio stars coming to light in the process, however everyone well and truly held their own.

This bought to an end two truly intriguing days at NFU HQ giving us an insight into the broad spectrum of work carried out. The next meeting is a visit around Portbury docks, followed by a tour of the Warburton’s bakery on Thursday the 22nd of November.

Keep an eye out for future blog posts from upcoming events!