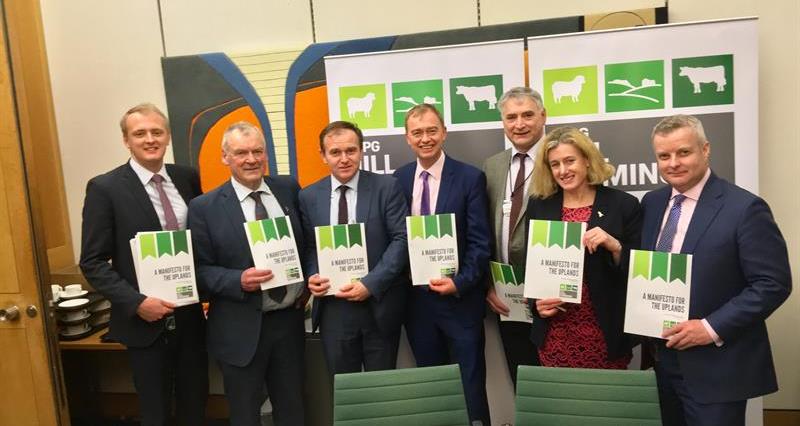 The NFU yesterday marked the relaunch of the Hill Farming All Party Parliamentary Group (APPG), which will work towards building a productive, profitable and sustainable uplands farming sector post-Brexit.

MPs heared more about the significant contributions of hill and uplands farming in producing food for the nation, maintaining and enhancing the environment and driving the rural community at a drop-in event in London, hosted by the NFU and Tim Farron MP. Agriculture minister George Eustice also spoke at the event.

“Upland farming is at the core of rural communities in Britain and plays a crucial role in producing high quality, safe and sustainable food for the nation.

“Farming this land also delivers a multitude of benefits for our cherished countryside, from grazing livestock to maintaining public footpaths. Caring for the environment and our iconic landscape is at the centre of all we do.

“As we look ahead to a future outside of the EU, it has never been more important that new policy decisions recognise the vital contribution of the uplands to the nation and ensure these agricultural areas are valued for all the public goods they deliver, long into the future.”

Impacts of a no-deal Brexit on the sheep sector

In a no-deal situation, there could be a trade embargo imposed on animals and animal products going to the EU while the UK gets reapproved as a third country exporter.

This could have huge impacts on the sheep sector as it exports 30% of domestic production, and of those exports, more than 90% go to the EU.

The NFU is working to deliver the best possible outcome from the Brexit process for British farmers. As well as calling on the government to do all it can to avoid a ‘no-deal’ outcome and any short-term political and economic turmoil, as part of it's six principles approach, the NFU is highlighting the need to:

The NFU has produced a Manifesto for the Uplands which outlines the many public goods uplands farmers deliver and the unique challenges they face, which will be available to MPs at the event.

Tim Farron MP will chair the APPG. He said:

“I've been delighted to work with the NFU to get our cross-party group back up and running.

"With the government planning to remove direct payments which are a lifeline to so many hill farmers, and with the threat of leaving the European Union with no-deal still on the table, the future for hill farming has never been more uncertain.

"That's why it's vital that there is a group in Parliament to speak up for the interests of hard-working British hill farmers who are so crucial both to the national economy and to the environment."

"I look forward to working with MPs from all parties, and the NFU, to help secure the most stable future for the industry and a better deal for farmers across the country.”

“As we leave the EU we have the opportunity to transform farming policy to reward those who work to ensure the countryside is left in a healthier state for future generations.

“Hill farmers already make a significant contribution to the environmental and cultural value of our rural landscapes, and there is the potential to deliver further public goods with our landmark Agriculture Bill. This means they should be well placed to benefit from our new Environmental Land Management system.

“I look forward to working with this new All Party Parliamentary Group to champion these farming communities.”

The NFU has agreed six principles that will guide its work to deliver the best outcome from the Brexit process for British farmers. They are: