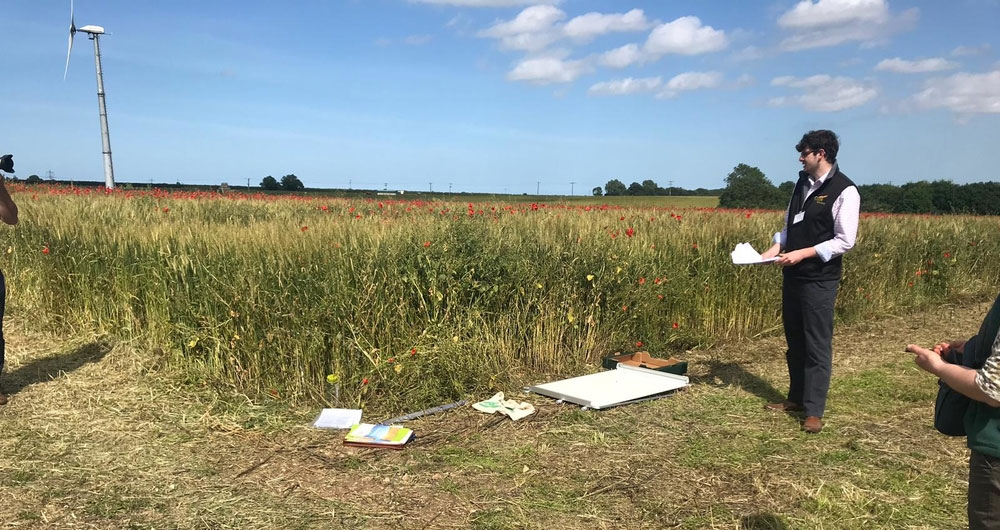 In 2018, 1.2% of the total combinable crop’s acreage was organic, and the UK was less than 33% self-sufficient which has led to a heavy reliance on imports for organic feed and human consumption grain. This presents an opportunity for British farmers to displace imported organic cereals.

For organic farmers to capitalise on this opportunity, there needs to be more development in the UK organic arable sector. Events such as the National Organic Combinable Crops conference (NOCC), run by the Organic Farmers & Growers organisation (OF&G) are vital in realising the potential organic homegrown cereals and pulses can offer through innovative and progressive research as well as bringing together farmers, seed breeders and crop researchers to talk about the industry. Read OF&G's NOCC 2019 report here.

The day began with Kimberley Bell of the Small Food Bakery who talked passionately about the food she was serving that had been sourced from the local area with the help of other bakers and pioneers in food. Kimberley believes that the current system is getting in the way of forging direct relationships and that new food commodities could be explored if we took more of a citizenship role in food. Her lunch menu, designed with the help of colleagues, included barley crispbreads with marrow fat pea hummus and roasted beetroot and turnips with fennel and popped wheat grains, all made using ingredients from Yorkshire.

Ambrogio Costanzo, head of crop research at the Organic Research Centre, was next to speak. He spoke about the concept of moving from conventional to organic, including the issue of pest control. Currently, many organic and non-organic farmers are looking more seriously at IPM principles, taking an environmentally sensitive approach to pest management using information about pest lifecycles and their interaction with the environment. Organic producers apply the concepts of IPM with limited use of naturally sourced pesticides. The Organic Research Centre is currently carrying out on-farm variety testing for the Liveseed project using varieties such as Crispin and Evolution. Ambrogio wants to work together to generate soil evidence to provide decision support for all farmers and supply chains. Find out more.

The third speaker was Simon Oxley, head of crop production systems at AHDB, who spoke about variety testing for the recommended list, specifically wheat, and the difference in variety performance across regions due to disease and weather. Simon mentioned the launch of a new app to replace the current pocketbooks for greater convenience.

The final speaker of the morning, Andrew Trump, managing director at Organic Arable, talked about the struggle organic farmers face in the UK compared to some other EU countries whose governments champion organics and the importance of keeping the premium of organic grain with the farmer. As the company reaches its 20-year milestone, he talked about its two key objectives. Firstly, becoming more ‘farmer focused’ through new memberships and annual member meetings and secondly to achieve ‘differentiation’ by better explaining why Organic Arable is different and how this difference benefits the organic sector as a whole. Read more about the business here.

Following the presentations, there was a panel Q&A made up of the speakers as well as Mark Lea (Organic Arable board member and supplier of Hodmedods) and Richard Thompson. Questions ranged from how organics should be promoted considering the current opportunities with vegan and vegetarian consumers, to changes in the recommended list for a more organic focus and the possible repercussions of an influx of foreign grain imports from countries such as Ukraine.

During the afternoon, we split into groups to learn more about specific areas of production: cereals and grains, potatoes, pig and feed, and soil. Richard’s farm has been organic since 1949 when his father Michael first converted the farm and it has now grown to 300 acres. York Grounds currently supplies major packers, processors and retailers across the UK.

Dr Elizabeth Stockdale, head of farming research systems at NIAB, spoke about soil health and management including the biodiversity that exists in the soil and the results of compaction. We were given samples of soil from an organic and non-organic field to compare the structure. Soil is becoming increasingly important for all farmers. It was clear from the discussions that there are huge opportunities for farmers to learn from each other across such areas as organic matter and earthworm numbers.

Through sharing this knowledge, which is part of the NFU Organic Forum strategy, and including conventional farmers in discussions about the environment, gains in a range of areas are achievable for all farmers. We also heard from Dr Edward Dickin, a lecturer from Harper Adams University who displayed many varieties of wheat to demonstrate the difference in characteristics of the varieties over the past 100 years due to breeding.

Overall, the day was a great success. The UK organic market, currently at £2.5bn, is growing year on year, however, individual consumption is low. According to Andrew Trump, ‘a heavy consumer of organics purchases only £35 worth a year’, suggesting that future demand needs to increase to help get the consumers and government on board. Over the next few years it will be important that the focus should be through increasing advertising to consumers in driving demand but also at a farmer and national level.