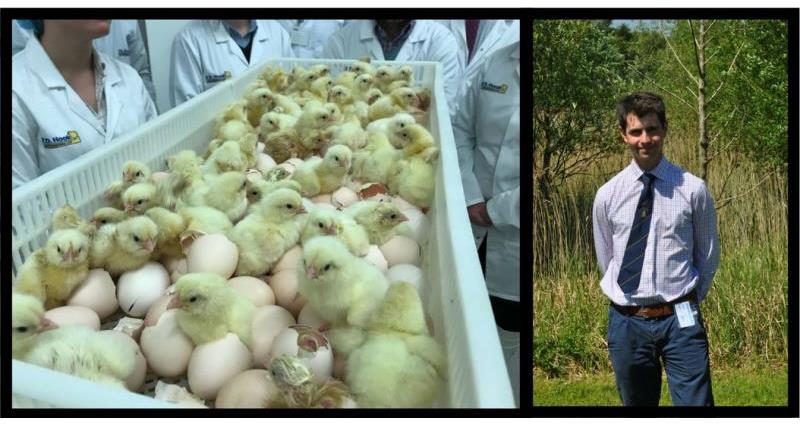 The NFU’s Poultry Industry Programme launched its third cohort in September 2017. Charles Roe, a young egg producer from Lincolnshire is taking part in the programme and describes the second visit which took place in October. He writes:

We were given a tour by Patrick Hook who was very generous with his time and allowed us to see the whole process through the hatchery. We saw the delivery of fertile eggs and then the huge amount of setting machines to continually rotate the eggs as the embryo grows. We saw the hatching machines and then through into the chick and transportation delivery areas.  One thing that struck me was the obvious attention to detail and the value of good staff. The machines are automated however the monitoring and care of the staff was integral to the whole process. The company obviously puts chick welfare as their top priority and the value and skill of a stockman was evident in all sectors of the hatchery.

The operation is considerable at Cote and I was struck by the organisation that must go into planning the parent flocks and the subsequent delivery of eggs to produce chicks to order. The broiler industry is extremely well integrated and this was a great example of how the hatchery fits into this system.

Later on Patrick gave us a talk on his Nuffield Scholarship from 2015 covering the broiler industry worldwide. He visited New Zealand, America and Australia to see different production methods and investigate a range of topics varying from use of antibiotics to free-range broiler production. I think many of us can get narrow minded with production on our own farms but after listening to Patrick I was reminded how good it is to speak to others and share ideas and thoughts. I was particularly interested in the segregation of the poultry meat market worldwide with some consumers happy to pay a significant premium for organic or free-range broilers, yet the majority will always prefer a bird from a high welfare commercial system.

Patrick also talked about Avian Influenza and described the dreadful sequence of events in 2015 in the U.S. with AI. Having recently returned from a second trip the U.S. two years on, Patrick told us that lessons have been learnt and having biosecurity on our minds at all times is crucial against the ever present threat of disease.

It was a fantastic visit that was arranged as part of the NFU's Poultry Industry Programme and I want to thank P D Hook for allowing us to gain so much from the visit”.