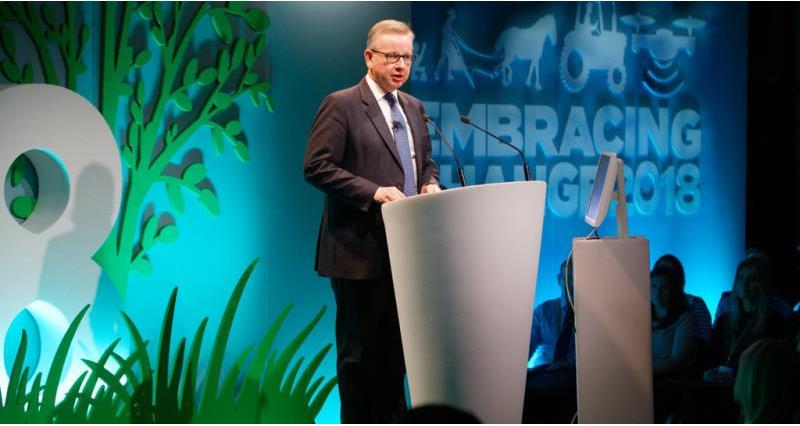 His speech can be read in full here.

The NFU has produced a summary of the key elements of his speech here.

Over the course of nearly 45 minutes, the Secretary of State gave a taster of what we can expect to see within the Government’s Command Paper on the future of farming, to be published later this Spring.

He set out four areas where he wants to drive change for farming, with subsequent plans;

In a direct call for action from farming industry leaders he says that there are “huge opportunities” for those in agriculture to play the leading role in shaping the future strategy.

He goes on to warn that: “Rather than devoting intellectual energy and political capital to campaigning for policy interventions designed to insulate farming from change, agriculture’s leaders can respond to growing public interest in debates about food, animal welfare, the environment, health and economic justice by demonstrating, as so many are doing, how their innovative and dynamic approaches are enhancing the environment, safeguarding animal welfare, producing food of the highest quality, improving public health and contributing to a fairer society.”

This is exactly what the NFU has done in presenting its Framework for Success document last autumn and there is a great deal of alignment between the SoS’s vision and the proposals set out in that document.

Together we share a commitment for a coherent national food policy and recognition that food production is “at the heart of all farming businesses”. We also very much welcome his pledge to champion high quality British food at home and abroad.

Today’s speech has given us a very clear indication that the Secretary of State expects change within the farming industry. He sees the opportunity for a bold and ambitious future that places a coherent food production agenda at the heart of Government thinking. It is a bold vision shared by the NFU.

We look forward to the consultation on the detail later this Spring and will continue to engage with Government and stakeholders on our vision for the future of agricultural policy.

Brexit timeline: How the NFU dealt with the big issues in 2017