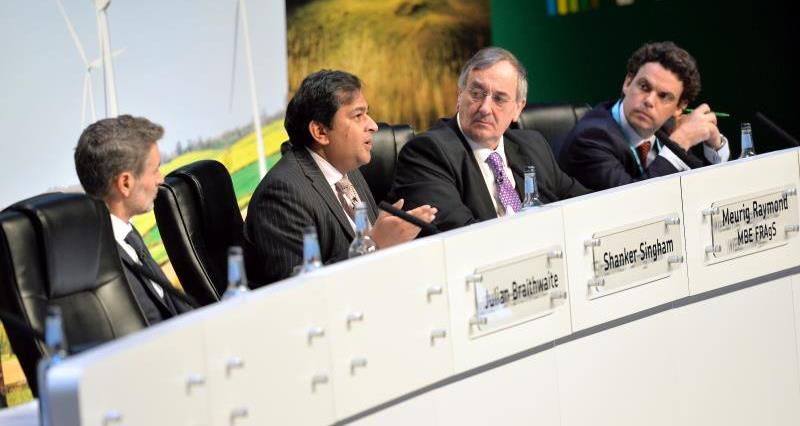 The future of British farming is full of potential was the message on day two of NFU Conference 2018 which opened with a discussion on the implications of post-Brexit policy on international trade and agriculture.

Shanker Singham, Director of Economic Policy and Prosperity Studies at the Legatum Institute, joined Ambassador Braithwaite, Ambassador and Permanent Representative at the UK Mission to the WTO in Geneva to highlight the opportunities that Brexit can afford UK farmers.

Mr Singham told conference delegates that leaving the EU will present an opportunity for the UK, and UK farmers, to establish a level playing field with the rest of the world.

Talking about the importance of fair competition, Mr Singham explained that nowhere is this more of an issue than in agriculture due to the vastly differing levels of subsidies around the world. He said that control of the UK’s regulatory system will be extremely important in ensuring that the UK has the best regulations in place to enable farmers to continue the business of farming without being shackled by red tape.

The Ambassador Julian Braithwaite outlined the work needed to re-establish the UK’s position in the WTO once the UK formally leaves the EU in March 2019.

NFU members were given an explanation of how the UK would establish its own schedules - the rules, tariffs and regulations - as smoothly and cleanly as possible without disruption to trade.

The Ambassador said: "The advice is to try not to change anything, as these have to be certified by all 164 members of the WTO. Our plan is to replicate the EU's existing regimes and tariffs. Ninety per cent of the substance of these agreements relating to how trade is done can simply be replicated but the other 10% (the bits relating to Tariff Rate Quotas (TRQ) can't simply be copied and pasted. This includes agricultural quotas and subsidies.

"This process isn't about changing the overall balance of trade, it's about doing our level best to minimise disruption. Our plan remains to submit our schedules before we leave the EU next year. This is because it's consistent with being in a customs union; the advantage is that we've clarified to the rest of the world what our baseline position is for trade.

"By taking control of our own schedules, we're best placed for the UK's interests."

Read how the NFU has been setting the vision for farming and Brexit: