An environment scheme that has really blossomed 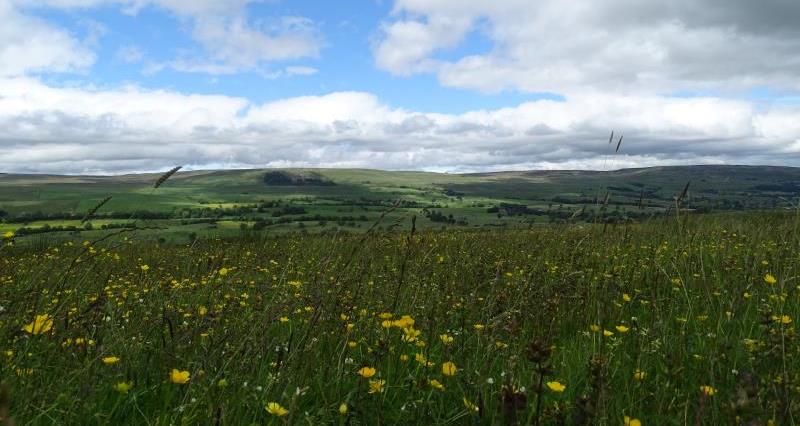 As a three-year pilot exploring a more flexible and practical approach to environmental delivery in the Yorkshire Dales comes to an end, the NFU’s Environment Forum went to see for themselves how it has worked. Regional environment adviser James Copeland writes:

The performance of current agri-environment schemes and the development of new schemes for a post-Brexit landscape are the focus of much debate amongst farmers, environmentalists and politicians.

With the current Countryside Stewardship Scheme under-subscribed, largely thanks to its very prescriptive approach, and farmers still reporting ongoing delays in agri-environment payments, it’s no wonder there is real interest in what the next reincarnation could look like. Many members express their concern that the benefits of decades of environmental delivery could be lost if the approach post-Brexit fails to hit the mark, and with uncertainty about the level of support that will be made available to the industry in the future, it’s never been more important to come up with a formula that builds on the environmental success of recent years and delivers a workable option for farmers as they move into a new era of ‘public money for public goods’.

This pilot aimed to explore a ‘payment by results’ approach, so unlike other agri-environment schemes, there have been no land management prescriptions and instead, the farmers taking part have been in the driving seat – managing the land as they see fit to achieve the desired outcomes. Payment has been linked to the delivery of a specific habitat and in Wensleydale the focus was on the delivery of species rich hay meadows and habitat for breeding waders.

The Yorkshire Dales was chosen because it contains a large proportion of the nation’s upland hay meadows as well as breeding populations of all four target bird species – curlew, snipe, lapwing and redshank.

The potential benefits were deemed to be: flexibility (or freedom to farm); motivation to succeed, efforts recognised and rewarded; verification by results not record keeping and potentially more cost effective as payments are linked to success.

But with the pilot now coming to an end and the results being assessed, what’s the verdict? Well it was the perfect time for members of the NFU’s Environment Forum to visit and talk to some of the people involved.

Livestock farming in the National Park has changed over the years, with a shift away from dairy to beef and with a reduction in sheep numbers. After the 2001 Foot and Mouth outbreak many farms changed their structure and with fewer livestock came a greater involvement in agri-environment schemes. The challenges presented by the most recent Countryside Stewardship Scheme have been felt acutely by farmers in the area and as a result, the Payment by Results approach (PBR) was seen as a practical way of providing alternative support to bridge the gap between the end of current mechanisms and future schemes post Brexit.

For all those involved, the success of the pilot has been such that the unanimous wish was to put all land – including that within existing schemes – into PBR. They had relished the opportunity to farm as they wanted to for food and the environment. The point was made that the current subsidy system is misunderstood by the public and that a mixture of prescriptive and results-based outputs would be easier to understand and support.

That said, as a new and very different concept, implementation was challenging for all parties. For advisers it was crucial to make sure farmers had the right skills and knowledge to be able to carry out their own self-assessment – had an understanding of hay meadow restoration techniques (often relying on the knowledge of the areas older generation) and how to effectively manage wading bird habitat as well as being able to accurately identify plant species. It was also important to optimise payment tiers to encourage participants effectively.

For farmers, there was a big resource requirement and for some a steep learning curve to deliver the necessary management and undertake their own assessment and scoring. The weather also had the potential to impact results. This was important as payments can go down as well as up, depending on the results achieved. It is therefore not surprising that farmers have highlighted the importance of training for participants.

Looking at the final scores and assessing how accurate the farmers had been, there was a little bit of over and under estimating compared to adviser scores – particularly when assessing breeding wader habitat due to the subjectivity of the measures and the highly sensitive payment bands. But meadow scores showed participants had picked up species identification skills quickly.

Going forward, the success of the pilot is attracting a lot of attention from Defra, the EU and stakeholders. There appears to be lots of potential, but there is a lot to consider:

NFU Forum members discussed the latter with scheme participants and the possibility of adopting a hybrid approach, with some more prescriptive elements that most farmers would be familiar with and an element of PBR.

Discussing the challenge of ‘who pays’, the group also explored the idea of ‘blended finance’ – a mixture of public and private money. This has already been trialled with some current peatland restoration projects, with funding coming from water companies and Europe and may be something that could help reduce the uncertainty of support going forward.

Fires and Force Majeure in Agri-Environment