Blog: Professor Chris Elliott on the challenges to the integrity of our national food system 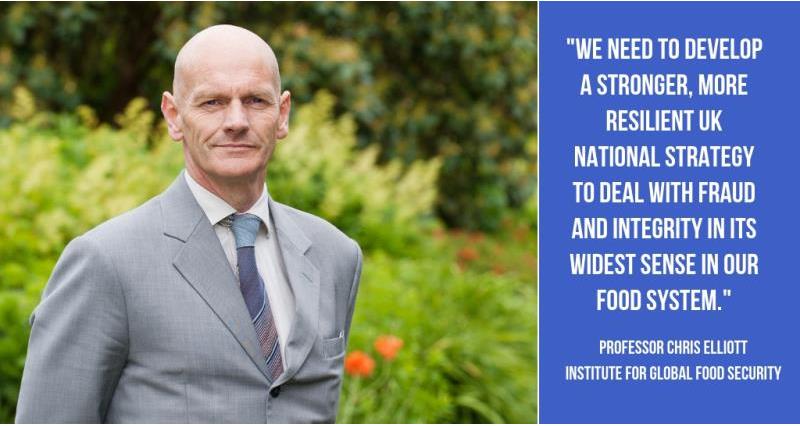 Professor Chris Elliott, Director of the Institute for Global Food Safety at Queen's University Belfast, writes about the integrity of the UK's food supply post-Brexit.

We have to think about and act on the integrity of the national, and indeed global, food supply system to have any chance of meeting the needs of the UK going forward. Of course this then begs the question, what is a food system based on integrity? I’ve taken the 1996 UN definition of food security and adapted it to what I think we all need to concentrate on going forward.

Food integrity: When all people, at all times, have access to food which is safe, authentic and nutritious. The systems used to produce the food are sustainable, ethical, respect the environment and protect the human rights of all workers.

There are many interlocking aspects to this definition and all are equally important. However, without dealing with the massive issues of fraud that persist and taint multiple sectors of the agriculture and food industries could we ever have a national food system based on integrity? I think not.

The 2013 horse meat scandal was a wake up call for many and the UK has responded in an extremely positive manner. In response to the 2014 Elliott Review two important initiatives were launched.

I believe these organisations working together will help protect the more mainstream parts of the UK food supply system from fraud. However, the challenges are enormous and many areas of our system remain very vulnerable. Recent data published by the FSA showing the degree of adulterated/mislabeled meat on sale across the country is a clear indication of this. My fear is that we will have a dual food supply system in operation in our country, one well policed and the other left to rogues to exploit.

What does this mean for the future?

The future for the UK is very uncertain in terms of Brexit and the impact of a no deal scenario. I don’t think anything could be more affected than the integrity of our food supply. I’m aware that already the flow of intelligence on food fraud from Europe to the UK is not what it was once and it could get a lot worse.

In isolation, can the UK cope with the multiple issues that occur in a highly complex food supply system? I fear not. The level of ingenuity and the scale of fraud I observe, study and try to deal with, in many parts of the world (that import food into the UK) often beggars belief. How far we are away from another scandal is anyone’s guess - mine is that we may not be as far away as many think.

We need to develop a stronger, more resilient UK national strategy to deal with fraud and integrity in its widest sense in our food system. A partnership across all sectors of the agri-food industry is needed but this needs to be encouraged and supported by our government.