Progress and partnerships at COP26: Our news from week one 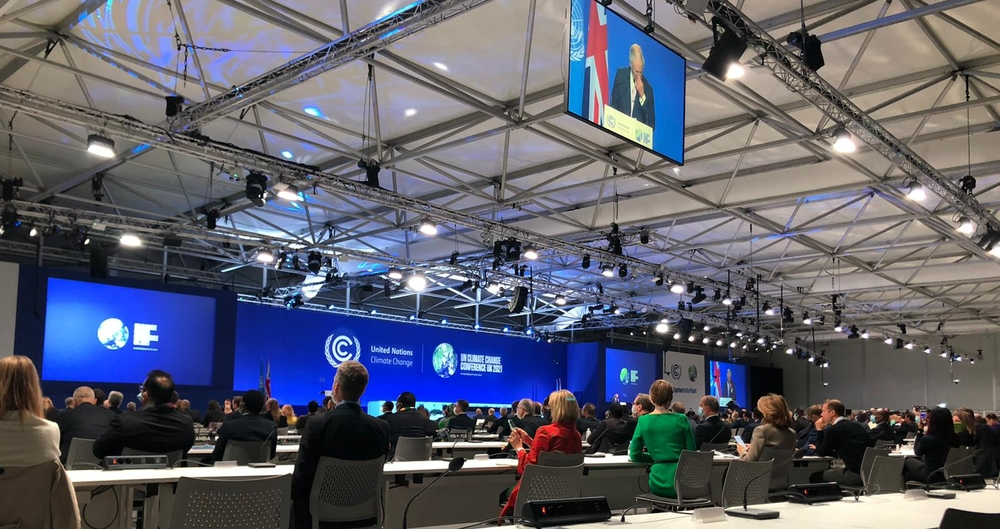 Read all the key news for farming from our team at the event. 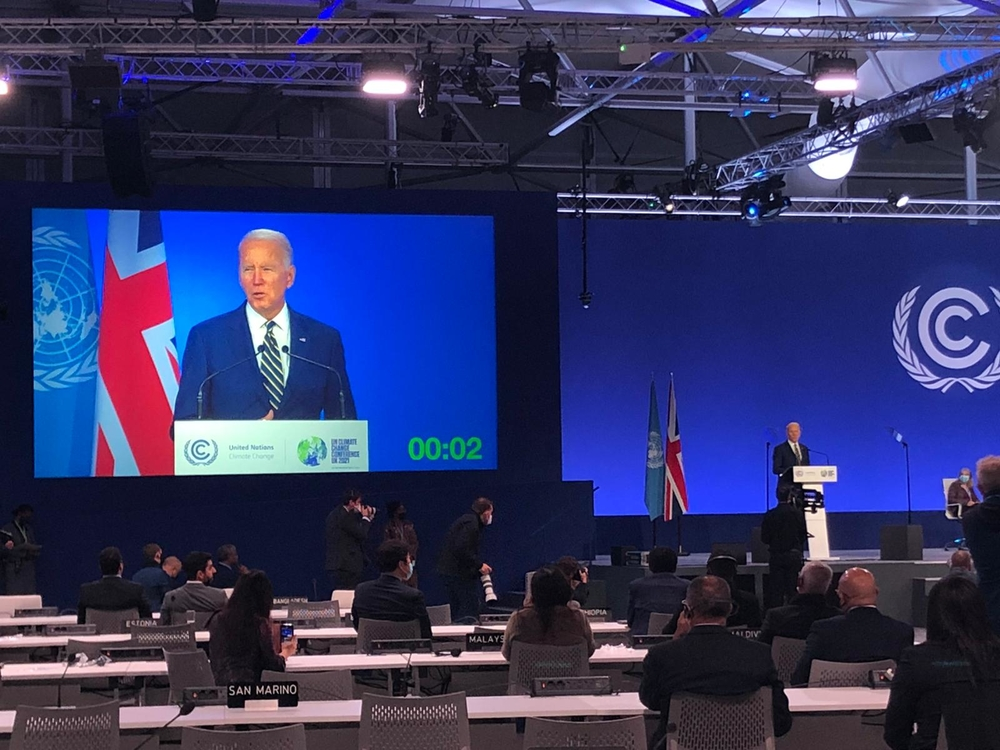 The conference kicked off with addresses from some influential speakers – Sir David Attenborough, Prince Charles and US President Joe Biden – and some big announcements.

The three key announcements were:

However it seems that despite this ‘progress’ many delegates were urging caution. Some long-standing issues in the negotiations are unresolved. They may not be as glamorous as the big announcements earlier in the week but they are really important for the implementation of the Paris Agreement. In addition, developed countries have still not delivered on the $100bn target promised to developing countries. As many ministers said at the Pre-COP event in Milan last month, this is a matter of trust, so reneging on an earlier deal will not have helped the mood. 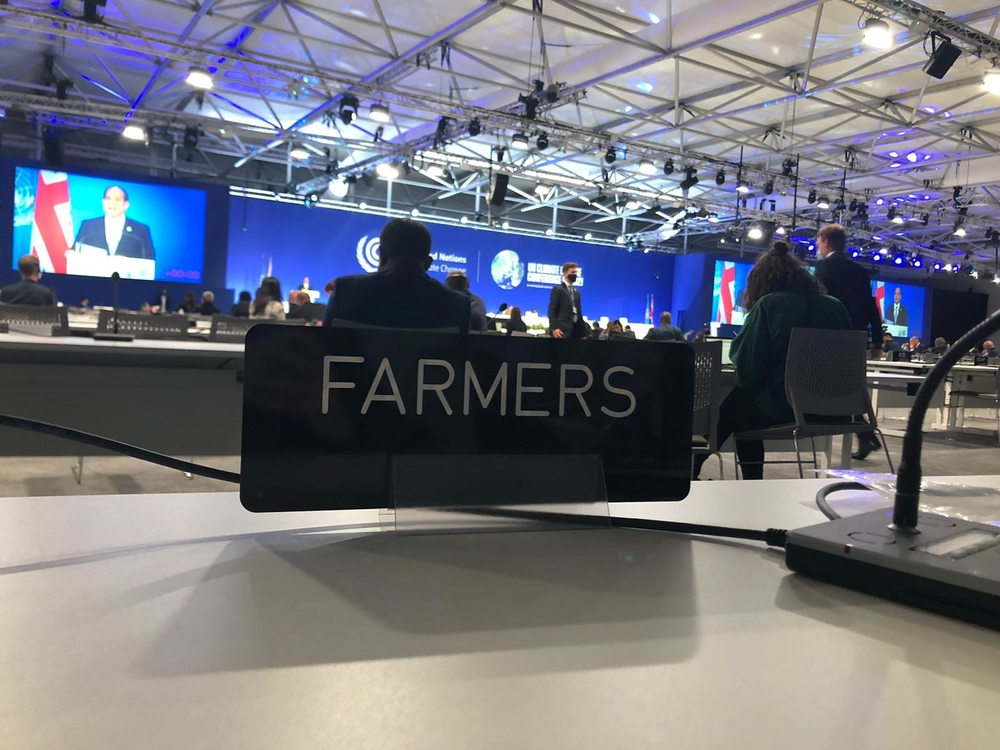 Farmers’ Day on Wednesday 3 November saw various members of the Farmers' Constituency out in force on many platforms. There was much talk about agriculture as part of the solution. The NFU’s side event, Agriculture’s Ambition – delivering food security, resilience and mitigation in a changing climate really hit the mark. It involved the presidents of all four UK farming unions in collaboration with the Canadian and German farming organisations and AgriCord, which supports developing country farmers’ organisations. It demonstrated the power of farmers, regardless of our differences, speaking with one voice on this international stage.

It was a theme of strong partnerships again on 4 November when NFU President Minette Batters, representing the World Farmers' Organisation (WFO), took the stage with US Agriculture Secretary Tom Vilsack to talk about climate action for the global dairy sector. The journey to carbon neutral food production is like scaling a ladder and the pressures are huge. Through the WFO, farmers are taking the lead with the Climakers programme driving knowledge exchange through science-based solutions. The NFU’s net zero goal effectively opened the doors to put farmers at the heart of the discussion through our three pillars of resource use efficiency, nature-based solutions, and the bioeconomy and renewables. Partnerships are hugely important as shown by the UK dairy sector coming together to publish the recent Dairy Roadmap. 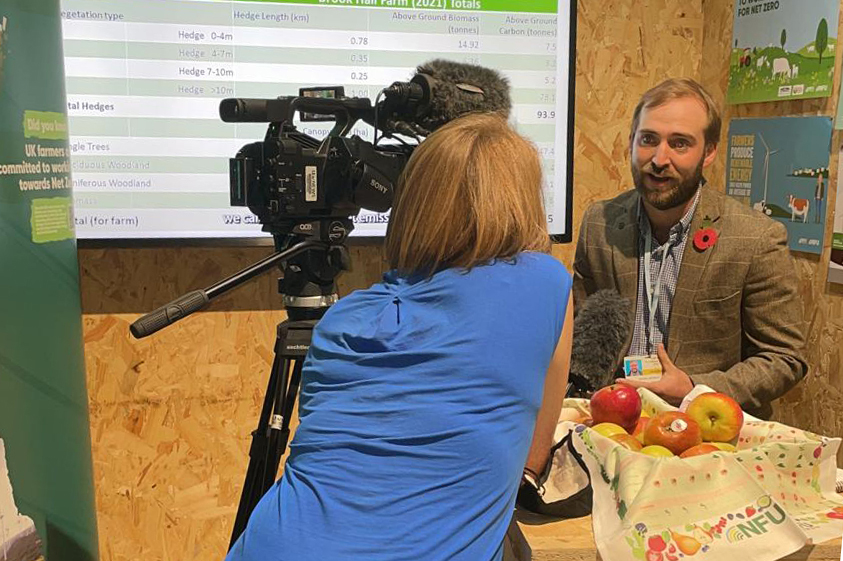 Pictured above: North Yorkshire farmer James Johnson being interviewed on the NFU's exhibition stand at COP26

The NFU’s exhibition in the public facing 'green zone' on 3 November was a roaring success, with North Yorkshire young farmer James Johnson manning the stand. He had many productive discussions with the public, and was impressed with the level of knowledge and interest in where their food comes from. A key theme of the discussions was the role of livestock on farms, and James brought to life the importance of his animals in the role they play in maintaining a productive, sustainable farming system.

The continuing negotiations under the Koronivia Joint Work on Agriculture (KJWA) saw governments shut the door many times to the Farmers' Constituency and other observers. The KJWA is supposed to report at this COP and this is so important as it is the only work under the UNFCCC that directly relates to agriculture. We will be providing an update on the outcomes of these negotiations.