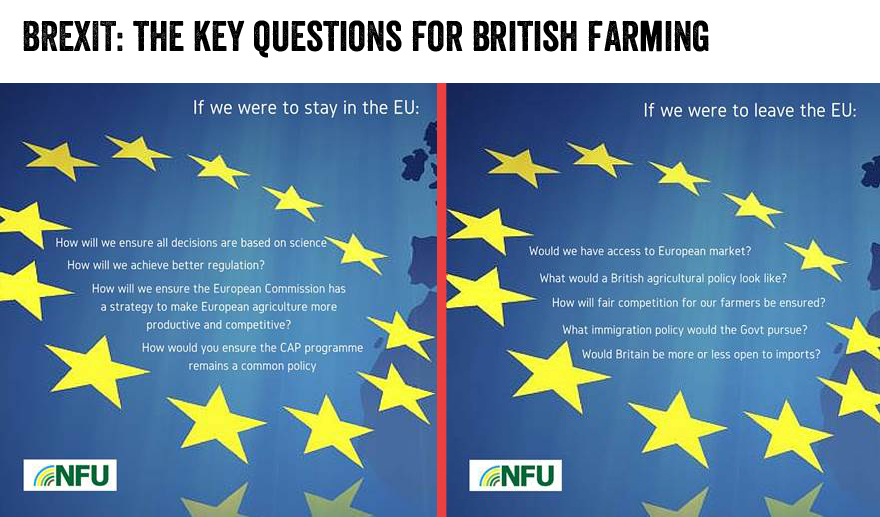 Watch this and other key #NFU16 sessions live from Birmingham.

NFU Conference will host an open debate, tomorrow from 11.30am. George Lyon will speak for the Britain Stronger In Europe group and Daniel Hannan MEP will make the case for a Brexit. Delegates will hear first-hand the views from the two opposing sides of the EU referendum vote and their opinions on the key issues that matter to British agriculture.

Conference delegates, made up of farmers throughout England and Wales, will have an opportunity to put their questions on the future of EU membership to the speakers.

Following the announcement of an EU referendum on June 23rd, now is the time for those on both sides of the debate to make their case clear and to convince farmers which way to vote.

NFU President Meurig Raymond said: “I fully expect this year’s Annual Conference to have a real buzz about the upcoming referendum and I am sure our debate will spark a lot of views and interest. We have deliberately scheduled a lot of time for delegates to really challenge the speakers from both either side of the debate.”

The debate comes as the NFU announces plans are currently in place to model the impact of a Brexit on UK agriculture. In order to help provide clarity around this debate, the NFU has asked LEI Wageningen UR, a research institute in the Netherlands to run different scenarios in the event of Brexit that can show the impacts on the UK agricultural sector, the findings of which will be out in the coming weeks.

Mr Raymond added: “The UK’s relationship with the EU is under intense scrutiny ahead of the referendum in June. The Wageningen University study will identify which elements of agricultural and trade policy the NFU will lobby for if the referendum results in the UK leaving the EU.

“Our EU report in 2015 was aimed at providing members with information about our existing relationship with the EU. That report has proven very popular and what’s clear is that many farmers seek more information before coming to decision which way to vote. We hope our latest economic study and the debate at this year’s Conference will provide more vital steps in allowing members to more fully appreciate the impact of both possible referendum outcomes.”

LEI Wageningen UR will elaborate three trade scenarios and three support level scenarios. It will estimate the outcomes on the sector’s production and trade, on farm gate price levels and on farm income. The scenario analysis will be conducted by using an econometric model and a farm level model.

The NFU will also be reiterating it’s asks of Government during its EU debate session later today: