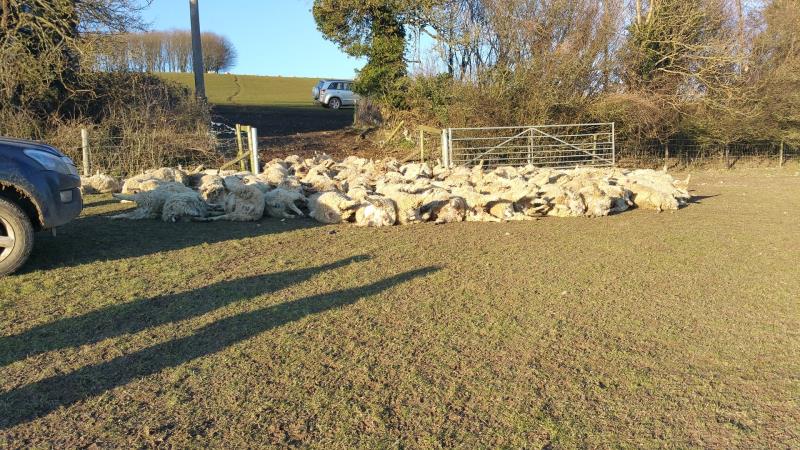 The horrific discovery was made by farmer Gordon Wyeth at the West Dean Estate early on Monday afternoon (March 7). The sheep, many of them pregnant, had been herded into a tight group against a fence and gate bordering woodland where they had panicked and had either died from shock or by being crushed in the flock.

Sergeant Tom Carter from Sussex Police said: "I have never seen or heard of sheep-worrying on this scale before and this was a terrible sight. While there are no signs of any of the animals being savaged, we are all but 100 per cent certain that their deaths were brought about by dogs.

"The flock was last checked around lunchtime on Sunday, so the incident could have occurred at any time over the next 24 hours. However, if as we suspect it was a dog attack, it may well have happened in daylight and we want to hear from anyone with information about it.

"This is not just about the Mr Wyeth's livelihood - and it will cost him at least another £2000 to dispose of the carcasses - but also his emotional attachment to the animals that he has raised and nurtured."

James Osman, the National Farmers' Union adviser for Sussex, said: "This is the worst incident of its kind in living memory and talking to colleagues around the country, the number of deaths is double what we have come across in the past.

"We are in full support of the police's efforts to discover whose dog or dogs were responsible and urge anyone with information to get in touch with them."

Sgt Carter continued: "We have seen a rise in sheep-worrying incidents and as Spring approaches more dog owners will be heading for the countryside to exercise their pets. We urge people to keep their dogs on a lead while they are walking in rural areas and around livestock. So often in these incidents the owners are horrified by what their dogs have done, but they have to accept that even the most docile of pets can quickly turn into a killer given the opportunity."

"A farmer can legally shoot a dog that is chasing livestock and seek compensation from the person responsible for the animal, so please don't take the risk."

Anyone with information about the incident is asked to email MTAxQHN1c3NleC5wbm4ucG9saWNlLnVr or call 101 quoting serial 862 of 07/03.

Dog owners are also reminded to check their properties are dog proof.