Setting the record straight: Article in The Times 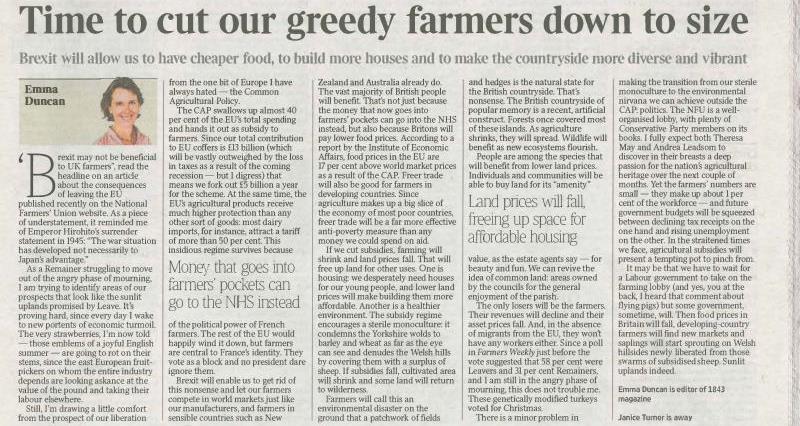 An extract from the following letter was sent to the Times and it set to be in print on Friday July 15 2016. President Meurig Raymond writes:

Emma Duncan’s article describing farmers as ‘greedy’ is wrong on many levels. How can our countryside possibly be compared to a “sterile monoculture” when farmers voluntarily create flower habitat covering an area equivalent to 12,000 football pitches? Farmers’ contribution to the countryside is valuable - tourist revenue is worth around £1.49 billion from areas maintained by livestock.  How can Ms Duncan suggest that support payments falling, the cultivated area of land shrinking and productive farmland turning into wilderness would be positive things for this country?  England’s upland National Parks alone receive nearly 70 million day visits every year, with visitors spending £1.78 billion and The Welsh uplands receive a further 18 million day visits every year, putting £205 million into the Welsh economy.

Ms Duncan’s statement that ‘freer trade will also be good for farmers in developing countries’ is also wrong. The EU already grants tariff free access for food imports from Lesser Developed Countries (LDCs) and African, Caribbean and Pacific Countries (ACPs), whilst imposing import duty from other primary producers. This provides those LDC and ACP nations with an opportunity to sell their produce to the EU at higher prices than they would normally receive from the world market. As a consequence, to remove all import tariffs would put these developing countries directly in the face of a competitive playing field against other and often more efficient producers.

Emma Duncan’s reference to the Farmers’ Weekly online poll to demonstrate that farmers were in the majority voting to leave the EU is also open to question. As the largest organisation representing English and Welsh farmers, the NFU worked with its membership to gauge their opinion before taking its own ‘remain’ position in the run up to the EU Referendum. We carried out a survey of our membership which showed that 52% would vote to remain in the EU when polled. For those who were waiting for more information before taking a decision we produced a report setting out the UK farming industry’s relationship with the EU and subsequently commissioned an impact assessment from experts of the potential ‘Brexit’ scenarios on farming.

Our farmers are already coping with the significant price volatility and price deflation that the global marketplace demands but also from the price pressure they face at home from the power of the big supermarkets. You are right to recognise that NFU is an effective lobbying organisation – we will be using our influence and our recent findings from a study with the esteemed Wageningen University to put forward our plan for the agricultural sector. The reality is for reasons just stated is that Britain needs some form of agricultural support.

As for the insinuation that more farmers voted leave at the industry’s peril, there aren’t any statistics on which way farmers voted in the referendum. There is no basis for Ms Duncan’s assumption that most farmers voted to leave. For what it’s worth, the NFU’s pre-referendum survey of thousands of its members showed over half of those who had an opinion expressed that British agriculture would be better off in the EU.