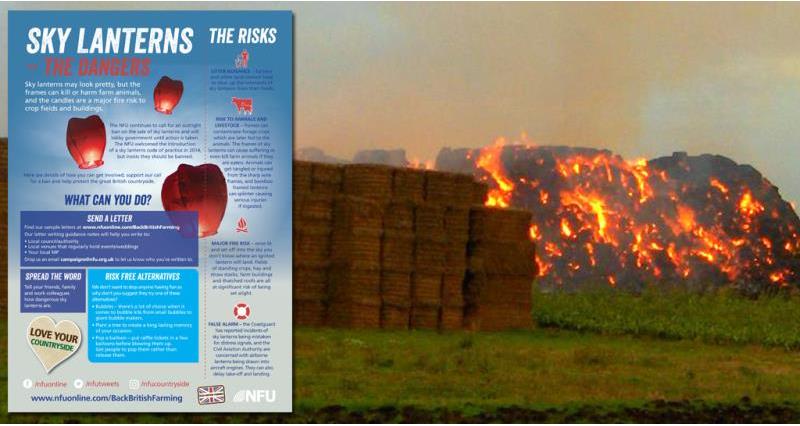 The release of flying lanterns into the night-time sky may look pretty, but the end result is litter, the frames can kill or harm farm animals when ingested and the candles are a major fire risk to fields of crops and buildings.

The NFU continues to call for an outright ban on the sale of sky lanterns and we will continue to lobby government until action is taken.

NFU Deputy President Minette Batters said: “I know from personal experience just how dangerous sky lanterns can be after losing a cow from my own herd which died after eating some fine wire from a lantern that landed on the farm - the post mortem revealed that this was the cause of death.

“But it’s important to point out that it’s not just farm animals which can be affected. Sky lanterns cause fires to crops, grassland on moors and bales of hay and straw that have been stacked, which can lead to a loss of buildings.

“It is really encouraging that local authorities are now starting to see sense and have banned the release of lanterns on their land. However, we would like to see many more follow suit. Members of the public can play a big part by writing to their local councils spelling out how dangerous sky lanterns can be.

“Please back British farming and think twice before setting sky lanterns alight and releasing them into the environment. The NFU continues to call for an outright ban and we will continue to lobby government until action is taken.”