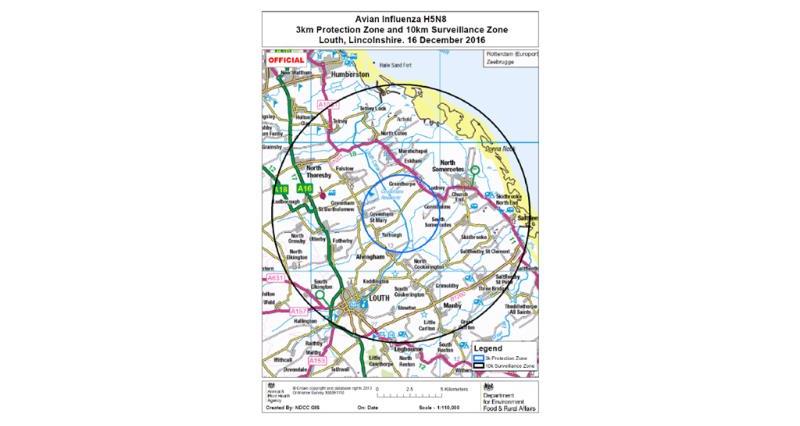 This is the same strain which has been circulating in mainland Europe and which was found at a poultry farm in Lincolnshire last week, although there is no suggestion the disease has spread from that farm.

“Today’s confirmed findings mean that avian flu has now been found in wild birds in widely separated parts of England, Wales and Scotland.

“This is far from unexpected and reflects our risk assessments and the measures we have taken including introducing a housing order for poultry and a ban on gatherings. We’ll continue to work with ornithological groups to further strengthen surveillance and our understanding of the extent of infection in wild birds.

“The risk to kept birds cannot be eliminated by housing alone. This virus can be carried into buildings on people and things to infect birds. Good biosecurity measures are essential.  We also need people to continue to report findings of dead wild birds so that we can investigate".

“This finding serves to remind us all of the risk of infection. The Prevention Zone and temporary suspension on gathering of poultry remain in place. It is also important that bird keepers practice the very highest levels of biosecurity. Even when birds are housed, there remains a risk of infection and keepers of poultry and other captive birds should ensure every effort is made to prevent contact with wild birds. The movement of poultry should be minimized, and clothing and equipment should always be disinfected.”?

NFU chief poultry adviser Gary Ford said: “The Department for Environment, Food and Rural Affairs (Defra) has confirmed that Avian Influenza (AI) H5N8 has been identified in a commercial flock of turkeys near Louth, in Lincolnshire.

“As part of the swift measures taken to contain and eradicate the disease, a 3km Protection Zone (PZ) and a wider 10km Surveillance Zone is in place, centred on the affected farm. This will have a significant impact on the farms within the zones because movements are restricted on and off farm.

Are you in a zone?

“The NFU remains in close dialogue with both Defra and the Animal and Plant Health Agency on this issue and we are working to support our members within this area.

“It is worth reminding people that the risk to public health from the virus is very low and the Food Standards Agency has also made it clear that bird flu does not pose a food safety risk for people.

“This is a very important time for turkey producers across the country. While this news will have significant impact on those farm businesses within the control zones we anticipate little impact on the Christmas market. People wanting to buy a British turkey for their table will still be able to do so with confidence.”

Find the map and the full details of the zones in the Defra Zone declaration here.

Dial 03000 200 301 to contact the APHA about movement licences, press option 1 for AI and then follow the instructions.

Defra has brought in a temporary suspension on gatherings of birds at higher risk of avian flu across England, Scotland and Wales from 20 December.

The ban on gatherings applies to birds at higher risk of avian flu, this includes the following, and restricts events such as livestock fairs, auctions and bird shows.

Bird gatherings involving pigeons, aviary birds and certain other captive pet birds (strictly, columbiformes, passerines and psittaciformes) are only permitted (outside the Protection and Surveillance Zones) subject to strict general licence conditions (read more about the conditions of a general licence in England and Wales).

The collection of wild game birds is not affected by these measures.

APHA has made the following licence forms available. If you have any queries call APHA on 03000 200 301.

The latest General Licences are available on the Gov.uk website, they include:

Meat from the Protection Zone

Specific licences must be applied for and obtained from APHA. If a licence is issued, it will allow a one-off movement and be subject to certain conditions based on disease control risk.

The form is in a word format (download from here), it can be filled in electronically and emailed to b3V0YnJlYWsubGljZW5zaW5nQGFwaGEuZ3NpLmdvdi51aw==

Specific licences which are currently being issued on request include:

There is no licence required for the collection of fallen stock, however, good biosecurity practices, such as cleansing and disinfection of vehicles on and off the premises, should be followed.

Are you in a zone?

Find out if your farm is in a zone on the Defra interactive map.

What does being in a zone mean?

In a Protection Zone the farmer must:

All premises within the PZ are also in the SZ.

In a Surveillance Zone the farmer must:

Anyone involved in the transport or marketing of poultry or poultry eggs must also make a record of those that are transported or marketed.

For concerns about the health status of your own flock please contact the vet or the APHA on 03000 200 301. 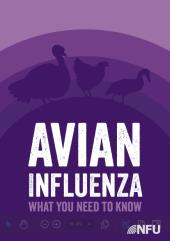 Download the NFU Avian Flu guide - the links producers might need when there is an AI outbreak and other useful information. You'll find a link to the guide, along with contingency planning and useful links here.

Further advice on AI is available via the links below:

- GOV.UK - Avian Influenza page: Latest news, guidance on how to spot AI, what to do if you suspect it and measures to prevent it

- FSA - Advice for the public on bird flu