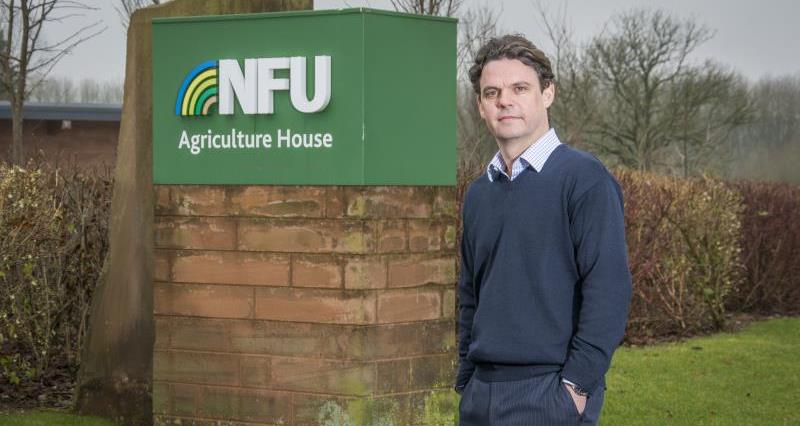 Q. What is top of the list of your priorities? Why?
A. There are four big priorities for the NFU right now – trade, labour, regulation and domestic agricultural policy. All of these are interconnected, and will need resolving in the next two and a bit years as we approach the day we exit the EU. There will be numerous long-term challenges after that date, but the immediate challenge is to get the right deal for farming across all of those areas.

Q. What is your evaluation of the political landscape right now? How will this impact British farmers?
A. The political landscape is going to be one of the major factors complicating the Brexit process. In Westminster we have a Parliament that was largely opposed to leaving the EU which will scrutinise the agreement the government eventually negotiates to leave. Across the UK, we have two of the home nations (Northern Ireland and Scotland) where a majority voted to remain, and who will want their say on the final deal (as will Wales). And in Europe, we will have to negotiate with the 27 other EU member states, all with differing priorities and some, such as France and Germany, with critical elections this year. All of this makes for an extremely intricate and delicate political backdrop against which to reach a settlement. Politically, there will also be a tension between those who see Brexit as an opportunity to liberalise trade – with all the attendant risks (and indeed opportunities) for domestic producers throughout the economy – and those who want greater controls of our borders. All of which will impact farming, for instance through increasing access to food imports, or conversely restricting access to seasonal labour. Our task will be to navigate a sensible approach that supports UK agriculture across all of these crucial issues.

"There will be numerous long-term challenges, but the immediate challenge is to get the right deal for farming."

Q. How are you going to make sure British agriculture is heard during Brexit negotiations?
A. The NFU is already engaging heavily with key personnel in UK Government, from No.10 and the Treasury, through important Whitehall departments such as Defra, the Home Office and the newly created Business, Brexit and International Trade departments. The more members can get involved and meet their MPs, the greater impact we will have together. The NFU team is also liaising with other organisations, both within and beyond the farming sector. We’re pleased, for example, that the Confederation of British Industry, with whom we work closely, recently called for a “whole economy” approach that promotes the industries of all sectors of the economy, including farming, as the government negotiates the Brexit terms.

Q. Who is in your team? What will they do?
A. As I write I’m recruiting two policy advisers, who hopefully will be starting very soon, and we will adapt the team as circumstances require. But, of course, we also have the resource of the whole of the NFU to call upon. While it’s important not to forget there’s a “day job” for NFU staff, getting the right deal out of Brexit is going to be an enormous task for the whole organisation. In particular, we’ll be harnessing the expertise within our policy and communications departments to firm up the fine details of what NFU members want out of Brexit. We will then go out and make a strong, credible and authoritative case for it. I’ll be working very closely in particular with the new external affairs team in London, where I’ll be based, in taking our messages out to politicians and stakeholders. It really will be a whole-NFU approach and we’ll be calling on our members to get involved as much as possible where appropriate.

Q. What do you think is the biggest opportunity for farming during Brexit negotiations?
A. We are being given a once-in-a-generation opportunity to shape the future of UK agriculture – an opportunity that wasn’t really possible while we remained a member of the EU and subject to CAP. We can now work with government to shape a domestic agricultural policy that promotes competitive, profitable and progressive farm businesses, designed to meet the specific needs of UK farmers, rather than the disparate vagaries of an agricultural sector stretching from Scandinavia to Greece. We have the opportunity to devise regulation that achieves its aims without obstructing farmers from running efficient and profitable businesses. And we can promote sustainable production systems suited to UK farms that showcase the great work our farmers do in protecting and enhancing the environment in which they operate.

"We can now work with government to shape a domestic agricultural policy that promotes competitive, profitable and progressive farm businesses, designed to meet the specific needs of UK farmers..."

Q. What is the biggest risk? What are your plans to minimise this?
A. While I’m a natural optimist, it would be remiss of me not to acknowledge that Brexit carries some significant risks for farming. Our job is to minimise those as much as possible. One obvious area is trade. Will our farmers still be able to access the European markets where two-thirds of our produce currently goes if the costs of export go up? Even if we can negotiate a free-trade deal, non-tariff barriers will complicate the business of trading with the EU. And of course, subsequent trade deals with other countries – such as with the US, Australia or New Zealand – have the potential to significantly disrupt some of our domestic farming sectors, for instance our livestock industry. Labour is another area of concern, where the government’s commitment to reduce the numbers of “unskilled” workers coming into the UK could lead to serious shortages in on-farm labour, for instance with the seasonal requirements of the horticulture sector. We are already very active in lobbying government on these issues, and will continue to press the case for an approach that recognises the importance of UK agriculture and policies that enhance rather than undermines our contribution to the domestic economy.

Q. How will you make sure NFU members feed into the work of the NFU on Brexit?
A. We’ve already carried out one of the biggest consultation exercises with the NFU membership over the autumn, canvassing views on Brexit, and we’re continuing to engage directly through discussions on Brexit policy at regional and national commodity boards and forums, NFU Council, policy board and beyond. It’s important that we maintain this level of member engagement throughout the whole process. Our members are one of the great strengths of the NFU. The key for me is to ensure really strong two-way communication so that we properly take into account members’ views and expertise as we devise policy, and so that they are up to speed on the latest developments. It’s critical that, together, we are consistently taking the same message to policy makers, the media and the public. This could be in meetings with government ministers here in Westminster or MP meetings back in their constituencies.

"The key for me is to ensure really strong two-way communication so that we properly take into account members’ views and expertise as we devise policy, and so that they are up to speed on the latest developments."