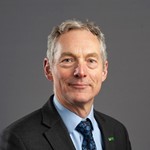 Andrew Clark is the NFU’s Director of Policy, based at NFU HQ, Stoneleigh Park, Warwickshire. He manages the NFU’s policy development teams which span key commodity, food chain, animal health and cross-cutting policy and professional service teams. Andrew was appointed to his current post in July 2014.

He joined the NFU headquarters in January 1993 from Hertfordshire County Council and has filled a variety of roles including Chief Environment Adviser and, prior to his current role, Head of Policy Services.

Andrew lives with his family in Worcestershire where he grew up on a hop and fruit farm. He has a PhD in Environment Science from the University of East Anglia and is a Chartered Landscape Architect.