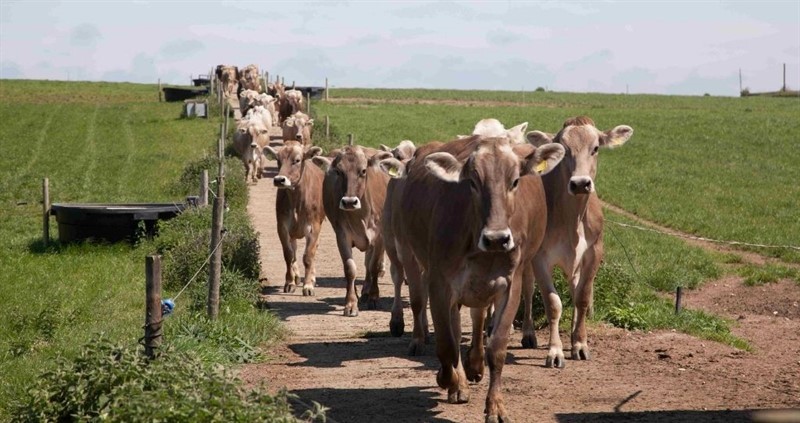 Stephen Temple farms approximately 230 hectares or 570 acres in Wighton, Norfolk. In the build up to World Rivers Day on 26 September, we found out how Copys Green Farm is moving toward a better carbon future and actively managing nutrients to improve productivity, soil health and water quality.

The dairy herd is almost pure pedigree Brown Swiss, with 126 cows and 79 youngstock. Calving is all year round and about a third of the milk is used for cheesemaking, with the rest sold wholesale to Arla.

The cows are winter fed on a total mixed ration based on maize, lucerne and grass silage, and out at grass in summer, topped up with concentrate in the parlour. The herd is currently averaging 7,500 litres a year, 4.16% butterfat and 3.49% protein.

Purchased feed costs average 5.7ppl, 13 cows have classified Ex and 31 as VG, and the average annual rainfall is 24 inches or 600mm.

The farm also has an anaerobic digester on site, which means that manures and lower-quality silage can be fed to the digester and energy can be used throughout the dairy and cheesemaking enterprise. The excess heat is also used for drying grain and heating houses on the farm.

Stephen explains: "We use carbon-neutral fuel wherever possible. We are currently using methane from the biogas plant to generate up to 170kW of electricity for the grid and our own use."

Copys Green Farm has made a commitment to improving the carbon footprint of its operations, including using precision fertiliser application, which has reduced the amount used and increased the efficiency of use. The farm uses a large amount of digestate in place of artificial fertiliser.

Stephen’s soil consists of a sandy loam over chalk, vulnerable to coastal wind erosion. To combat the issue of soil erosion, he uses a Duro-France strip tillage implement to plant his crops of maize.

Strip tillage reduces energy use, improves soil conservation, and lessens the potential for soil erosion. However, the rest of the farm is run under a zero-tillage, regenerative system which has allowed the farm to see improvements to soil health, biodiversity and improved nutrient retention.

He points out the importance of actively managing nutrients, bringing benefits to both the business and the environment. "Keeping any fertility in the soil minimises losses to the environment and reduces our reliance on bagged fertiliser," he adds.

Looking to the future, Stephen says: "Dairy farm sustainability is not just about use of special technologies or techniques, it is about the whole approach to the farming operation as well as attention to detail on each aspect. Because of the gradual and continuous change involved, it has been hard to quantify financial benefits, but the dairy herd has moved from loss making to being profitable.

"Over the past 15 years or so, we have been making steps to improve the sustainability of our operation, starting with making a proportion of the milk into cheese, then moving to a healthier herd of Brown Swiss cows."

Tried and Tested has produced a toolkit of free resources and guidance aimed at helping farmers improve their nutrient-management planning. All resources can be ordered as a hard copy or downloaded via the Tried and Tried tools page.