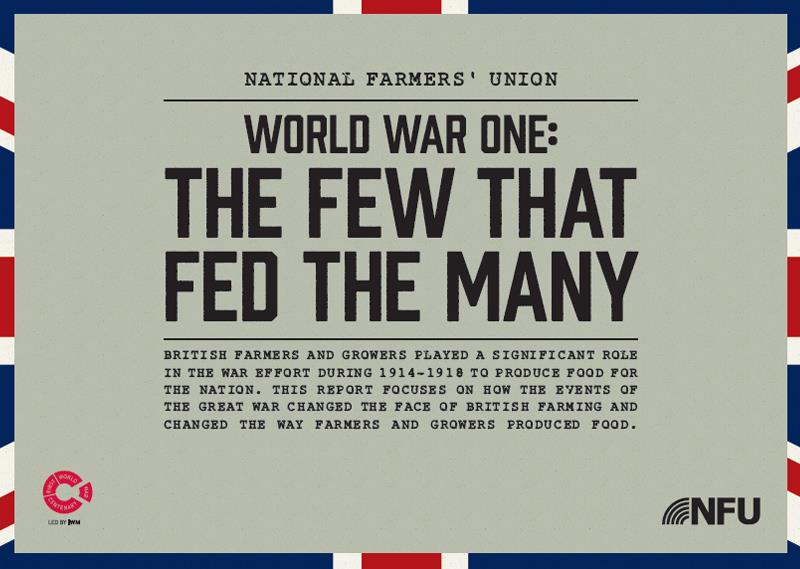 British farmers and growers played a significant role in the war effort during 1914-1918 to produce food for the nation.

The Few That Fed The Many focuses on how the events of The Great War changed the face of British farming and changed the way farmers and growers produced food.

In 2014, the NFU marked the centenary of the start of the First World War by commissioning a report - The Few That Fed The Many - which investigated the impact that the Great War had on British farming families, read it here.

More than 170,000 farmers fought in the trenches and up to half a million farm horses were requisitioned by the War Office to help at the front line. Faced by a lack of labour, farms adapted the way they worked to meet the food production challenge.

A total of 98,000 extra women from the Women’s Land Army worked on farms to fill the void left by men. A further 66,000 soldiers returned from the frontline to help with the harvest. And, crucially, tractors began to do the work of many hands. In 1917, the Government bought 400 British Saunderson Tractors and a further $3.2million was invested in US models such as the Fordson.

By 1918, there were 6,000 tractors in operation in Britain. The 'Ploughing Up' campaign of 1917 saw an extra 2.5 million acres of land used for growing cereals.

By the end of the war, an extra 915,000 tonnes of oats, 1.7million tonnes of potatoes and 830,000 tonnes of wheat were grown. And thanks to the work of British farmers and growers, the country avoided being starved into submission.

More about the impact of World War One on farming:

Farming and the First World War: The role of stately homes

Farming and the First World War: Changes in democracy

Farming and the First World War: Mechanisation and the workhorses of war

Farming and the First World War: The humble pea

Farming and the First World War: The Women's Land Army

Farming and the First World War: The blind farmer

How the countryside recovered from World War One​

The Few That Fed The Many: Special publication on the role farming played during World War One​

Looking back over the past 100 years, British agriculture has come a long way.

The infographic ‘Then & Now’ shows just how far The First World War changed the face of British farming and food production, forever.

The lessons learned by farmers, growers, policy makers and society continue to influence the decision making process in the 21st century. 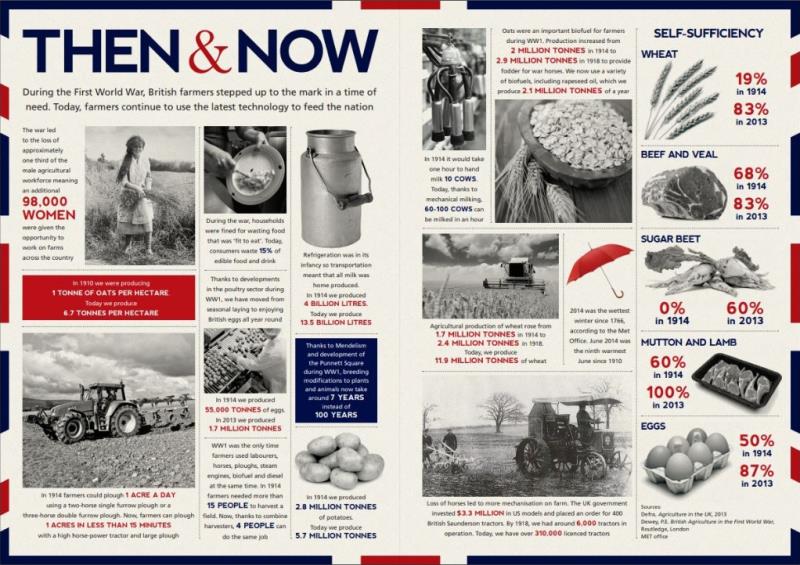